بحث
Recording a performance in Adobe Character Animator is as easy as pressing the red record button, but this tutorial goes deeper with how to arm and disarm behaviors, blend multiple takes together, edit lip sync tracks, and create composites in Adobe Premiere Pro or Adobe After Effects. 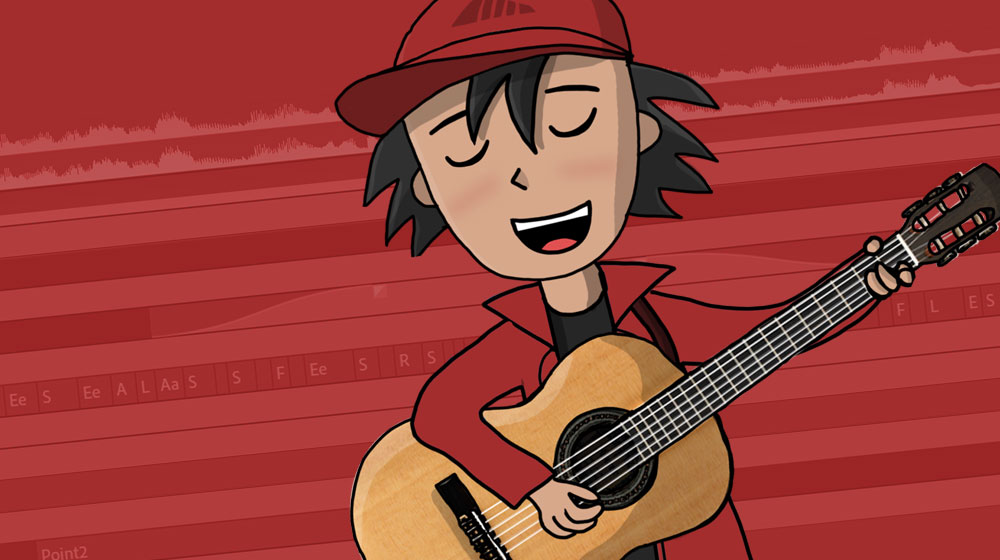 Get familiar with the basics of recording in Character Animator.

Adobe Character Animator allows you to create a character performance using your face, voice, and other inputs like triggers, draggers, sliders, and more. When you click the red record button, Character Animator records your performances, which show up in the timeline as takes. You can record as many takes as you want, and then edit them, from changing individual mouth shapes to blending multiple performances together.

In the Start workspace, let’s get started by clicking the template puppet Chloe. This will open her original Photoshop file, but we won’t be editing any artwork in this tutorial, so we can go ahead and quit Photoshop. Back to Character Animator, we should now be in the Record workspace and see Chloe moving and talking along with us in a new scene.

We’re controlling Chloe because her track is selected in the timeline and has a red dot next to her. Anytime we see a red dot, it means something is armed, taking in live input and ready for recording. The same is true of the Behaviors we see in the Properties panel on the right.

We’ll start with a simple recording of Chloe waving and saying hello. First, get in a comfortable position and click the “Set Rest Pose” button to calibrate your character. Then we’ll pose Chloe’s arms on her hips by dragging them into place. Finally, click the red record button in the Scene panel. We’ll see a short countdown and then we can act. We’ll tilt our head to one side, say “Hello World,” and drag the right arm with the mouse to wave. When we’re done, we can click the record button again to stop, or the spacebar key as a shortcut.

Now we should see several things appear in our timeline - the audio track of our voice talking, as well as several behavior takes. Kind of like how a song is made up of layered instruments like drums, guitar, and vocals, Character Animator performances are made up layering behaviors. We can review our recording by clicking the “Go to Start” button and then clicking Play or the spacebar key. We can also scrub through a performance by dragging the blue current time indicator around. To get a closer view, we can also click the zoom in and out icons in the bottom-right corner of the timeline, or drag the slider in the middle.

What you learned: Record a simple performance

Let’s say we want to make a small adjustment, and tilt the head the other way when Chloe finishes talking. Instead of recording the whole performance again, we can just focus on this one section and add a new shorter take for the head performance. Let’s scrub over to that part of the timeline, and then disarm the behaviors on the right that we don’t want to bring in any new data for by clicking the red dots next to them. In this case, we can disarm Dragger, Eye Gaze, Lip Sync, and Triggers. We can also click to turn off the microphone icon in the Camera & Microphone panel so we won’t record any additional audio.

So now, only the Face behavior, which includes head and eyebrow movement, is looking for live data. We can’t drag the arms or move our pupils or see the lip sync working, because those behaviors have been disarmed. Arming and disarming behaviors is a common way to focus on one performance element at a time.

Now we can tilt our head to the side, press record, and record the new head position for just a second or so, pressing record again or spacebar when we’re done. In the timeline, a new short Face take 2 has appeared on top of the existing Face take 1. Whatever take is on top is what’s visible, and occluded takes get darkened below.

We’re still bringing in live data, so let’s disarm Chloe by clicking the red dot next to her. Now we won’t be seeing anything live, just the prerecorded timeline data.

If we play our timeline, however, there are very abrupt transitions when the new take begins and ends. We can smooth this out by using blend handles, dragging the little squares in the upper corners of the take. Blending is a way to smoothly transition in and out of multiple takes. Now if we play the timeline we should see a nicer transition between the different face takes.

We can also drag the middle of the take to show up earlier or later, or drag the edges to shorten or lengthen the performance. If we drag the edge of a take beyond the length of the original recording, it will hold on the closest adjacent frame, and slanted lines appear on the take bar to indicate where a held frame is.

If we arm Chloe’s track again along with the Dragger take, and try to record another take dragging the arms, we might be surprised that the previous arm waving animation doesn’t seem to show up. This is because there is only one Dragger behavior on the puppet, and since it’s armed, it’s looking for new live dragger takes, which trumps what we’ve already recorded. Any time a behavior is armed, it’s essentially ignoring anything in the timeline and favoring the live performance.

A simple way around this is to go to Rig mode, select the top level Character, and click the + next to Behaviors to add a second Dragger behavior. Now we can click the menu icon next to each behavior to rename them, calling the first one Right Hand and the new one Left Hand. Now go back to Record mode and disarm the Right Hand, the one we already recorded the hand wave with, and instead just arm the Left Hand. Now if we press record, we’ll see the Right Hand animation wave while allowing us to record the left hand independently.

What you learned: Add and edit takes in the timeline

There are a couple of ways to record triggers. For this performance, let’s have Chloe close her eyes when she says Hello and swap in a hand position with her palm facing the other way. If we click in the Triggers panel on the left, we can see that the 3 key is set to switch the palm around, and the B key will hold on the blink state. Another way to visualize this is in the Controls panel, which we can get to by clicking the Controls tab directly next to the timeline. We can disarm the Face behavior and only arm Triggers, then press record to get started. When the timing is right, we can either click the Controls panel icons or the keyboard keys to activate these triggers.

Going back to the Timeline panel, we can disarm Chloe so we’re just seeing recorded data, and see the trigger takes now appearing below as expected. We can trim or move the bars however we want to get the timing just right. Because both of these are swap set triggers, we could also right-click these triggers to change them to another state. We can also right-click any gaps to easily add a new trigger state instead of needing to record another performance.

The viseme take shows the mouth shapes that Character Animator automatically detected to fit the audio. We can drag the edges of visemes to change their duration, or right-click a viseme to swap in a different one. Lip sync editing is a critical part of a compelling performance, so it’s always worth it to spend a little time making sure the right mouths seem to be lining up with the right words.

If you want to use a prerecorded audio track as your character’s voice, just go to File > Import and select an audio file. Then drag the audio file into the timeline to add it to your scene. Finally, make sure your puppet track and the Lip Sync behavior are both armed, and go to Timeline > Compute Lip Sync from Scene Audio. This will analyze the audio track and match the words with the appropriate visemes.

What you learned: Add and edit trigger and lip sync takes

Use helpful tools like slo-mo recording and the work area bar.

The Transform and Physics behaviors have smaller dots next to them. This is because they are passive behaviors - in most cases, you don’t have to worry about arming or disarming them - they just work passively behind the scenes. The same is true of the parameters inside each behavior. So if we adjust Transform’s Position X or Rotation, either in the Properties panel Behaviors or Controls panel sliders, we usually don’t have to arm anything because these are set values in the background that don’t need to change over time. However, if we wanted Chloe to move horizontally, we would arm Position X in either the Properties or Controls panel, press record, and adjust the values during recording. Then Transform > Position X will show up in the timeline, along with a take bar representing the performance.

Going to Timeline > Enable Work Area will show you a Work Area Bar that you can drag the middle of to reposition, or drag the edges to adjust the duration. You can also disable or enable it by clicking the bar or darkened area at the top of the timeline. When playing back, the playhead will loop when it reaches the end, allowing you a way to isolate and focus on a particular section of the timeline.

Playback and Recording Speed controls can be accessed by clicking the numbers next to the record button. Slower playback speeds can make it easier to review the timing of recorded sections. Slower recording speeds can give you more time to react and perform, and often lead to smoother, faster motion when played back at full speed.

Recording in Character Animator is a fun way to naturally move and talk to bring your creations to life. And if you make a mistake or want to emphasize a particular emotion, to can always record and blend in additional takes to fine-tune your performances. So try recording your animated stories, and have fun.

What you learned: Refine performances with record & edit tools