About the Generate PDF Service

The Generate PDF service converts native file formats to PDF. It also converts PDF to other file formats and optimizes the size of PDF documents.

The Generate PDF service uses native applications to convert the following file formats to PDF. Unless otherwise indicated, only the German, French, English, and Japanese versions of these applications are supported. Windows only indicates support for only Windows Server® 2003 and Windows Server 2008.

The Generate PDF service converts PDF to the following file formats (Windows only):

The Generate PDF service requires that you perform these administrative tasks:

These tasks are described in Installing and Deploying AEM forms Using JBoss Turnkey.

You can accomplish these tasks using the Generate PDF service:

This section describes how you can use the Generate PDF API to programmatically convert a Microsoft Word document to a PDF document.

To convert a Microsoft Word document to a PDF document, perform the following tasks:

Retrieve the file to convert to a PDF document

Retrieve the Microsoft Word document to convert to a PDF document.

Convert the file to a PDF document

After you create the Generate PDF service client, you can invoke the createPDF2 method. This method needs information about the document to convert, including the file extension.

Convert a Microsoft Word document to a PDF document by using the Generate PDF API (Java):

This section describes how you can use the Generate PDF API to programmatically convert HTML documents to PDF documents.

To convert an HTML document to a PDF document, perform the following tasks:

Retrieve the HTML content to convert to a PDF document

After you create the service client, you can invoke the appropriate PDF creation operation. This operation needs information about the document to be converted, including the path to the target document.

After the HTML content is converted to a PDF document, you can retrieve the results and save the PDF document.

To convert a PDF document to any of the supported types, perform the following steps:

Retrieve the PDF document to convert

Retrieve the PDF document to convert to a non-image format.

After you create the service client, you can invoke the PDF export operation. This operation needs information about the document to be converted, including the path to the target document.

Save the converted file

Convert a PDF document to an RTF file by using the Generate PDF API (Java):

Convert a PDF document to an RTF file by using the Generate PDF API (web service):

This section explains how to add support for additional native file formats. It provides an overview of the interactions between the Generate PDF service and the native applications that this service uses to convert native file formats into PDF.

This section also explains the following:

This illustration shows the components and drivers involved with native application support. It also mentions the XML grammars that influence the interactions.

This document uses the term native application to indicate the application used to produce a native file format, such as Microsoft Word.

AppMon is an enterprise component that interacts with a native application in the same way a user would navigate through the dialog boxes presented by that application. The XML grammars used by AppMon to instruct an application, such as Microsoft Word, to open and print a file involve these sequential tasks:

AppMon uses standard Win32 APIs to interact with third-party applications in order to transfer UI events such as key-strokes and mouse clicks, which is useful to control these applications to produce PDF files from them.

Due to a limitation with these Win32 APIs, AppMon is not able to dispatch these UI events to some specific kinds of windows, such as floating menu-bars (found in some applications such as TextPad), and certain kind of dialogs whose contents cannot be retrieved using the Win32 APIs.

It is easy to visually identify a floating menu-bar; however it might not be possible to identify the special types of dialogs just by visual inspection. You would require a third-party application such as Microsoft Spy++ (part of the Microsoft Visual C++ development environment) or its equivalent WinID (that can be downloaded free of cost from http://www.dennisbabkin.com/php/download.php?what=WinID) to examine a dialog to determine if AppMon would be able to interact with it using standard Win32 APIs.

If WinID is able to extract the dialog contents such as the text, sub-windows, window class ID, and so on, then AppMon would also be able to do the same.

This table lists the type of information used in printing native file formats.

This section and the next section use different terminology for dialog boxes and the components they contain, depending on the perspective being described. Dialog box components are items such as buttons, fields, and combo boxes.

When this section and the next section describe dialog boxes and their components from the perspective of a user, terms such as dialog box, button, field, and combo box are used. 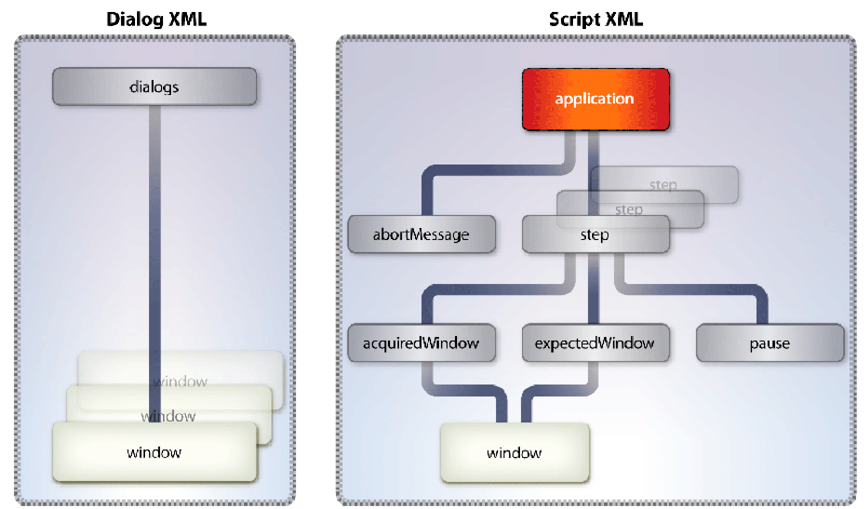 Hierarchy of script and dialog XML

A script XML file specifies a series of steps that direct the native application to navigate to certain window elements and then supply responses to those elements. Most responses are text or keystrokes that correspond to the input a user would provide to a field, combo box, or button in the corresponding dialog box.

The steps in a script XML file are executed in order, without any opportunity for branching. The only conditional test supported is for time-out/retry, which causes a script to terminate if a step does not complete successfully within a specific period of time and after a specific number of retries.

In addition to steps being sequential, the instructions within a step are also executed in order. You must ensure that the steps and instructions reflect the order in which a user would perform those same steps.

Each step in a script XML file identifies the window element that is expected to appear if the step’s instructions are successfully performed. If an unexpected dialog box appears while executing a script step, the Generate PDF service searches the dialog XML files as described in the next section.

When the system or native application displays a dialog box that is not handled by the currently executing script XML file, the Generate PDF service searches the dialog XML files in this order, stopping when it finds a match:

If the Generate PDF service encounters a dialog box that is not described in any of the previously-listed files, the Generate PDF service incorporates the dialog box’s caption into the log file entry. The currently executing job eventually times out. You can then use the information in the log file to compose new instructions in the additional dialog XML file for the native application.

Before you can add or modify support, you must complete the following tasks.

The dialog and script XML files require you to identify the window element (dialog box, field, or other dialog component) to which your dialog or script element is responding. For example, after a script invokes a menu for a native application, the script must identify the window element on that menu to which keystrokes or an action are to be applied.

Any one or a combination of these three attributes can be used to identify a window.

Be aware of these issues:

If you plan to work on dialog or script XML files, you should install the application Microsoft Spy++.

The dialog and script files reside in the appmondata.jar file. Before you can modify any of these files or add new script or dialog files, you must unpackage this JAR file. For example, assume that you want to add support for the EditPlus application. You create two XML files, named appmon.editplus.script.en_US.xml and appmon.editplus.script.addition.en_US.xml. These XML scripts must be added to the adobe-appmondata.jar file in two locations, as specified below:

To redeploy the GeneratePDF component

The script contains instructions that navigate through the native application’s window elements and that supply specific responses to those elements. The file that contains this information is appmon.[appname].script.[locale].xml. An example is appmon.notepad.script.en_US.xml.

Using the native application, determine the window elements that you must navigate and each response you must perform to print the document. Notice the dialog boxes that result from any response. The steps will be similar to these steps:

Use Microsoft Spy++ to obtain the identities of window element properties in the native application. You must have these identities to write scripts.

You must order window and windowList elements as follows:

In this context, the term additional means the contents of the appmon.[applicationname].addition.[locale].xml file. Such a file specifies overrides and additions to the dialog XML file.

You can also modify the additional dialog XML file for a native application for these purposes:

The file name that identifies an additional dialogXML file is appmon.[appname].addition.[locale].xml. An example is appmon.excel.addition.en_US.xml.

The name of the additional dialog XML file must use the format appmon.[applicationname].addition.[locale].xml, where applicationname must exactly match the application name used in the XML configuration file and in the script.

None of the generic applications specified in the native2pdfconfig.xml configuration file have a primary dialog XML file. The section Adding or modifying support for a native file formatdescribes such specifications.

The name of the application is specified as the value of the GenericApp element’s name attribute. This value must exactly match the corresponding name specified in the script that you develop for that application. Likewise, the GenericApp element’s displayName attribute should exactly match the corresponding script’s expectedWindow window caption. Such equivalency is evaluated after resolving any regular expressions that appear in the displayName or caption attributes.

In this example, the default configuration data supplied with the Generate PDF service was modified to specify that Notepad (not Microsoft Word) should be used to process files with the file name extension .txt. Before this modification, Microsoft Word was specified as the native application that should process such files.

After creating the new environment variable, you must restart the server on which the Generate PDF service is deployed.

Create a system variable in the Windows XP environment

Create a system variable from the command line

AEM Forms includes sample XML files that cause the Generate PDF service to use Notepad to process any files with the file name extension .txt. This code is included in this section. In addition, you must make the other modifications described in this section.

This example contains the additional dialog boxes for the Notepad application. These dialog boxes can be in addition to the ones specified by the Generate PDF service.

This example specifies how the Generate PDF service should interact with Notepad to print files by using the Adobe PDF printer.