Modern websites rely heavily on client-side processing driven by complex JavaScript and CSS code. Organizing and optimizing the serving of this code can be a complicated issue.

To help deal with this issue, AEM provides Client-side Library Folders, which allow you to store your client-side code in the repository, organize it into categories, and define when and how each category of code is to be served to the client. The client-side library system then takes care of producing the correct links in your final webpage to load the correct code.

How Client-Side Libraries Work in AEM

The standard way to include a client-side library (that is, a JS or CSS file) in the HTML of a page is simply to include a <script> or <link> tag in the JSP for that page, containig the path to the file in question. For example,

While this approach works in AEM, it can lead to problems when pages and their constituent components become complex. In such cases there is the danger that multiple copies of the same JS library may be included in the final HTML output. To avoid this and to allow logical organization of client-side libraries AEM uses client-side library folders.

A client-side library folder is a repository node of type cq:ClientLibraryFolder. It's definition in CND notation is

By default, cq:ClientLibraryFolder nodes can be placed anywhere within the /apps, /libs and /etc subtrees of the repository (these defaults, and other settings can be controlled through the Adobe Granite HTML Library Manager panel of the System Console).

Because HTL is the preferred technology for developing AEM sites, HTL should be used to include client-side libraries in AEM. However it is also possible to do so using JSP.

Each helper template expects a categories option for referencing the desired client libraries. That option can be either an array of string values, or a string containing a comma separated values list.

For further details and exmple of usage, see the document Getting Started with the HTML Template Language.

For example, the /etc/clientlibs/foundation/jquery node is of type cq:ClientLibraryFolder with a categories property of value cq.jquery. The following code in a JSP file references the libraries:

Create a cq:ClientLibraryFolder node to define JavaScript and Cascading Style Sheet libraries and make them available to HTML pages. Use the categories property of the node to identify the library categories to which it belongs.

For information about requirements that are specific to client libraries for widgets, see Using and Extending Widgets.

The web client must have permissions to access the cq:ClientLibraryFolder node. You can also expose libraries from secured areas of the repository (see Embedding Code From Other Libraries, below).

In previous versions, client library folders were located below /etc/clientlibs in the repository. This is still supported, however it is recommended that client libraries now be located under /apps. This is to locate the client libraries near the other scripts, which are generally found below /apps and /libs.

Static resources below the client library folder must be in a folder called resources. If you do not have the static resources, such as images, under the folder resources, it cannot be referenced on a publish instance. Here is an example: http://localhost:4503/etc.clientlibs/geometrixx/components/clinetlibs/resources/example.gif

In order to better isolate code from content and configuration, it is recommended to locate client libraries under /apps and expose them via /etc.clientlibs by leveraging the allowProxy property.

In order for the client libraries under /apps to be accessible, a proxy servelt is used. The ACLs are still enforced on the client library folder, but the servlet allows for the content to be read via /etc.clientlibs/ if the allowProxy property is set to true.

A static resource can only be accessed via the proxy, if it resides below a resource below the client library folder.

Then you set the allowProxy property on foo to true.

When using proxied client libraries, the AEM Dispatcher configuration may require an update to ensure the URIs with the extension clientlibs are allowed.

Adobe recommends locating client libraries under /apps and making them available using the proxy servlet. However keep in mind that best practice still requires that public sites never include anything that is served directly over an /apps or /libs path.

For example, the /etc/clientlibs/myclientlibs/publicmain has a dependency on the cq.jquery library. The JSP that references the main client library generates HTML that includes the following code:

Embedding code is useful for providing access to libraries that are stored in secured areas of the repository.

Use the categories property to identify the client library folder to embed. To embed the library, add a property to the embedding cq:ClientLibraryFolder node, using the following property attributes:

In some cases you may find that the final HTML generated for typical page by your publish instance includes a relatively large number of <script> elements, particularly if your site is using client context information for analaytics or targeting. For example, in a non-optimized project you might find the following series of <script> elements in the HTML for a page:

In such cases, it can be useful to combine all the required client library code in to a single file so that the number of back and forth requests on page load is reduced. To do this you can embed the required libraries into you app-specific client library using the embed property of the cq:ClientLibraryFolder node.

The following client library categories are incuded with AEM. You should embed only those that are required for he functioning of your particular site. However, you should maintain the order listed here:

When you embed CSS files, the generated CSS code uses paths to resources that are relative to the embedding library. For example, the publicly-accessible library /etc/client/libraries/myclientlibs/publicmain embeds the /apps/myapp/clientlib client library: 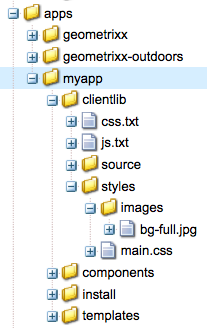 The CSS file that the publicmain node generates contains the following style, using the URL of the original image:

To associate a client library folder with a device group, add a property to your cq:ClientLibraryFolder node with the following attributes:

For example, the following table lists the value of the channels property for each client library folder of the cq.widgets category:

AEM allows for pluggable preprocessors and ships with support for YUI Compressor for CSS and JavaScript and Google Closure Compiler (GCC) for JavaScript with YUI set as AEM's default preprocessor.

The pluggable preprocessors allow for flexible usage including:

Do not place a minified library in a client library. Instead provide the raw library and if minification is required, use the options of the preprocessors.

You can choose to configure the preprocessors configuration per clientlibrary or system-wide.

For further details on GCC options, see the GCC documentation.

YUI is set as the default minifier in AEM. To change this to GCC, follow these steps.

To trace the origin of embedded code, or to ensure that embedded client libraries are producing the expected results, you can see the names of the files that are being embedded at runtime. To see the file names, append the debugClientLibs=true parameter to the URL of your web page. The library that is generated contains @import statements instead of the embedded code.

The /libs/cq/granite/components/dumplibs/dumplibs component generates a page of information about all client library folders on the system. The /libs/granite/ui/content/dumplibs node has the component as a resource type. To open the page, use the following URL (changing the host and port as required):

The information includes the library path and type (CSS or JS), and the values of the library attributes, such as categories and dependencies. Subsequent tables on the page show the libraries in each category and channel.

The dumplibs component includes a test selector that displays the source code that is generated for ui:includeClientLib tags. The page includes code for different combinations of js, css, and themed attributes.

The HTML Library Manager service processes cq:ClientLibraryFolder tags and generates the libraries at runtime. The type of environment, development or production, determines how you should configure the service: