This document will break down and explain each of the configuration files deployed in a standard built dispatcher server provisioned in Adobe Managed Services. Their use, naming convention, etc...

Apache Webserver doesn't actually care what the file extension is of a file when targeting it with an include or includeoptional statement.  Naming them properly with names that eliminate conflicts and confusion helps a ton. Names used will describe the scope of where the file is applied it makes life easier. If everything is named .conf this gets really confusing. We want to avoid poorly named files and extensions.  Below is a list of the different custom file extensions and naming conventions used in a typical AMS configured dispatcher.

When following the naming convention you can avoid some pretty easy to make mistakes that can have catastrophic results.  We will cover a few examples.

As a site Example for ExampleCo two configuration files were created by the developers of the dispatcher configurations.

The file names are the same

If the vhost file is accidentally put in the rewrites folder and the rewrites file is put into the vhosts folder.  It would appear to be deployed by filename properly, yet Apache will throw an error and the problem will not be immediately apparent.

If the two files are downloaded to the same location they can either overwrite themselves or make it indistinguishable making the deployment process a nightmare.

The file extensions are the same and auto-include prone

The file extensions are the same and uses auto-included extension that Apache will auto include any .conf files in many of it's default folders.

Name the files base on what they do and safely out of the auto-include rules namespace.

If it's a virtual host file name it with .vhost as the extension.

If it's a rewrite rule file, name it with <site>_rewrite.rules as the suffix and extension. This naming convention will make it clear which site it's for and that it's a set of rewrite rules.

If it's a IP whitelist rule file, name it <description>_whitelist.rules as the suffix and extension. This naming convention will give some description of what it's for and that it's a set of IP matching rules.

Using these naming conventions will avoid issues, if a file gets moved into an auto-include directory that it doesn't belong.

For example putting a file named with .rules, .any, or .vhost in the auto-include folder of /etc/httpd/conf.d/ wouldn't have any affect.

If a deployment change request says "please deploy exampleco_rewrite.rules to production dispatchers", the person deploying the changes can already know that they aren't adding a new site, they're just updating rewrite rules as indicated by the filename.

As seen in the diagram above the httpd binary only looks to the httpd.conf file as it's configuration file.  That file contains the following statements in it:

When we applied our standard we added some additional file types and includes of our own.

Here is the AMS baseline directories and top level includes 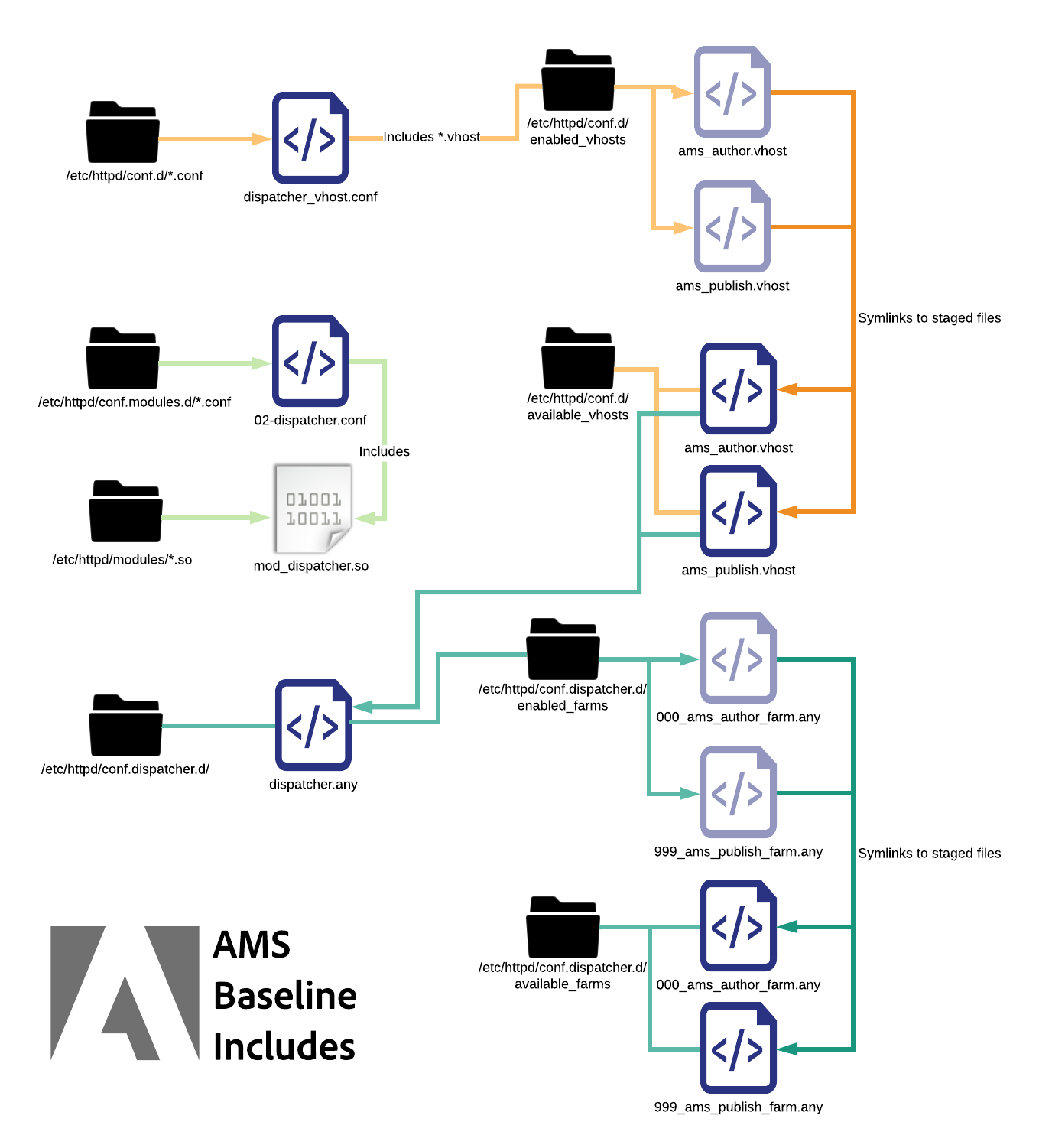 Building off Apache's baseline we show how AMS created some addtional folders and top level includes for conf.d folders as well as module specific directories nested under /etc/httpd/conf.dispatcher.d/

When apache loads it will pull in the /etc/httpd/conf.modules.d/02-dispatcher.conf and that file will include the binary file /etc/httpd/modules/mod_dispatcher.so into it's running state.

To use the module in our <VirtualHost /> we drop a configuration file into /etc/httpd/conf.d/ named dispatcher_vhost.conf and inside this file you'll see use setup the basic parameters needed for the module to work:

As you can see above this includes the top level dispatcher.any file for our dispatcher module to pick up it's configuration files from /etc/httpd/conf.dispatcher.d/dispatcher.any

Pay attention to the contents of this file:

The top level dispatcher.any file includes all of the enabled farm files that live in /etc/httpd/conf.dispatcher.d/enabled_farms/ with the file name of <FILENAME>_farm.any which follows our standard naming convention.

Later in the dispatcher_vhost.conf file mentioned earlier we also do an include statement to enable each enabled virtual host files that live in /etc/httpd/conf.d/enabled_vhosts/ with the filename of <FILENAME>.vhost which follows our standard naming convention.

In each of our .vhost files you'll note the dispatcher module gets initialized as a default file handler for a directory.  Here is an example .vhost file to show the syntax:

After the top level includes resolve they have other sub includes that are worth mentioning.  Here is a high level diagram on how the farms and vhosts files include other sub elements 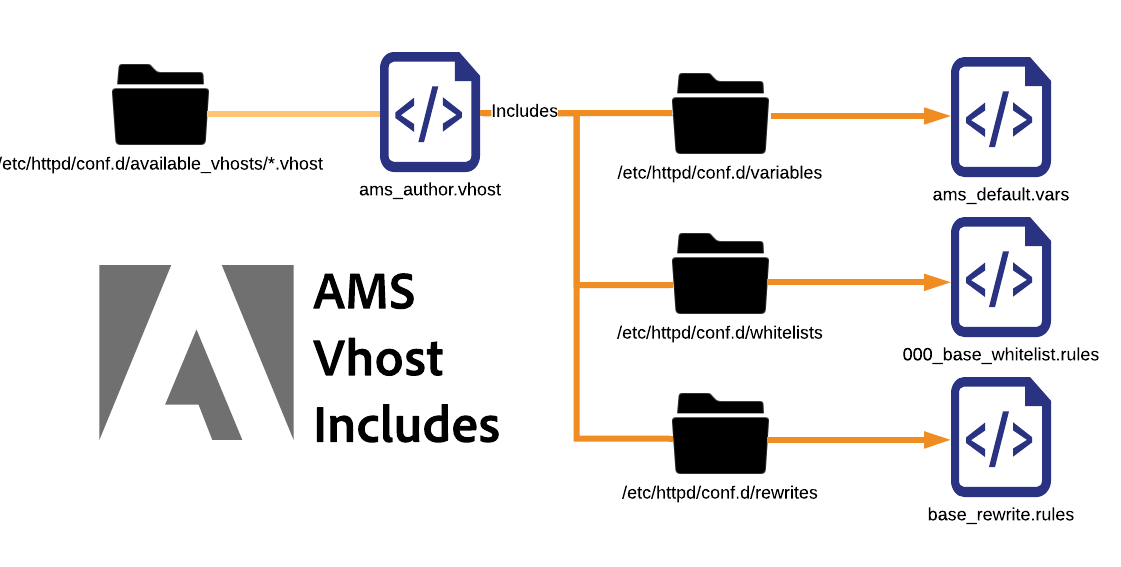 The .vhost files have sub includes based on common pieces we have found.  Things like variables, whitelists, and rewrite rules.

The .vhost file will have include statements for each file based on where they need to be included in the .vhost file.  Here is an example syntax of a .vhost file as a good reference:

As you can see in the above example there is an include for the variables needed in this configuration file that are later used.

Inside the file /etc/httpd/conf.d/variables/weretail.vars we can see what variables are defined:

You can also see a line that includes a list of whitelist.rules files that restrict who can view this content based on different whitelist criteria.  Lets look at the contents of one of the white list files /etc/httpd/conf.d/whitelists/weretail_mainoffice_whitelist.rules:

You can also see a line that includes a set of rewrite rules.  Let's take a look at the contents of the weretail_rewrite.rules file: 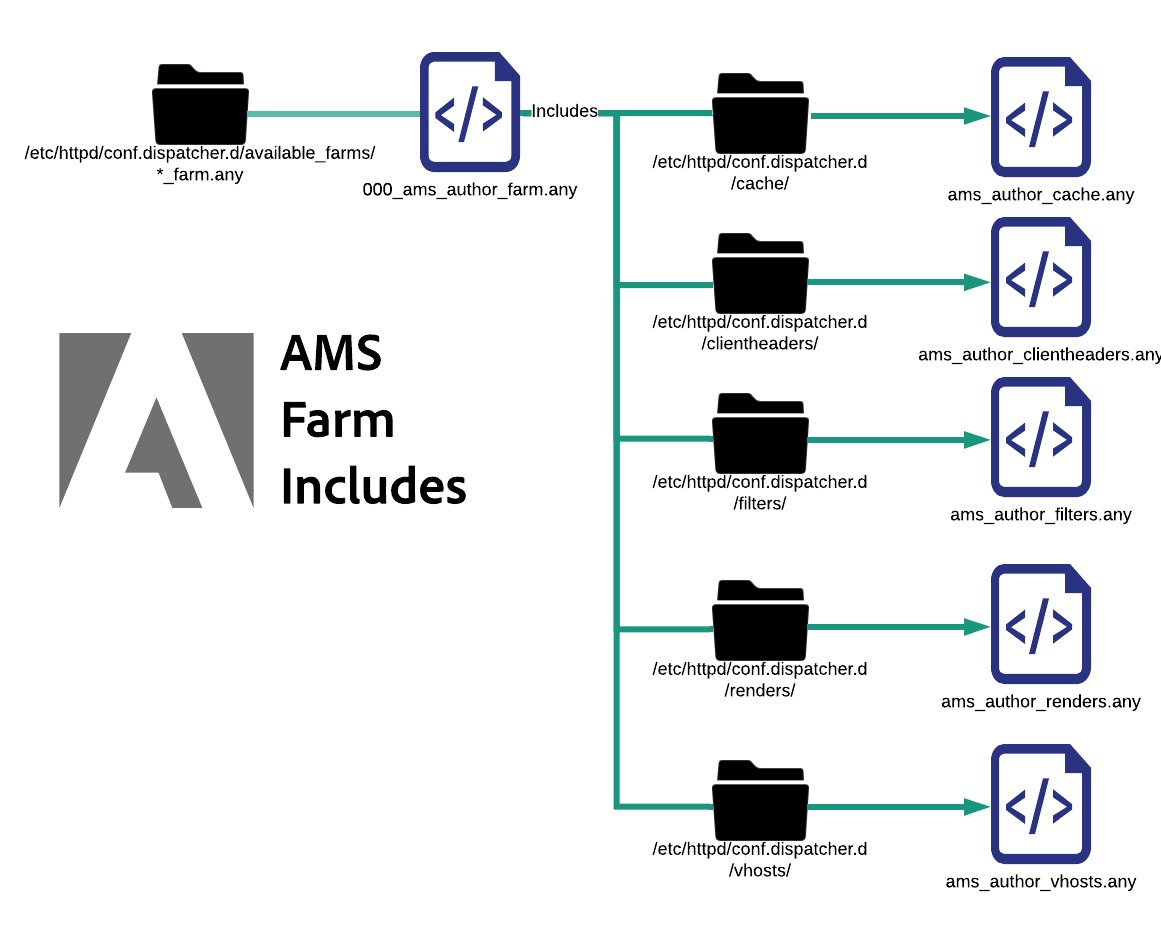 The farm files have sub includes based on top level sections of the farm like cache, clientheaders, filters, renders, and vhosts.

As you can see each section for the weretail farm instead of having all of the syntax needed it's instead using an include statement.

As you can see it's a new line seperated list of domain names that should render from this farm over the others.

Next let's look at the /etc/httpd/conf.dispatcher.d/filters/weretail_search_filters.any: