Get file
An AEM 6.4 component with a dialog that has granite/coral resource types. Based on Core Component dialog structures

You can download an AEM package that contains code and the OSGi bundle that are used in this article. Download the package and deploy using package manager. The purpose of this code is to show the community these concepts in action. That is, it's to illustrate how to write a tab-based HTL component that displays Digital Assets. This community code is for teaching purposes only and not meant to go into production as is.

You can view the application by using the following URL:

http://localhost:4502/editor.html/content/moviecomponent/en.html (assuming you deploy on author).

To successfully use the Movie component, you must white list this bundle after you deploy the package. The Bundle-Symbolic name is aemMovie63.core. For information on how to configure a white list for a bundle, see https://forums.adobe.com/thread/2355506.

You can develop a custom Adobe Experience Manager (AEM) HTL tab-based component that lets your web site visitors engage with your site by performing these tasks:

You can develop the tab-based component by using HTL and AEM digital assets, such as videos and images. The following illustration shows the tab-based movie component developed in this community article. Although this component is based on a movie use case, the AEM development concepts discussed in this article can be directly applied to other AEM HTL components that use tabs and display digital assets.

The titles displayed in the component's tabs are all configurable by using a dialog. That is, an author can set them, as shown in this illustration. 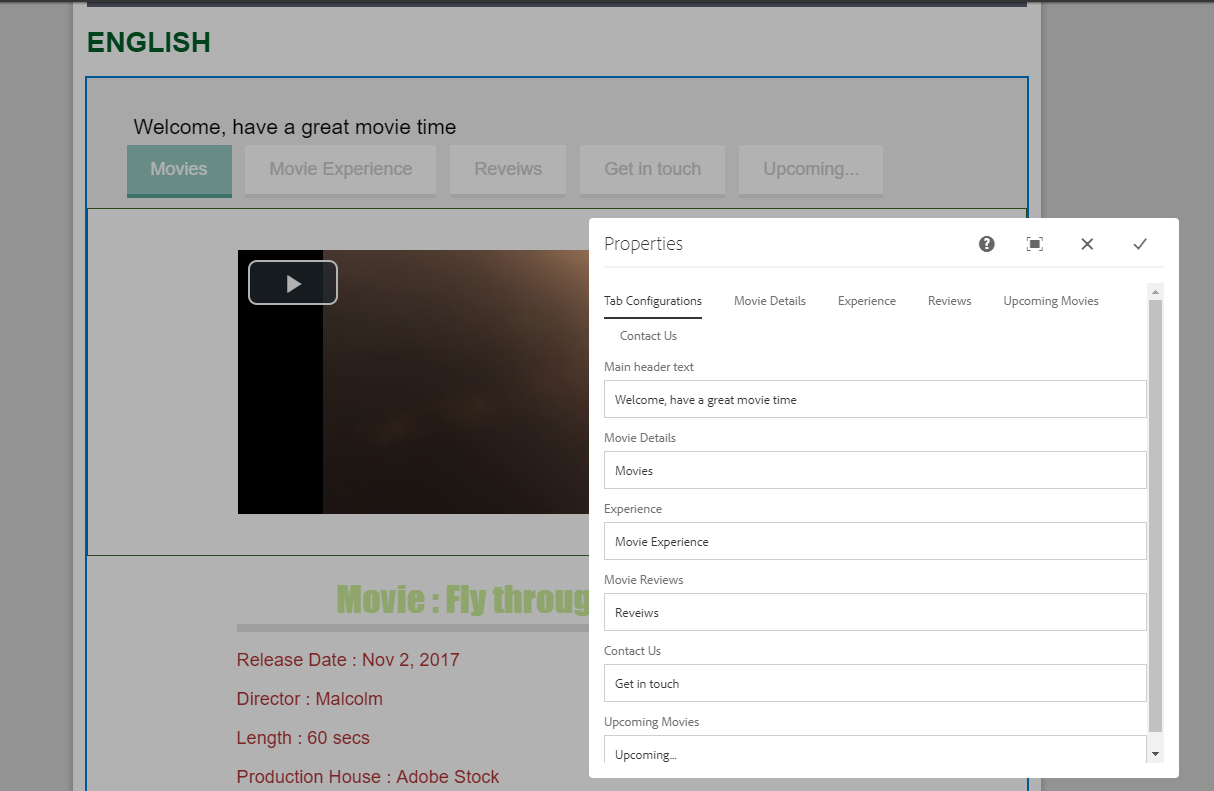 Tabs located in the Movie component

The Movie Experience tab lets an author enter a video that represents a movie trailor. The video is typically located in the AEM DAM. The following list describes the values that an AEM author enters in the dialog: 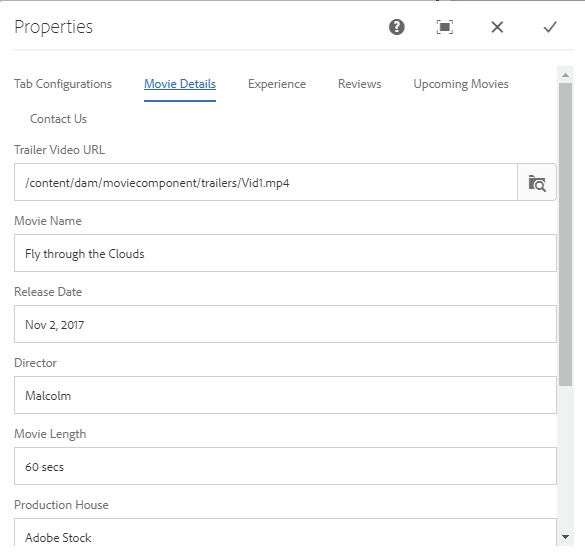 The Experience tab lets an author enter review information related to the movie. The following illustration shows this dialog. 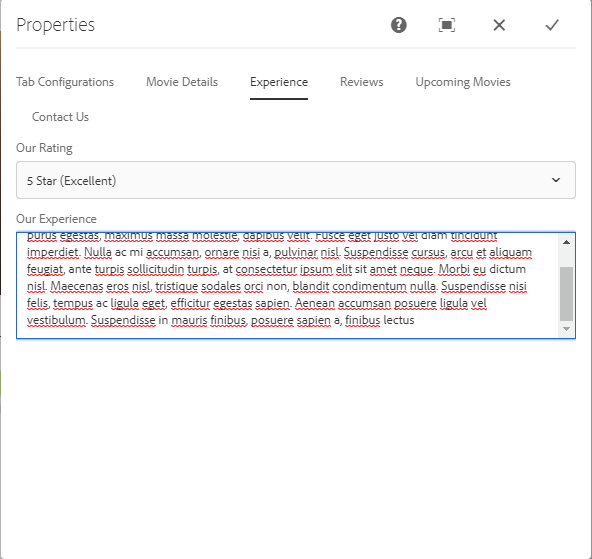 The Review view consists of a second tab that represents feedback from the community. The following illustration shows the dialog. 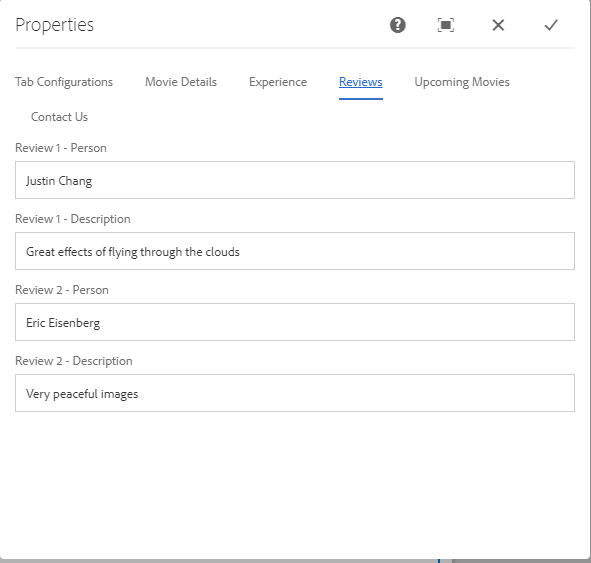 In a real world implementation, the above dialog would be implemented using a Multifield control. For information about Multifields and AEM, see Creating an AEM HTML Template Language 6.3 component that uses a Multifield .

The Upcoming Movie tab lets an author specify an AEM DAM location and the number of assets to display in the HTL component. The following illustration shows this dialog tab. 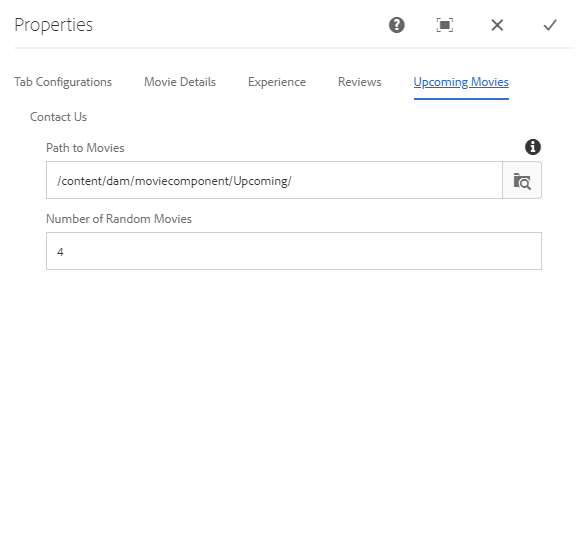 The Paths to Movies is a pathfield control that specifies the AEM DAM location to where digital assets are located. The number of Random Movies specifies the number of assets that is displayed. In this example, the value is four. The following illustration shows the output generated from this dialog field. 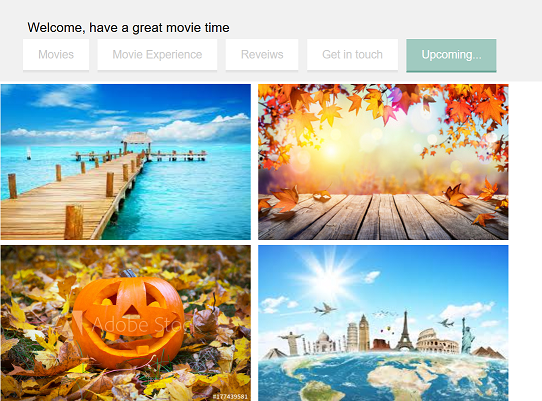 The Get in Touch dialog lets an author specify contact information, such as phone number. The following illustration shows this dialog tab. 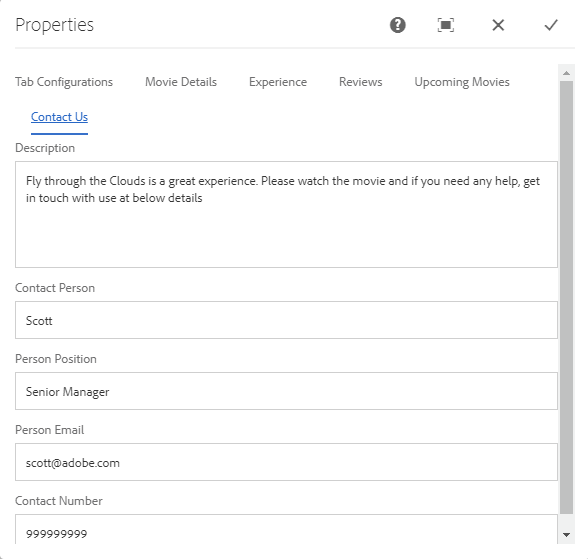 The following shows the output for this tab. 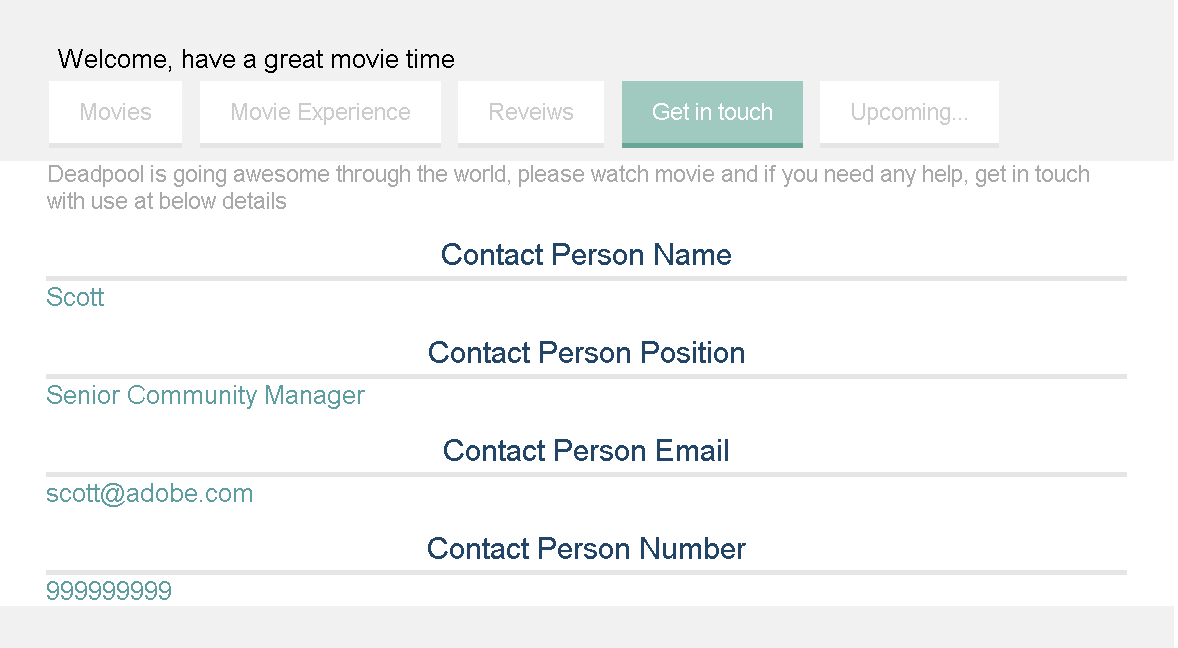 Install the AEM packages that are shown at the start of this community article. For information, see How to Work With Packages.

Once you install these packages, you can view the following project files. 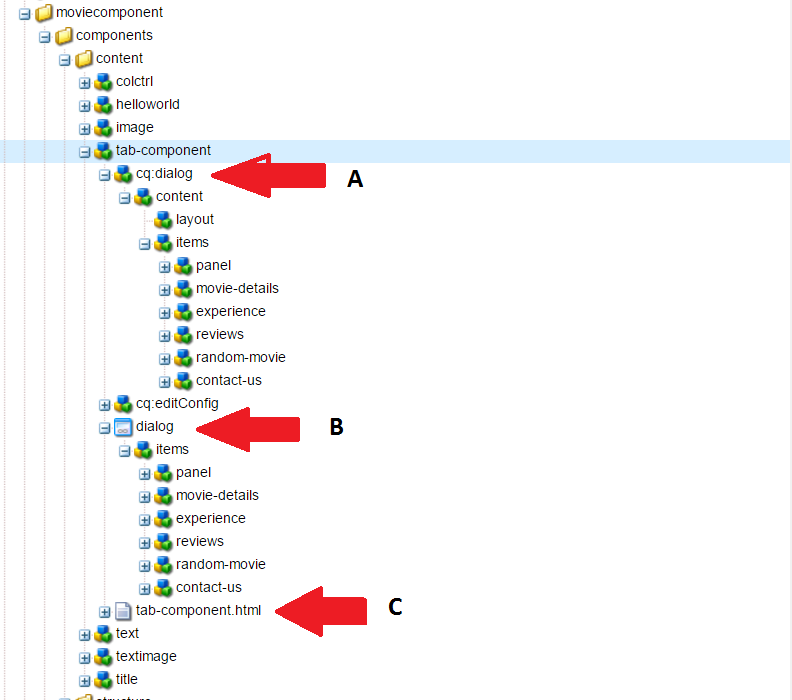 In addition, the package also installs AEM ClientLibs files in this location. 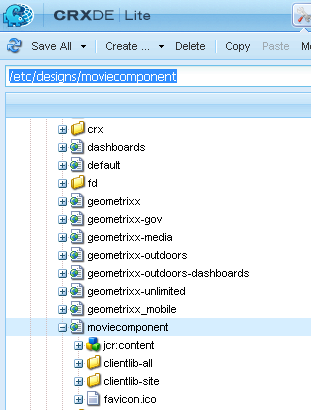 The movie-data.zip package contains digital assets used by the component. These assets are placed in this JCR location:

The package contains all of the files that are required to run the Movie component. The rest of this article explains the code, including how to build the OSGi bundle in case you want to change the logic.

Setup Maven in your development environment

You can use Maven to build an OSGi bundle that contains a Sling Servlet. Maven manages required JAR files that a Java project needs in its class path. Instead of searching the Internet trying to find and download third-party JAR files to include in your project’s class path, Maven manages these dependencies for you.

Set up a system environment variable to reference Maven. To test whether you properly setup Maven, enter the following Maven command into a command prompt:

This command provides Maven and Java install details and resembles the following message:

It is recommended that you use Maven 3.0.3 or greater. For more information about setting up Maven and the Home variable, see: Maven in 5 Minutes.

Next, copy the Maven configuration file named settings.xml from [install location]\apache-maven-3.0.4\conf\ to your user profile. For example, C:\Users\scottm\.m2\.

You have to configure your settings.xml file to use Adobe’s public repository. For information, see Adobe Public Maven Repository at http://repo.adobe.com/.

The following XML code represents a settings.xml file that you can use.

You can create an archetype project by using the Maven archetype plugin. In this example, assume that the working directory is C:\AdobeCQ.

To create an Experience Manager archetype project, perform these steps:

1. Open the command prompt and go to your working directory (for example, C:\AdobeCQ).

3. When prompted, specify the following information:

6. Change the working directory to aemMovie64 and then enter the following command.

After you run this command, you can import the project into Eclipse as discussed in the next section.

To make it easier to work with the Maven generated project, import it into the Eclipse development environment, as shown in the following illustration. 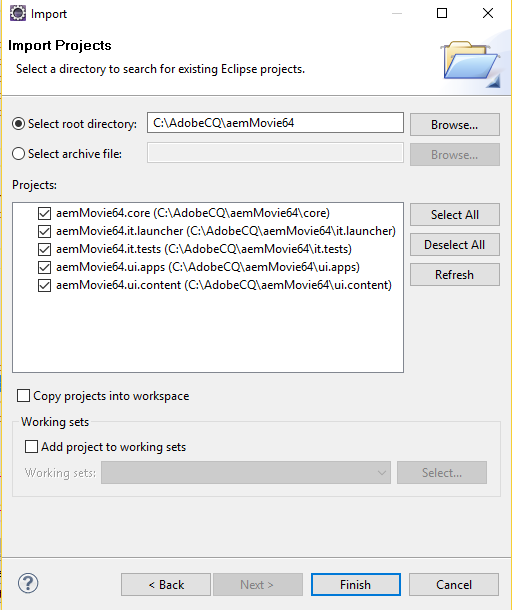 The Eclipse project that you work in to build the OSGi bundle that uses HTL API is aemMovie64.core. You do not have to work in the other projects under aemMovie64.

Do not worry about the errors reported in Eclipse. It does not read the POM file where the APIs are resolved. You build the bundle with Maven. Eclipse is used to edit the Java files and the POM file.

The next step is to add Java files to the com.moviecomponent.service.core package. Add these files:

The Constant class defines constants used by the service. One values is the path in the AEM DAM where the digital assets are stored. The following Java code represents class.

The following code represents the MovieInterface.

The MovieService extends com.adobe.cq.sightly.WCMUsePojo and represents the entry into the service. This class exposes the activate method that performs initialization task for the movie component. In this use case, the activate method creates an instance of the Movie interface:

This class also exposes a method named getFiles that returns an ArrayList instance that contains a list of path locations. Each value represents a path to a digial asset that is displayed in the Upcoming Movies tab of the HTL component. (See the illustration shown at the start of this article.)

The MovieQuery class implements MovieInterface and provides application logic for the getUpcomingMovies method. This method accepts two arguments that are defined the component's dialog:

The getUpcomingMovies method uses the AEM QueryBuilder API to retrieve a list of digital assets that are used in the HTL component. For information, see QueryBuilder API.

Add the following POM dependencies to the POM file located at C:\AdobeCQ\aemMovie64.

You need to modify two POM files. The first one is the parent POM file shown in this illustration.

Add the dependency shown above to the Parent POM file. Next, modify the POM file located at C:\AdobeCQ\slingModelExport\core. The following code represents this POM file.

To build the OSGi bundle by using Maven, perform these steps:

The command -PautoInstallPackage automatically deploys the OSGi bundle to AEM.

Notice the dialog node located at:

This node contain a child node named video of type granite/ui/components/coral/foundation/form/pathbrowser. This node is a pathbrowser that lets an author select the JCR path to where the video for the movie trailor is located. This pathbrowser is shown in the following illustration.

Notice how the value of the video nodes name property is used:

This is used in a video html element to render the video (the asset in the AEM DAM).

This is a benefit of a HTL component. You can use supported HTML5 tags such as the video element with AEM assets to build HTL components.

Notice the node located at:

This node has two child nodes:

These values are retrieved in the MovieService Java class and used in the QueryBuilder API operation.

To bind to a Java class that extends WCMUsePojo, you use a data-sly-use tag.

Notice that v is an instance of com.moviecomponent.service.core.MovieService.

In this example, v.files maps to the getFiles method in the MovieService class. This method returns an ArrayList, where each element is a path to the digital asset to display. This is how you iterate through a collection using HTL. Notice that each value is used within an img tag.

Most of the other nodes in the dialog are textfield values. The HTL component simply displays these values. For example, ${properties.contactPerson}.

The HTL code is located in this file:

The following illustration shows the output of this HTL code. 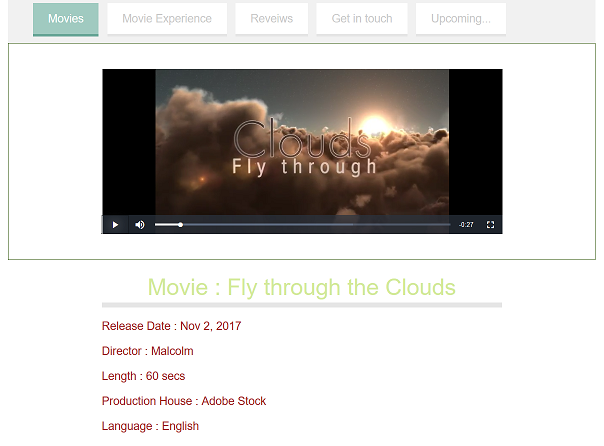 Values displayed in a HTL component

You can run the Movie component by going to the Touch UI view at:

as shown in this video. (Make sure that you install the package that is shown at the start of this article.)