You can develop a custom event handler for Adobe Experience Manager (AEM) that responds to events that occur at the JCR level. For example, you can write an event handler to respond to the following JCR events:

To create an AEM event handler, create an OSGi bundle that contains a class that implements javax.jcr.observation.EventListener. For information, see EventListener. 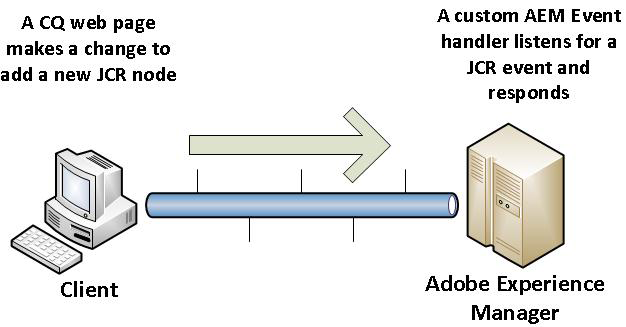 This development article guides you through creating an AEM event handler that responds to the 'Add Node' event that occurs when a node is added under content/claim. Application logic that represents an Event Hander is implemented as an OSGi bundle that is built using Declarative Services (DS) and Maven. DS is used to inject a ResourceResolverFactory instance into the service. The OSGi bundle is a managed component, which means that the OSGi service container creates the ResourceResolverFactory instance.

Setup Maven in your development environment

You can use Maven to build an OSGi bundle that contains a Sling Servlet. Maven manages required JAR files that a Java project needs in its class path. Instead of searching the Internet trying to find and download third-party JAR files to include in your project’s class path, Maven manages these dependencies for you.

Set up a system environment variable to reference Maven. To test whether you properly setup Maven, enter the following Maven command into a command prompt:

This command provides Maven and Java install details and resembles the following message:

It is recommended that you use Maven 3.0.3 or greater. For more information about setting up Maven and the Home variable, see: Maven in 5 Minutes.

Next, copy the Maven configuration file named settings.xml from [install location]\apache-maven-3.0.4\conf\ to your user profile. For example, C:\Users\scottm\.m2\.

You have to configure your settings.xml file to use Adobe’s public repository. For information, see Adobe Public Maven Repository at http://repo.adobe.com/.

The following XML code represents a settings.xml file that you can use.

You can create an Experience Manager archetype project by using the Maven archetype plugin. In this example, assume that the working directory is C:\AdobeCQ.

To create an Experience Manager archetype project, perform these steps:

1. Open the command prompt and go to your working directory (for example, C:\AdobeCQ).

5. Change the command prompt to the generated project. For example: C:\AdobeCQ\eventhandler.

7. After you run this command, you can import the project into Eclipse as discussed in the next section.

To make it easier to work with the Maven generated project, import it into the Eclipse development environment, as shown in the following illustration. 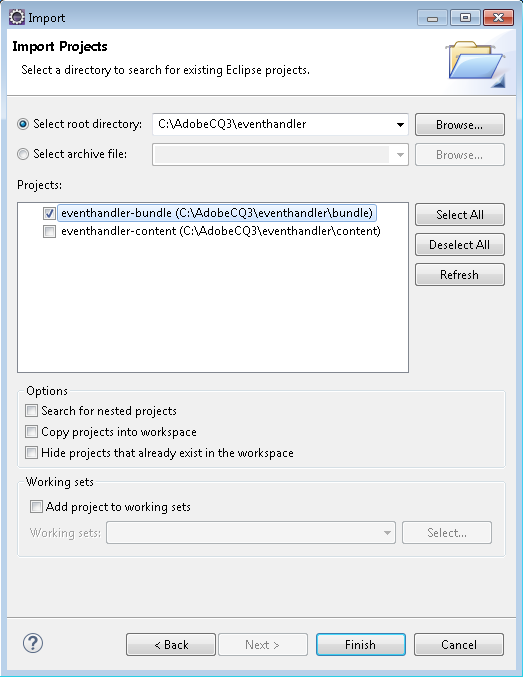 Notice that the ObservationManager object's addEventListener method is invoked.

//log the time when the event occurred
log.info("A new node was added to content/claim at : " +cal.getTime());
}

Modify the POM files to successfully build the OSGi bundle. In the POM file located at C:\AdobeCQ\eventhandler, add the following dependencies.

The following XML represents the POM file to build the custom event handler. Copy the XML code to your POM file.

Build the OSGi bundle by using Maven. When Maven builds the bundle, it also creates a  serviceComponents.xml file based on the annotations that are included in the com.adobe.aem.sc.HandleClaimSC class. The following XML represents this file.

There are a couple of points to note about this XML file. First, notice that the implementation class element specifies com.adobe.aem.events.SimpleDSComponent. The service element contains an interface attribute that specifies javax.jcr.observation.EventListener.

To build the AEM event handler by using Maven, perform these steps:

Deploy the bundle to Experience Manager

After you deploy the event handler, you can see it in the Experience Manager Apache Felix Web Console. 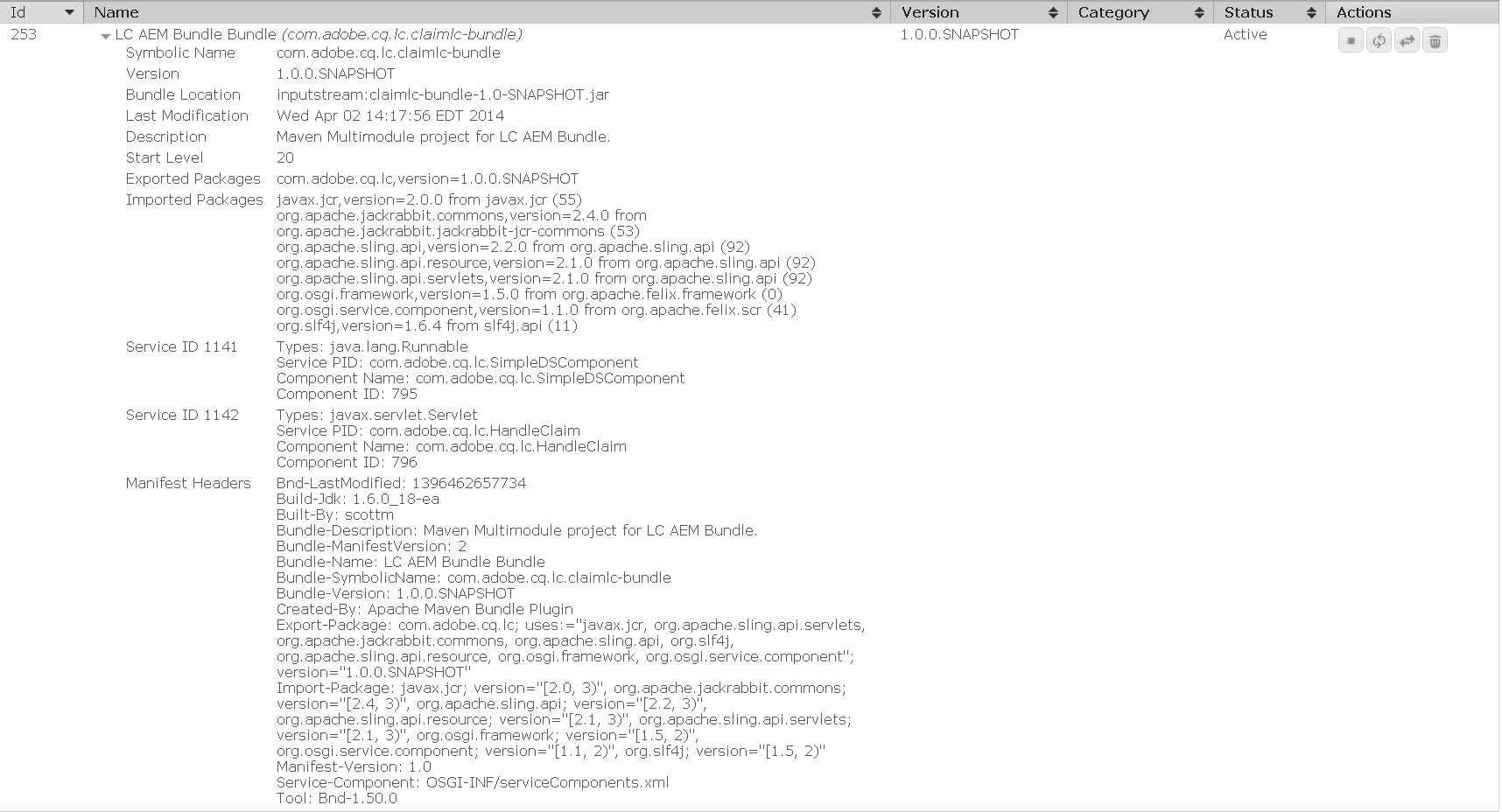 For testing purposes, you can use CRXDE Lite to add a node under content/claim. When you add a node of type nt:unstructured (and save the changes), the event handler logs a message in the AEM log file.  To learn how to write an AEM application that posts values to this path and trigger the event handler, see http://helpx.adobe.com/experience-manager/using/post_chars.html.

Deploy the AEM event handler by performing these steps:

You can view AEM events by using the Events view located at: http://localhost:4502/system/console/events.

The following illustration shows events generated when a node was added under /content/claims.