Portable Document Format (PDF) is actually a family of file formats, and this article details the ones that are most relevant for form developers. Many of the technical details and standards of different PDF types are evolving and changing. Some of these formats and specifications are International Organization for Standardization (ISO) standards, and some are specific intellectual property owned by Adobe.

This article shows you how to create various types of PDFs. It will help you understand how and why to use each one. All these types work best in the premier client tool for viewing and working with PDFs—Adobe Acrobat DC.

This is an example of a PDF/A file in Acrobat DC. 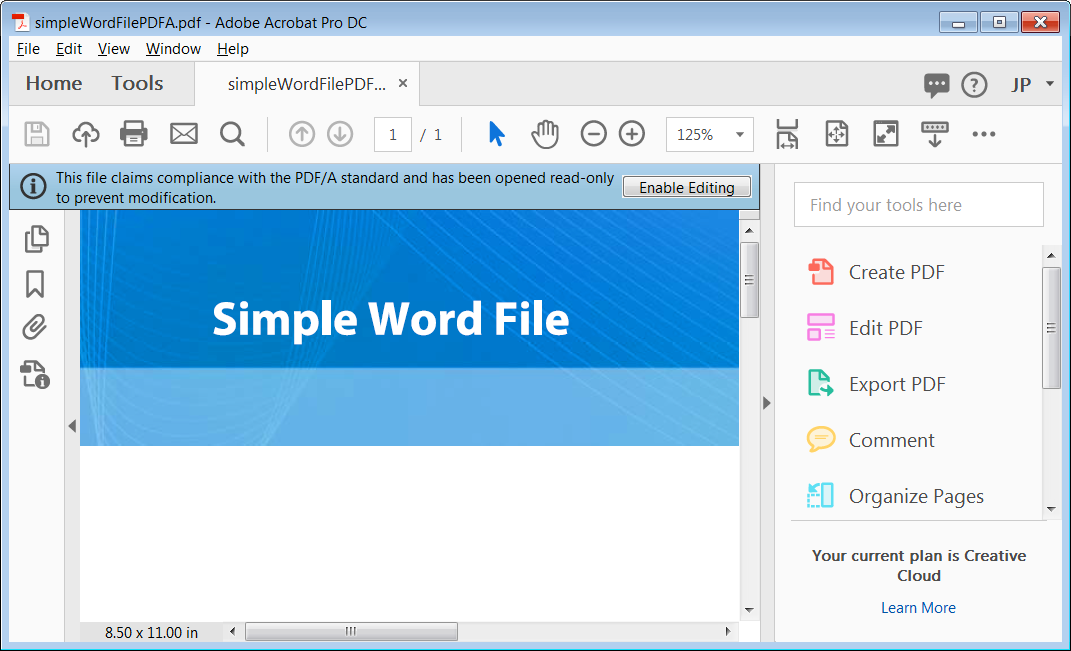 Note: The step-by-step instructions in this article were created with Adobe Acrobat DC. If you have a different version, the exact steps and screenshots may differ.

Adobe uses the term PDF form to refer to the interactive and dynamic forms you create with AEM Forms Designer. It’s important to note that there’s another type of PDF form, called an Acroform, that’s different from the PDF forms you create in AEM Forms Designer. The forms and files you create with Designer are based on Adobe’s XML Forms Architecture (XFA). In many ways, the XFA PDF file format is closer to an HTML file than it is to a traditional PDF file. For instance, the following code shows you what a simple text object looks like in an XFA PDF file.

As you can see, XFA forms are XML based. This well-structured and flexible format enables an AEM Forms Server to transform your Designer files into many different formats, including traditional PDF, PDF/A HTML. You can see the complete XML structure of your forms in Designer by selecting the XML Source tab of the Layout Editor. You can create both static and dynamic XFA forms in AEM Forms Designer.

You can create a static XFA PDF in Designer with the SmartDoc Expense Report form from your sample files. Follow these steps to create and view a static PDF form.

Dynamic XFA PDFs can change their layout at runtime, so the commenting and markup features aren’t
supported. However, dynamic XFA PDFs do offer the following advantages: In static forms (top), you can change only the background fill of your text field at runtime. Dynamic forms (bottom) enable you to change almost any property of your form at runtime.

Follow these steps to create and view a dynamic PDF form: 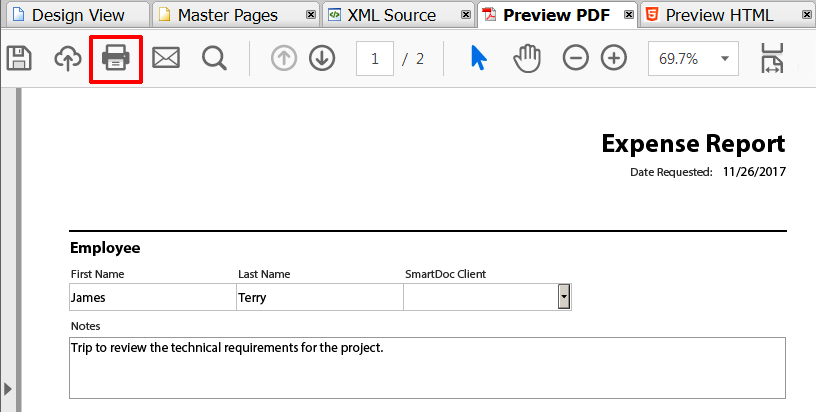 You have now created a traditional PDF file by capturing the print stream of your XFA PDF file. This new PDF file is static and read-only.

Since the source file for the SmartDoc Expense Report is a dynamic Designer file, the rendered files will grow or shrink based on the length of your data. You can repeat the steps above with the expenseDataLong.xml to create a much longer PDF file. This is an example of dynamic document generation.

Note: PDF Is an ISO Standard

In 2008, PDF became an official ISO standard document format. ISO is a worldwide federation of national standards organizations, and its goal is to work with member countries to develop and promote international standards. The American National Standards Institute (ANSI) represents the United States of America in ISO. There are approximately 100 other countries represented in ISO.

are Adobe’s older interactive form technology; they date back to Acrobat version 3. Adobe provides the Acrobat Forms API Reference (http://www.smartdoctech.com/pdf/FormsAPIReference.pdf), dated May 2003, to provide the technical details for this technology. are a combination of the
following items:

can be enhanced and expanded with AEM Forms Designer. However, even when you enhance an Acroform Designer, it’s still a traditional PDF under the hood, and there are limits to how interactive and dynamic you can make these forms. For instance, only some of the form fields in Designer’s Object Library are supported in Acroforms, and even the ones that work are only partially supported.

To move beyond the limits of Acroform technology, Adobe has invested in XFA to provide an XML form structure that’s both interactive and dynamic. If you’re moving from Acroforms to XFA PDFs, you need to know a couple of important facts about these two technologies:

PDF/A (PDF for Archives) builds on the document storage benefits of traditional PDFs with many specific details that enhance long-term archiving. The traditional PDF
file format offers many benefits for long-term document storage. The compact nature of PDF facilitates and conserves space, and its
well-structured nature enables powerful indexing and search capabilities. Traditional PDF has extensive support for metadata, and PDF has a long history
of supporting many different environments.

Like PDF, PDF/A is an ISO standard specification. It was developed by a task force that included AIIM (Association for Information and Image Management), NPES (National Printing Equipment Association), and the Administrative Office of the U.S. Courts. Since the goal of the PDF/A specification is to provide a long-term archive format, many PDF features are omitted so the files can be self-contained. The following are some key points about the specification that enhance the long-term reproducibility of the PDF/A file:

Two files in the sample files were created from the same Microsoft Word file. One was created as a traditional PDF and the other as a PDF/A file. Open these two files in Acrobat Professional:

Although the documents look the same, the PDF/A file opens with a blue bar across the top, indicating that you’re viewing this document in PDF/A mode. This blue bar is Acrobat’s document message bar, which you’ll see when you open certain types of PDF files.

The document message bar includes instructions, and possibly buttons, to help you complete a task. It’s color-coded, and you’ll see the blue color when you open special types of PDFs (like this PDF/A file) as well as certified and digitally signed PDFs. The bar changes to purple for PDF forms and to yellow when you’re participating in a PDF review.

Note: If you click Enable Editing, you will take this document out of PDF/A compliance.

This message bar indicates that your file conforms to the PDF/A specification. You can find more compliance with Acrobat’s Preflight tool. Follow these steps to see how it works: 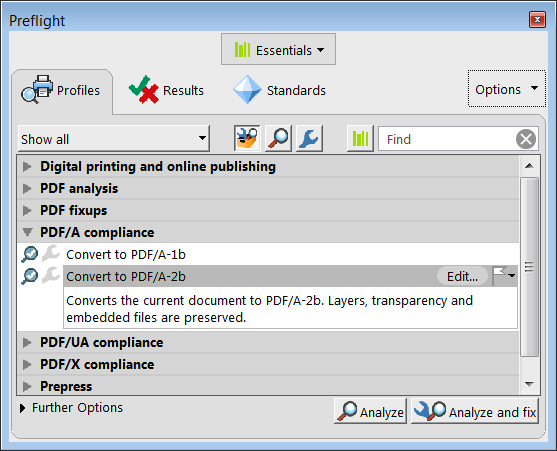 Acrobat will compare your file to the PDF/A-2b profile and provide the results of the analysis. 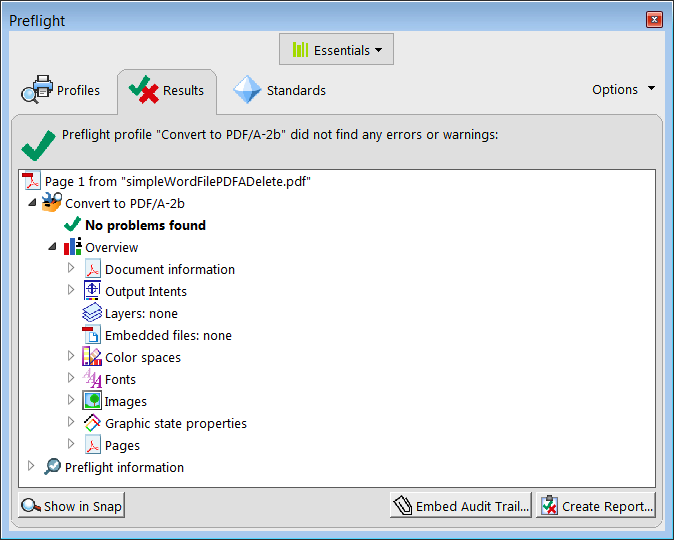 You can also request a report.

If you go back to the Profiles tab and compare your file against other PDF/A profiles, you’ll find that it doesn’t meet all requirements. You can also open simpleWordFile.pdf and see the issues that this file has. Experiment with the features of this tool. In many cases, you can use the Convert To PDF/A options to make your PDFs compliant with the various specifications. In some cases, you’ll need to go back to the source files of your PDFs and make changes in order to reach compliance. AEM Forms can automatically convert your AEM Forms Designer XFA-PDF files into PDF/A documents.