Welcome to the Flash Player and AIR 16 release notes!

In today's release, we've updated Flash Player with critical security and bug fixes.  We recommend all customers upgrade to this version.

Current Flash Player users that have enrolled in the "Allow Adobe to install updates (recommended)" update mechanism will be updated automatically over the next 24 hours.  No additional work is needed on your part.

Flash Player can always be downloaded and installed by simply visiting https://get.adobe.com/flashplayer

Customers using Google Chrome or Windows 8.x Internet Explorer will receive the update through the Google and Microsoft update mechanisms.

In today's scheduled release, we've updated Flash Player with new and improved functionality, important bug fixes and security updates.  We are currently hard at work adding iOS 64-bit support along with additional features to AIR and expect to release an updated beta shortly on labs.adobe.com.

We hope you enjoy this release.  If you encounter any problems please us know by posting issues to our public bug database.  For installation or usage help, please visit our community forums for assistance.

As many of you are aware, Apple has recently changed their iOS requirements to enforce 64-bit compatibility.  We're pleased to announce that the AIR 16 SDK can now be used to generate universal IPA binaries, which will run on both 32bit and 64bit iOS devices.  Going forward, every IPA generated using AIR SDK 16 and above will be a universal binary and there is no change required in the packaging commands for this support.

Please note that support for creating universal IPA binaries will only be available in the new compiler.  The legacy compiler is not (and will not be) compatible with iOS 64-bit.  Because of this, it will be removed with version 16 of the AIR SDK.  To ensure that Adobe as well as third party tools are able to work with this AIR SDK, the -useLegacyAOT option will continue to exist, but will be internally mapped to the new compiler.

With this change, any ANE that gets packaged in the application should contain the universal native libraries. Failing to do so will result in "Apple App Store allows only universal applications. is not a universal binary. Please change build settings in Xcode project to "Standard Architecture" to create universal library/framework" error while packaging the ipa.

To learn more about the improved packaging engine, please read Faster Compiling with AIR for iOS.

If you encounter packaging or runtime issues, please report them to us over at http://bugbase.adobe.com. Please provide detailed steps to reproduce along with sample projects. If you'd like to keep your code private, please feel free to email attachments along with your bug number to ccampbel@adobe.com.

To help designers and developers create robust and efficient 3D content, we've added Wireframe support into AIR desktop. This option can be changed by setting Context3D's setFillMode() to "wireframe" or "solid".

In version 14 of the Runtime we added the new Standard profile to desktop systems. This improvement in 3D graphics brought massive improvements to both Flash Player and AIR.  In Version 15 we expanded that to mobile devices in AIR.

While Standard profile reached a little over 20% of all iOS devices, the new Standard Constrained profile can now reach more than 85% of iOS devices!  Developers can access this new mode by using the new STANDARD_CONSTRAINED constant in Context3DProfile.  The chart below breaks down the differences between the different profiles that are currently available. 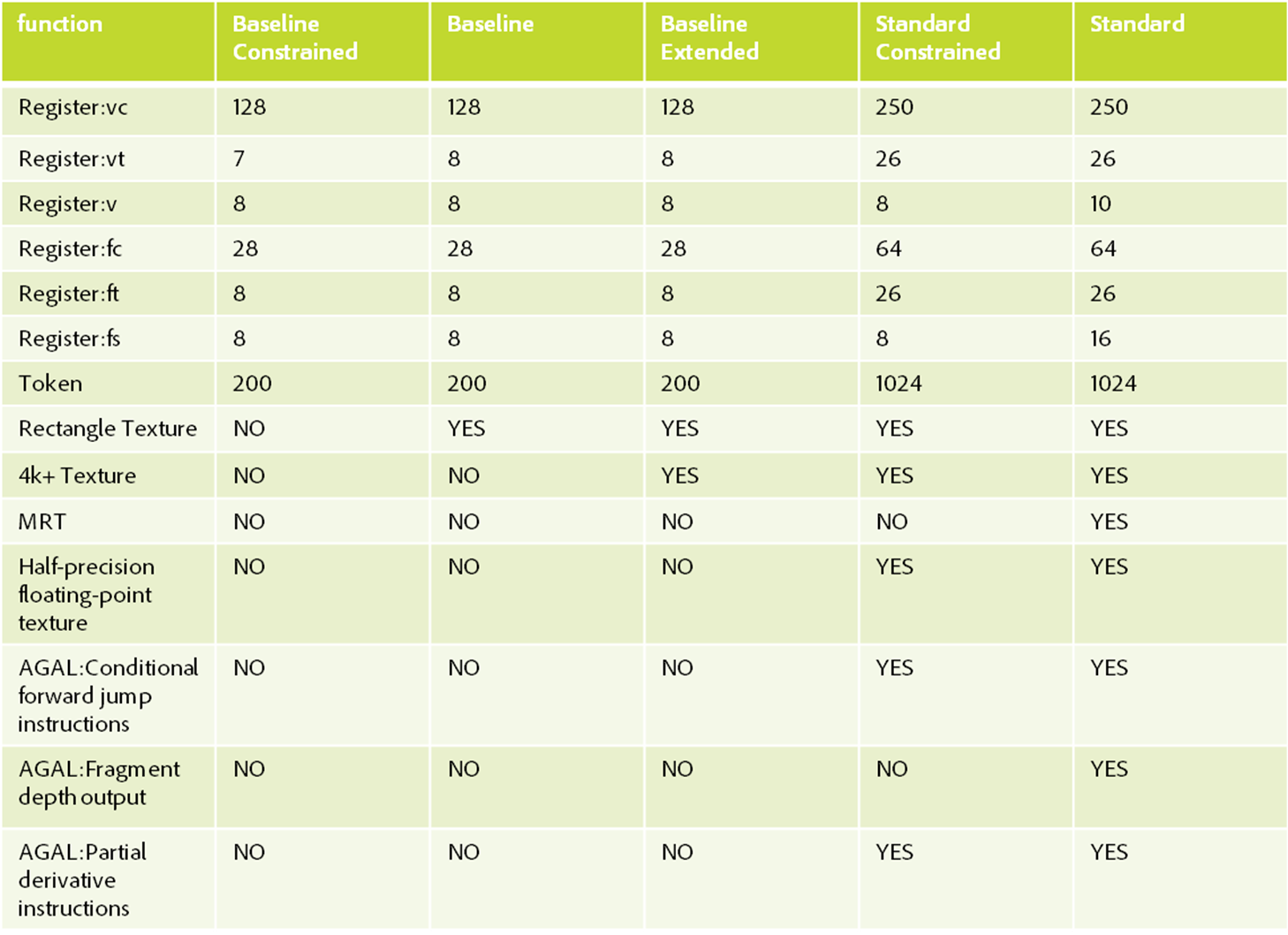 For a full list of features in Flash Player and AIR, including features introduced in previous releases, please review the document here

To use the new Flash Player, you will need to target SWF version 27 by passing "-swf-version=27" as an extra compiler argument to the ASC 2.0 compiler.  Detailed directions are below.

Authoring for AIR 16 Update to the AIR 16 namespace

Found a bug? Please submit a bug to the Flash Player and Adobe AIR bug database.

Flash Player and AIR may leverage your graphics hardware to decode and play H.264 video. There may be video issues that can only be reproduced with your particular graphics hardware and driver. When reporting an issue involving video, it is essential to note your graphics hardware and driver, along with your operating system and browser (when using Flash Player), so that we can reproduce and investigate issues. Please be sure to include this information as described in Instructions for Reporting Video Playback Issues. Note: Due to the high volume of email we receive, we are unable to respond to every request.

Thank you for using Adobe® Flash Player® and AIR® and for taking the time to send us your feedback!