Create dynamic, visually stunning motion graphics and visual effects wherever inspiration strikes. After Effects connects with Creative Cloud mobile and desktop apps seamlessly, allowing your creativity to inspire you — wherever you are.

This release of After Effects gives you the capability to search from over 40 million high-quality, curated, royalty-free images, illustrations, vector graphics, and videos in Adobe Stock, add them to your libraries, and purchase licenses for the assets directly in the Libraries panel.

You can drag graphics and video assets from the Libraries panel directly to the Composition and Timeline panels to import them into your project. You no longer have to import and add to the composition as separate steps.

When you add an Adobe Stock video to your After Effects project, the video initially appears as a placeholder (color bars) while the video file is downloaded. Once the download completes, the placeholder is replaced with the video file. You can monitor download progress in the new Progress Panel (Window > Progress Panel). When you license a preview video that was used in your project, the licensed video must be downloaded before the preview video is replaced.

You can apply the Lumetri Color effect to any layer in After Effects.

The November 2015 release of Adobe After Effects CC includes the Preview 3 of Character Animator, the character animation application that allows you to bring expressive characters to life using your own artwork.

Adobe Character Animator allows you to import artwork from Adobe Photoshop or Adobe Illustrator, and breathe life into them. You can do so by first capturing your performance using a camera and microphone. While you're performing, Character Animator mimics your facial expressions, synchronizes mouth movements to your speech, and provides complete control over all aspects of a character’s movement.

Starting with this release, a new Start screen welcomes you when you launch After Effects or while you open a new project.

You can configure the Start screen to appear at startup or when you open a project using the following options in General Preferences (choose Edit > Preferences > General):

Note: The new Start screen is currently available only in English, French, German, and Japanese.

Now you can access custom or default workspaces from the new workspace bar located on the right-hand side of the Tools panel with a single click. By default, the workspace bar displays three workspaces:

The remaining workspaces are available in the workspace bar's overflow menu.

You can customize the width of the bar by dragging the vertical divider between the tool and the workspace bars.

This release of After Effects introduces an improved caching behavior, which replaces the earlier Preview Favors controls.

After Effects renders and caches frames until the cache is full, after which the caching stops. After Effects no longer has an option to cache where preview continues indefinitely by discarding the oldest cached frames.

After Effects provides you a new Cache Before Playback option in this release. If you enable the option, After Effects caches frames before starting playback. This behavior is similar to how RAM Preview behaved in the earlier versions of After Effects. However, frames are not displayed to the Composition, Layer, or Footage panel as they are cached. 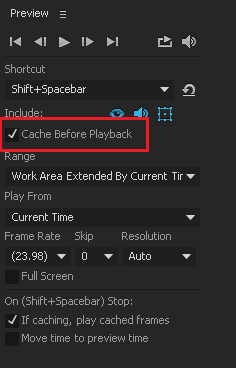 This release of After Effects introduces new ICC profiles to correctly interpret colors from a variety of sources, including ARRIRAW footage. In addition, there are new profiles to simulate color output and to choose a working color space for a project.

The following is a list of new ICC profiles in After Effects:

You can use multi-touch gestures (for example, zoom and pan) in the following panels:

Use the gestures in any touch-enabled device (for example, Microsoft Surface or Wacom Cintiq Touch) or multi-touch trackpad.

Stacked panel groups enable a single-click access to panels while keeping your workspace clean and uncluttered. The feature is similar to the panels in Adobe Lightroom.

In a stacked panel group, panels are minimized to their tabs and are stacked vertically. If you click a panel tab, the panel expands. 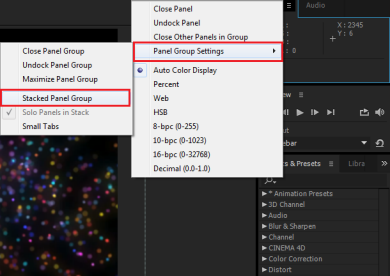 Importers for additional formats and codecs

After Effects CC 2015 can natively import the following:

You can read the baseline X,Y locations for a text layer using scripts. The newsourceText.value.baselineLocs attribute for TextDocument objects returns an array of floats. The attribute  indicates the origin of each line of the text's baseline X and Y values.

Line wraps in a paragraph text box are treated as multiple lines.

generateRandomNumber() avoids a problem where Math.random() does not return random values due to a concurrency issue with multiple CPU threads.

In previous versions of After Effects, the behaviors that occur when you stopped a preview were dependent on the type of caching used by the preview and the keyboard shortcut to stop the preview.

You can now configure the stop behaviors for a shortcut using the new controls at the bottom of the Preview panel.

In the On (Keyboard Shortcut Name) Stop section (for example, On (Spacebar) Stop), you can enable the following options: 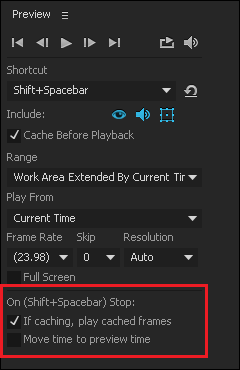 The Mute Audio button at the top of the Preview panel now does not control whether audio is played when you start a preview with the current shortcut. This button mutes or unmutes an audio during playback.

Note: If you change the state of the Mute Audio button during a preview, it will also enable or disable theInclude Audio button for the shortcut you used to start that preview.

There are three new buttons that control if any keyboard shortcut starts an audio or video preview, or shows overlays and layer controls. 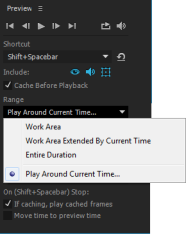 CC Vignette: You can now add or remove a vignette. CC Vignette includes an option to preserve (pin) highlights for more realistic behavior.

CC HexTile: CC Hextile generates honeycomb patterns. It repeats a hexagonal pattern, with several options that include a "smear" control. It can be considered as an extension to the CC Kaleida effect to generate dynamic effects in backgrounds.

The Color Finesse 3.0.14 plug-in for After Effects CC includes some bug fixes.

The inclusion of Creative Cloud Libraries in After Effects CC 2015 puts all your creative assets right at your finger tips. All your favorite assets can now be accessed from within the Libraries panel in After Effects.

You can save, access, and reuse assets stored in Creative Cloud Libraries across Adobe's desktop (such as Photoshop, Illustrator, and more) and mobile apps (such as Adobe Hue CC).

Library sharing makes it easy to collaborate with teams and maintain consistency across projects with common assets like graphics, colors, Looks, or type styles.

Select Window > Libraries to open the Libraries panel in After Effects.

You can also choose assets from the Creative Cloud Market.

Adobe Stock is a new service that sells millions of high-quality, royalty-free photos, illustrations, and graphics.

You can search for Adobe Stock content directly from within After Effects, using the Libraries panel (Window > Libraries) by clicking the Search Adobe Stock button in the panel. You can then purchase a license for an asset you want to use and include it in your After Effects Library. Or, you can add an unlicensed preview (watermarked) copy to your Library and purchase a license for it later.

You can now make changes to a project while previewing within After Effects. View design iterations, adjust properties, and even resize panels without stopping playback of your compositions.

In previous versions of After Effects, after you started a preview in a composition, layer, or footage viewer, clicking anywhere in the user interface would stop preview. Previews will now continue, until you stop the preview manually.

For more information, see Previewing in After Effects.

You can now customize Preview behaviors using the updated Preview panel. If you're new to After Effects, you will find the default Preview, started by pressing Spacebar, intuitive with real-time playback of audio and cached frames. For you, the experienced After Effects user, Preview options are configurable to suit your working style.

Note that the these new changes have dissolved the differences between the old RAM preview and Standard preview (spacebar) behaviors, and After Effects no longer uses those terms. Preview is now considered to be unified, with user-configurable behaviors.

New controls in the Preview panel allow you to configure preview behaviors for each keyboard shortcut: audio, looping, caching, range, and layer controls.

For more information, see Previewing in After Effects.

After Effects CC 2015 now includes face tracking capabilities. You can detect and track human faces with exceptional accuracy by managing the level of detail you track.

Simple mask tracking lets you quickly apply effects only to a face, such as selective color correction or blurring a person’s face, and more. However, with Face Tracking, you can also track specific points on the face such as pupils, mouth, and nose, allowing you to isolate and work on these facial features with greater detail. For example, change colors of the eyes or exaggerate mouth movements without frame-by-frame adjustments.

Face Tracking also lets you extract and copy facial measurements. Tracking of facial measurements tells you details such as how open the mouth is and how open each eye is. You can also export detailed tracking data to Adobe Character Animator for performance-based character animation.

For more information, see Face Tracking in After Effects.

Adobe Character Animator (Preview), a companion application, tracks your facial movements, records a voice over, and even triggers bodily movement with simple keyboard actions and automated features that give life to characters you create in Illustrator or Photoshop. When you talk, your character talks. When you feign surprise, so does your character. When you’re grumpy, your character is too.

Adobe Character Animator is for two different types of artists: those who want to rig complex characters without creating a confusing tangle of expressions, and those who just want to create simple characters easily. Either way, once the character is set up in Photoshop or Illustrator, Adobe Character Animator brings it to life. It does this by users acting out a performance in front of their webcam and talking into their microphone.

There are significant architectural code changes in After Effects CC 2015 release that allow the user interface and image rendering to be processed separately by the CPU. The following improvements are a direct result of these changes:

Evaluation of expressions in After Effects has been significantly enhanced. Overall, you may find that expressions are evaluated faster; the improvement will vary depending on the expression.

When an expression fails to evaluate, there are two major changes:

On the right side of the expression error warning banner are Left, Down, and Right arrow buttons:

Icons for compositions and image sequences in the Project and Timeline panels are now multicolored instead of monochrome.

In Preferences > Appearance there is a new Highlight Colors section wherein you can in which you can adjust the brightness of interactive controls and focus indicators.

You can see the changes to the slider values reflected live in the user interface behind the Preferences dialog.

Several changes have been made to how panel groups work

Cineware 2.0.16 for After Effects includes the following enhancements:

Removal of Memory and Multiprocessing preference

The Composition > Cache Work Area In Background command was dependent on the Multiprocessing feature. This functionality has been removed.