Learn how to update your Creative Cloud apps to the latest version, check for available updates, and more.

The auto-update feature of the Creative Cloud desktop app helps to update your apps automatically as soon as new versions are released.

Note: If you're installing the Creative Cloud desktop app for the first time, your apps are set to update automatically by default.

Once you enable the Auto-update feature, you get the option to retain or remove a specific version of any app.

Following are some reasons why you can't enable auto-update for your apps:

There can be more reasons why auto-update may not be available. Learn more about some common scenarios.

If you don't want to automatically update your apps, you can update them manually with the help of the Creative Cloud desktop app.

Can I schedule an update for later?

You cannot update an app if it's already open. If an app update is available and you're busy using the app, you can update it at a later time. Simply select Update later in the following screen. The Creative Cloud desktop app will attempt to update your app at a later time within 24 hours when the app isn't running. This process continues every 24 hours till the app is found to be closed and can be updated. 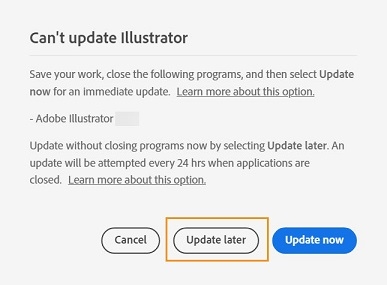 Update all your apps at once

If you want to update all your apps at once, select Update all in the upper-right of the Updates screen. Save your work and close all Adobe apps before you begin. If Adobe apps are open, you may receive a warning to close them. For more help, see Close conflicting processes or applications.

Note: We don't recommend using the Update all option if you want to retain the older version of the apps.

Check for the latest updates