The translation of UGC enables site visitors and members to experience a global community by removing language barriers.

As an example, suppose

When a translation service provider is associated with the site, each language copy of the site maintains its own threads of UGC posted through SCF components such as comments.

When a translation integration framework is configured in addition to the translation service provider, it is possible for each language copy of the site to share a single thread of UGC, thus providing global communication across language copies.  Instead of a discussion thread segregated by language, the configured global shared store enables the entire thread to be visible regardless from which language copy it is being viewed.  Further, multiple translation integration configurations can be configured specifying different global shared stores for a logical grouping of global participants, such as by regions.

AEM Communities ships with a trial license for a default translation service enabled for several languages.

When creating a community site, the default translation service is enabled when Allow Machine Translation is checked from the TRANSLATION sub-panel.

The default translation service is for demonstration only.

When a website has multiple language copies, the default translation service does not recognize that UGC entered on one site may be related to UGC entered on another, as when the UGC is, essentially, generated by the same component (the language copy of the page containing the component).

It is similar to groups of people discussing a topic unaware of comments being made in groups other than their own, as compared to eveyrone in one large group participating in one conversation.

If "one group conversation" is desired, it is possible to enable global translation across a website with multiple language copies, such that the entire thread is visible regardless from which language copy it is being viewed.

Any UGC which existed prior to global translation is no longer visible.

While the UGC is still in the common store, it is located under the language-specific UGC location, while new content, added after global translation was configured, is being retrieved from the global shared store location.

There is no migration tool for moving or merging language-specific content into the global shared store.

To create a new Translation Integration, which integrates a Translation Service connector with the web site, using the Touch-Optimized UI on the author instance  : 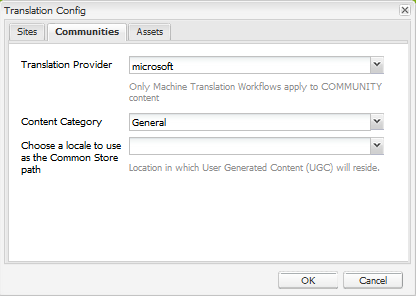 The new translation integration cloud service will need to be activated to the publish environment.  When associated with a web site, if not yet activated, the activation workflow will prompt to publish this cloud service configuration when the page with which it is associated is published.

When the site visitor is anonymous or has not specified a language preference in their profile, the preferred language is the base language of the page template.

All Communities Sites provide a user profile that signed in members can edit to identify themselves to the community and to set their preferences.

When pages are automatically translated into the user's preferred language, the UI for showing the original text and improving the translation are still made available. 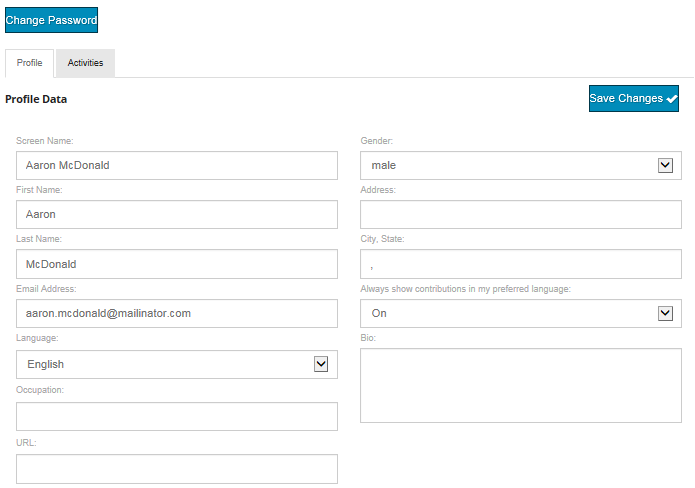 When a Community Site is created, the translation option can be enabled and configured.  The translation setting is in effect for content anonymous site visitors may view, but is overridden by the user's profile setting.