The Captivate Prime API is based on principles of REST, and exposes key elements of the Captivate Prime Object Model to application developers through HTTP. Before knowing the details of the API endpoints and the HTTP methods, developers can become familiar with the various Captivate Prime objects, their attributes and inter-relationships. Once the models are understood, it will be useful to get a basic understanding of the structure of API requests and responses, and a few common programming terms that we use generically across the API.

For details of the various API endpoints and methods, refer to the Captivate Prime API documentation.

When writing an application that makes API calls to Prime, you have to register your application using the Integration Admin app.

Captivate Prime APIs use OAuth 2.0 framework to authenticate and authorize your client applications.

1. Set up your application

You can set up your application with client id and client secret to use the proper end points. Once you register your application, you can get the clientId and clientSecret. Get URL should be used in browser as it authenticates the Captivate Prime users using their pre-configured accounts such as SSO, Adobe ID, and so on.

After successful authentication, your browser redirects to the redirect_uri mentioned in the above URL. A parameter code is appended along with the redirect uri.

2. Get refresh token from code

Some of the frequently used terms in Captivate Prime API are explained below for your reference.

Developers can access a single API object model and also multiple models associated with that model. To access the subsequent related models, you need to understand the relationship of each model with other models. Includes parameter enables developers to access the dependant models. You can use comma separator to access multiple models. For sample usage and more details on includes, refer to sample API model section in this page.

The API requests can be made by making a HTTP Request. Depending upon the end point and method developer may have a choice of various HTTP verbs such as GET, PUT, POST, DELETE, PATCH, etc. For some requests query parameters can be passed. When making a request for a specific data model, the user can also request for related models as described in the JSON API specifications. The structure of a typical API Request is described in sample model usage.

When an API request is made by a client, a SON document is obtained according to the JSON API specification. The response also contains the HTTP Status code, which the developer can verify to perform the appropriate next steps in his application logic. The structure of a typical API Response is described in sample model usage.

When an API request fails, an Error response is obtained. The HTTP Status code returned in the response indicates the nature of error. Error codes are represented with numbers for each model in the API reference. 200, 204, 400 and 404 are some of the common errors represented in APIs indicating HTTP access issues.

API object's attributes and its relationships are collectively called Fields. Refer to JSON API for more information. You can use Fields as a parameter while making API calls to fetch one or more speicific attributes from the model. In absence of the Fields parameter, the API call fetches all the available attributes from the model. For example, in the following API call, fields[skill]=name fetches you the name attribute of the skill model alone.

Sometimes, an API request results in a long list of objects to be returned in the response. In such cases, the pagination attribute enables the developer to fetch the results sequentially in terms of multiple pages, where each page contains a range of records. For example, pagination attribute in Captivate Prime enables you to set the maximum number of records to be displayed in a page. Also, you can define the range value of records to be displayed on page.

Let us consider a scenario where a developer wants to get skill name, max points assigned for skill level and points earned by the learner for that skill.

But, in this scenario, the developer wants to get the skill name, and points of skill level for the user. Captivate Prime API enables you to access this related information using relationship fields and include parameter. The associated models for userSkill are obtained in relatioships tag. You can get the details of each associated models by calling these models along with the userSkill. To get this information, use include parameter with dot (period) separated values for each of the associated models. You can use comma as separator to request another model like user include=skillLevel.skill,course

The Captivate Prime API allows developers to access Captivate Prime objects as RESTful resources. Each API endpoint represents a resource, typically an object instance like Badge, or a collection of such objects. The developers then use the HTTP verbs such as PUT, GET, POST and DELETE to perform the CRUD operations on those objects (collections).

The following diagram represents the various elements of the Captivate Prime Object Model in V1 API. 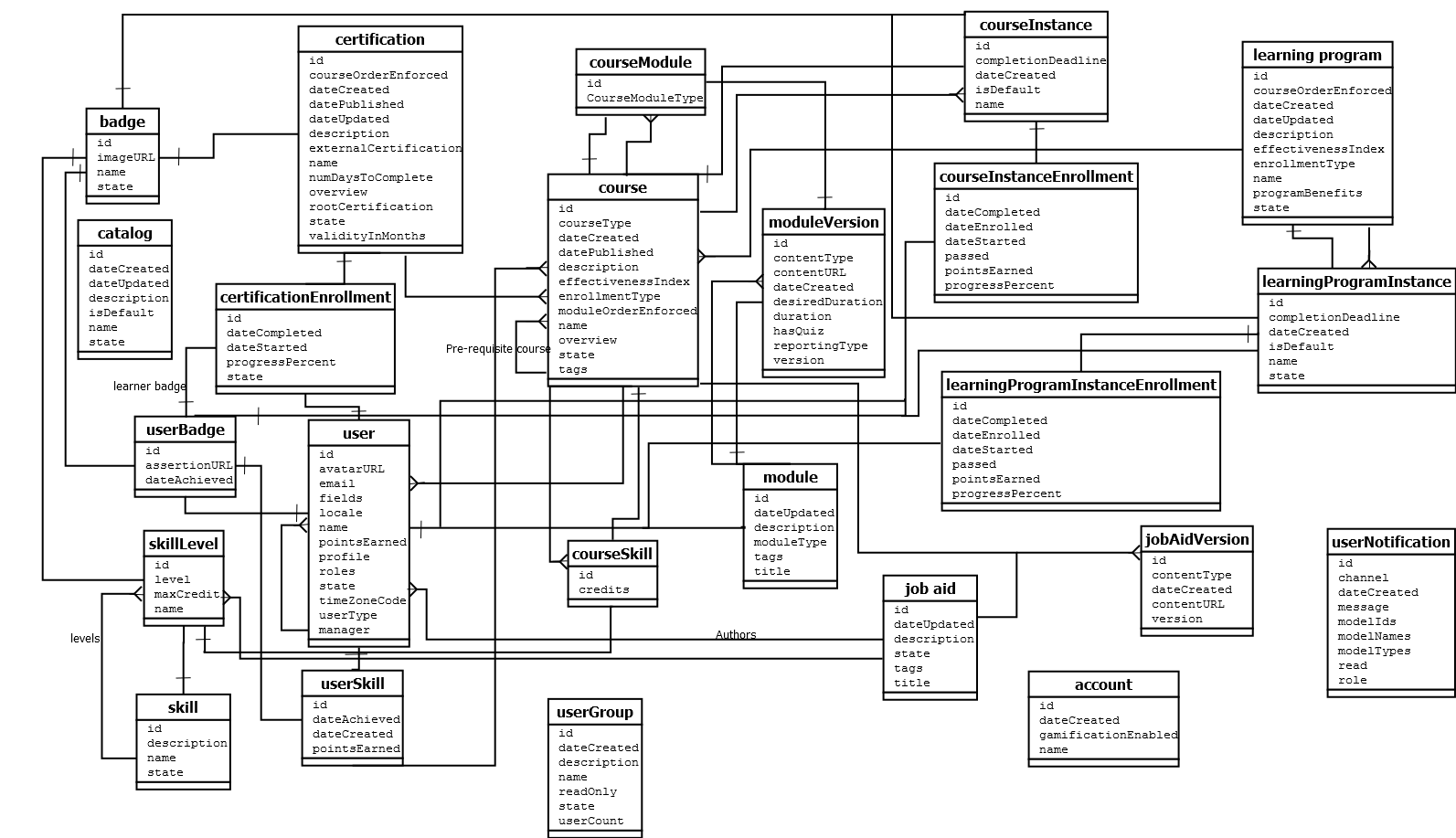 Following are the various elements of the Captivate Prime class diagram in V2 API. 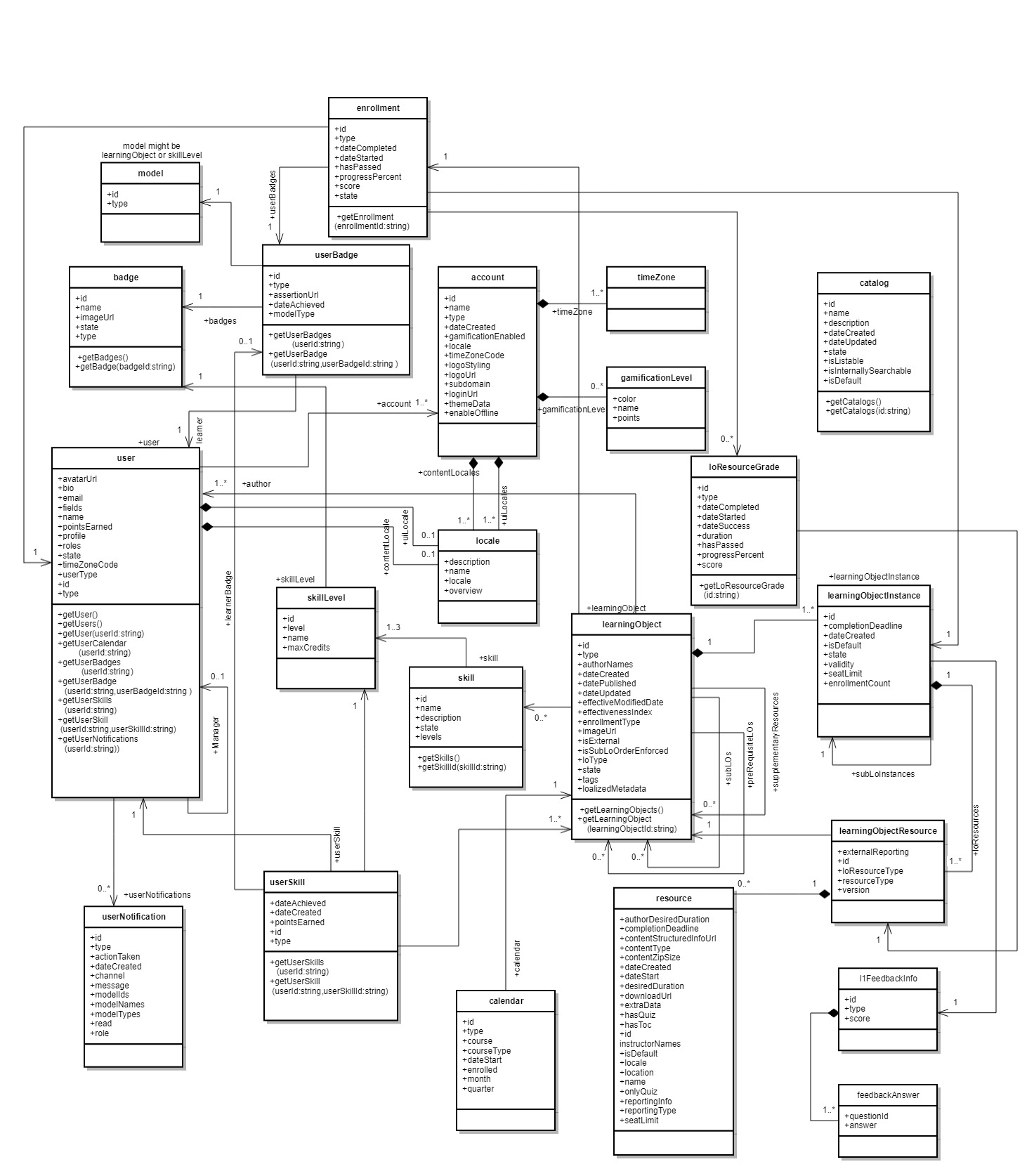 As a developer you have to create a trial account on Prime, so that you can have full access to all the roles within that account. To be able to write an application, a developer has to create some users and courses and get the account to a reasonable state so that the application being developed can have access to some sample data.

The Captivate Prime API can be used by developers to build any application. Developers have to ensure that their accounts consist of some valid users and courses. They can create a few dummy users and courses and simulate activity in the trial account, so that they can test functionality of the application.