Install and configure adaptive forms, PDF Forms, and HTML5 Forms. Configure Adobe Analytics and Adobe Target for adaptive forms to analyze usage of forms and target users based on their profile.

AEM Forms provides a set of forms to obtain data from end user: adaptive forms, HTML5 Forms, and PDF Forms. It also provides tools to list all the available forms on a webpage, analyze usage of forms, and target users based on their profile. These capabilities are included in AEM Forms add-on package. The add-on package is deployed on an Author or Publish instance of AEM.

Adaptive forms: These forms change appearance based on the screen size of the device, are engaging, and interactive in nature. Adaptive Forms can also integrate with Adobe Analytics, Adobe Sign, and Adobe Target. It enabled you to deliver personalized forms and process-oriented experiences to users based on their demography and other features. You can also integrate adaptive forms with Adobe Sign.

PDF Forms are suitable for pixel-perfect printing and digital information capture within a PDF document. In the digital avatar, you can use Adobe Acrobat or Acrobat Reader to fill these forms. You can host these forms on your website or use the forms portal to list these forms on an AEM site. You can also email these forms to others as attachments. These forms are best suited for desktop environments.

AEM Forms is a powerful enterprise-class platform and the data capture (adaptive forms, PDF Forms, and HTML5 Forms) is only one of the capability of AEM Forms. For the complete list of capabilities, see Introduction to AEM Forms. 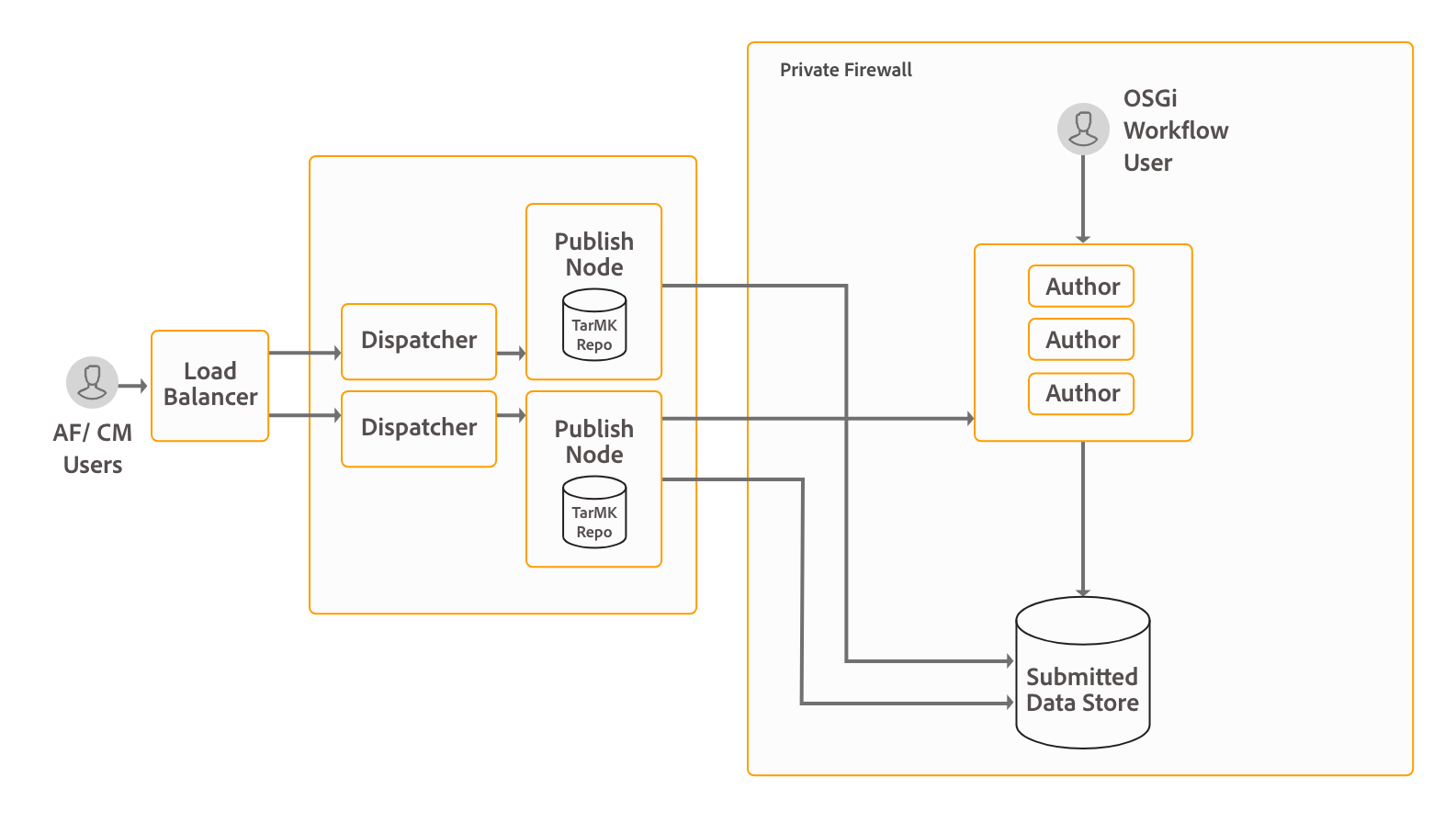 Before you begin to install and configure data capture capability AEM Forms, ensure that:

AEM Forms add-on package is an application deployed onto AEM. The package contains AEM Forms data capture and other capabilities. Perform the following steps to install the add-on package:

Perform the following steps on all the Author and Publish instances to boot delegate the libraries:

Perform the following steps on all the Author and Publish instances to whitelist the package:

Dispatcher is caching and load balancing tool for AEM. AEM Dispatcher also helps to protect AEM server from attacks. You can increase the security of your AEM instance by using the Dispatcher in conjunction with an enterprise-class web server.  If you use Dispatcher, then perform the following configurations for AEM Forms:

Caching is a mechanism to shorten data access times, reduce latency, and improve input/output (I/O) speeds. Adaptive forms cache stores only HTML content and JSON structure of an adaptive form without saving any pre-filled data. It helps in reducing the time required to render an adaptive form.

Perform the following steps to configure the adaptive forms cache:

AEM Forms integrates with Adobe Analytics that allows you to capture and track performance metrics for your published forms and documents. The objective behind analyzing these metrics is to make informed decisions based on data about the changes required to make forms or document more usable.

To use Adobe Analytics with AEM Forms, see Configuring analytics and reports.

Your customers are likely to abandon a form if the experience it delivers is not engaging. While it is frustrating for the customers, it can also upturn the support volume and cost for your organization. It is critical as well as challenging to identify and provide the right customer experience that increases the conversion rate. AEM forms holds the key to this problem.

You have configured an environment to use AEM Forms data capture capabilities. Now, the next steps towards using the capability are: