Handling large files and running workflows in Adobe Experience Manager (AEM) Assets can consume considerable CPU, memory, and I/O resources. In particular, the size of assets, workflows, number of users, and frequency of asset ingestion can affect the overall system performance. The most resource-intensive operations include AEM asset ingestion and replication workflows. Intensive use of these workflows on a single AEM authoring instance can adversely impact authoring efficiency. 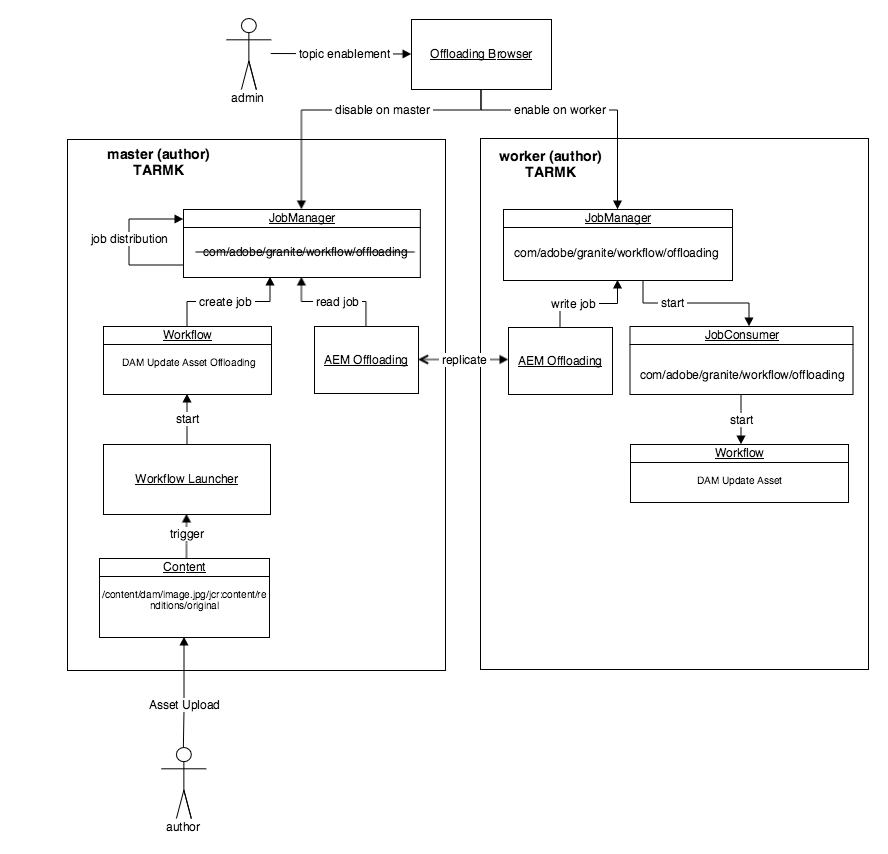 The job manager distributes new jobs to worker instances. When designing the distribution mechanism, it is important to take topic enablement into account. Jobs can only be assigned to instances where the job's topic is enabled. Disable the topic com/adobe/granite/workflow/offloading on the master, and enable it on the worker to ensure that the job is assigned to the worker.

The offloading framework identifies workflow offloading jobs assigned to worker instances and uses replication to physically transport them, including their payload (for example, images to be ingested), to workers.

Once a job is written on the worker, the job manager calls the job consumer responsible for the com/adobe/granite/workflow/offloading topic. The job consumer then runs the DAM Update Asset workflow on the asset.

Sling distributed jobs facilitate the distribution of jobs among a set of instances that are members of the topology. Sling jobs are based on the idea of capabilities. A job is defined by its job topic. To run a job, an instance must provide a job consumer for a specific job topic. The job topic is the main driver for the distribution mechanism.

In this context, the term distribution signifies assignment of a job to a specific instance that provides a job consumer. The assignment to an instance is stored in the repository. In other words, Sling distributed jobs can be assigned to any instance in the topology by default. However, other jobs can only be run by instances that share the same repository. This implies that these jobs can only be run by instances that are part of the same cluster. Jobs assigned to instances of a different cluster are not run.

The Granite offloading framework complements Sling job distribution to run jobs that are assigned to non-clustered instances. It does not perform any distribution (instance assignment). However, it identifies Sling jobs that were distributed to non-clustered instances, and transports them to the target instance for execution. Currently, offloading uses replication to perform this job transport. To run a job, offloading defines the input and the output, which are then combined with the job to build the job payload.

Sling distributed jobs provide the job and distribution framework. Granite offloading only takes care of the transport for the special case where jobs are distributed to non-clustered instances.

The offloading framework also comes with a user interface (UI) to visualize and control job topic enablement across the entire topology. The UI lets you conveniently configure the topic enablemenet of Sling distributed jobs. You can also set up offloading without the UI.

Every implementation is unique and, as such, there is no one-size-fits-all offloading configuration. The following sections provide guidance and best practises around asset ingestion offloading.

Asset offloading also imposes overheads on the system, including operation overheads. If you encounter issues with the asset ingestion load, Adobe recommends that you first improve the configuration without offloading. Consider the following options before moving to asset offloading:

If you conclude that Assets offloading is an appropriate approach for you, Adobe provides the following guidance:

With AEM and Oak, there are several deployment scenarios possible. For Assets offloading, a TarMK based deployment with a shared datastore is recommended. The following diagram outlines the recommended deployment: 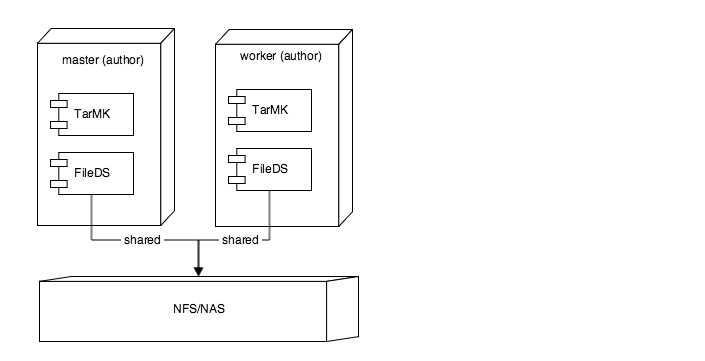 For details around configuring a datastore, see Configuring node stores and data stores in AEM.

If the workflow model is disabled from the job payload, ensure that you distribute changes to the referenced workflow model using other tools, such as package manager.

To disable the transport of the workflow model, modify the DAM Update Asset Offloading workflow.

This document focuses on Asset Offloading. Here is some additional documentation on offloading: