Premiere Pro has a vectorscope and waveform monitors (YC Waveform, YCbCr Parade, and RGB Parade) to help you output a video program that meets broadcast standards and make adjustments based on aesthetic considerations, such as color corrections.

A vectorscope measures the chrominance (color components) of a video signal, including hue and saturation. A vectorscope maps a video’s color information onto a circular chart.

You can view a vectorscope, YC waveform, YCbCr Parade, and an RGB Parade scope either individually or grouped in the Reference Monitor, Program Monitor, or Source Monitor. 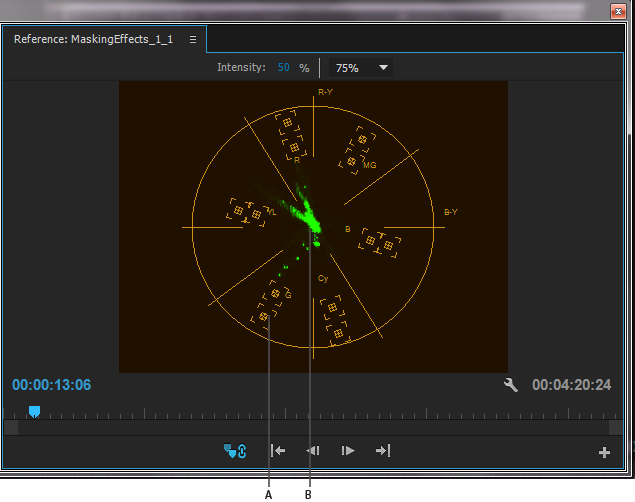 A. Target boxes B. Image profile

The Vectorscope has the following controls:

Adjusts the brightness of the pattern display. It does not affect the video output signal.

Default position. Use to check video input in which standard 75% intensity bars, like those in Premiere Pro, are used.

The YC Waveform displays luminance information as a green waveform. Bright objects produce a waveform pattern (bright green areas) near the top of the graph; darker objects produce a waveform toward the bottom. For NTSC video in the United States, luminance levels should range from 7.5 to 100 IRE (sometimes referred to as the legal broadcast limit). Japan’s implementation of NTSC standards permits a luminance range from 0 to 100 IRE. Generally, luminance and chroma values should be about the same and distributed evenly across the 7.5 to 100 IRE range. 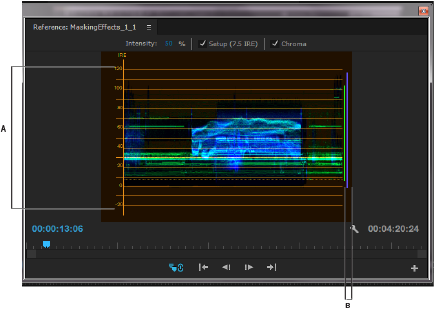 A. IRE units B. Range of signal components

The YC Waveform has the following controls:

Adjusts the brightness of the waveform display. It does not affect the video output signal.

Displays both chrominance in addition to luminance information. Deselecting this option displays only the luminance.

The YCbCr Parade scope displays waveforms representing levels of the luminance and color difference channels in the video signal. The waveforms appear in a graph one after another.

The Intensity control adjusts the brightness of the waveforms. It does not affect the video output signal.

Cb and Cr are the color difference channels in a digital video signal. Cb is blue minus luma and Cr is red minus luma. Y represents luma. 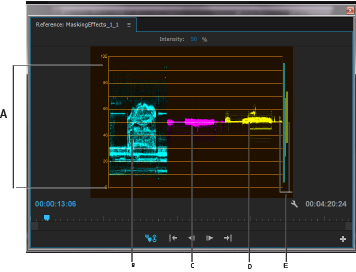 The RGB Parade scope displays waveforms representing the levels of the red, green, and blue channels in a clip. The waveforms appear in a graph one after another, in parade fashion. This scope is useful for viewing the distribution of the color components in a clip. The levels of each color channel are measured proportionately to each other using a scale of 0 to 100.

The Intensity control adjusts the brightness of the waveforms. It doesn’t affect the video output signal. 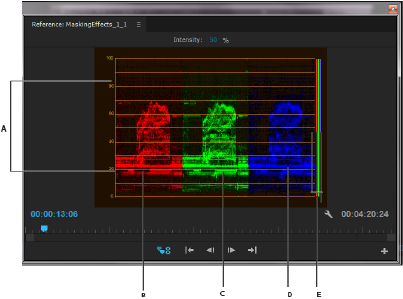