Your performance of a scene’s puppets can be captured during recording. Each recording of a specific armed behavior parameter for a puppet is called a take.

A scene’s timeline (shown in the Timeline panel) represents each puppet instance as a selectable track item. When selected, the Properties panel shows the behaviors for the source (master definition) of the puppet, plus any overridden behavior parameter values for this specific instance. For example, the same puppet can be added multiple times to a scene, with each puppet’s track item having a different Position transform for placement within the scene.

A scene has three modes:

The Go to Start button moves the current time back to the start of the scene (if stopped) or the start of playback (if in Play). The Go to Previous Frame and Go to Next Frame buttons move one frame backward or forward in time (when stopped).

Your audio input and output hardware must share sample rate.

To select a camera, choose it from the panel menu in the Camera & Microphone panel. The available camera sources are listed by name.

If no compatible camera is available, the panel menu will show No Camera Detected. If there are issues with the camera input, the panel will show one of the following errors:

If the Camera Input button gets disabled due to an issue, clicking (enabling) it will attempt to reacquire video from the selected camera.

The accuracy of face tracking is affected by the quality of the image captured by the webcam. To enhance the image quality, enable automatic camera adjustment based on real-time analysis of lighting conditions, as follows:

This lighting adjustment is not used in Characterizer or on macOS.

The movement of your head to control a puppet’s face, the dragging of a character’s hand to make it wave, and other actions to capture a performance is done by recording a take. You can perform these tasks in the Record workspace.

A 3-second countdown starts by default before recording starts. Use this time to prepare for recording or capture of a specific pose for your puppet. To enable or disable countdown, follow this step: 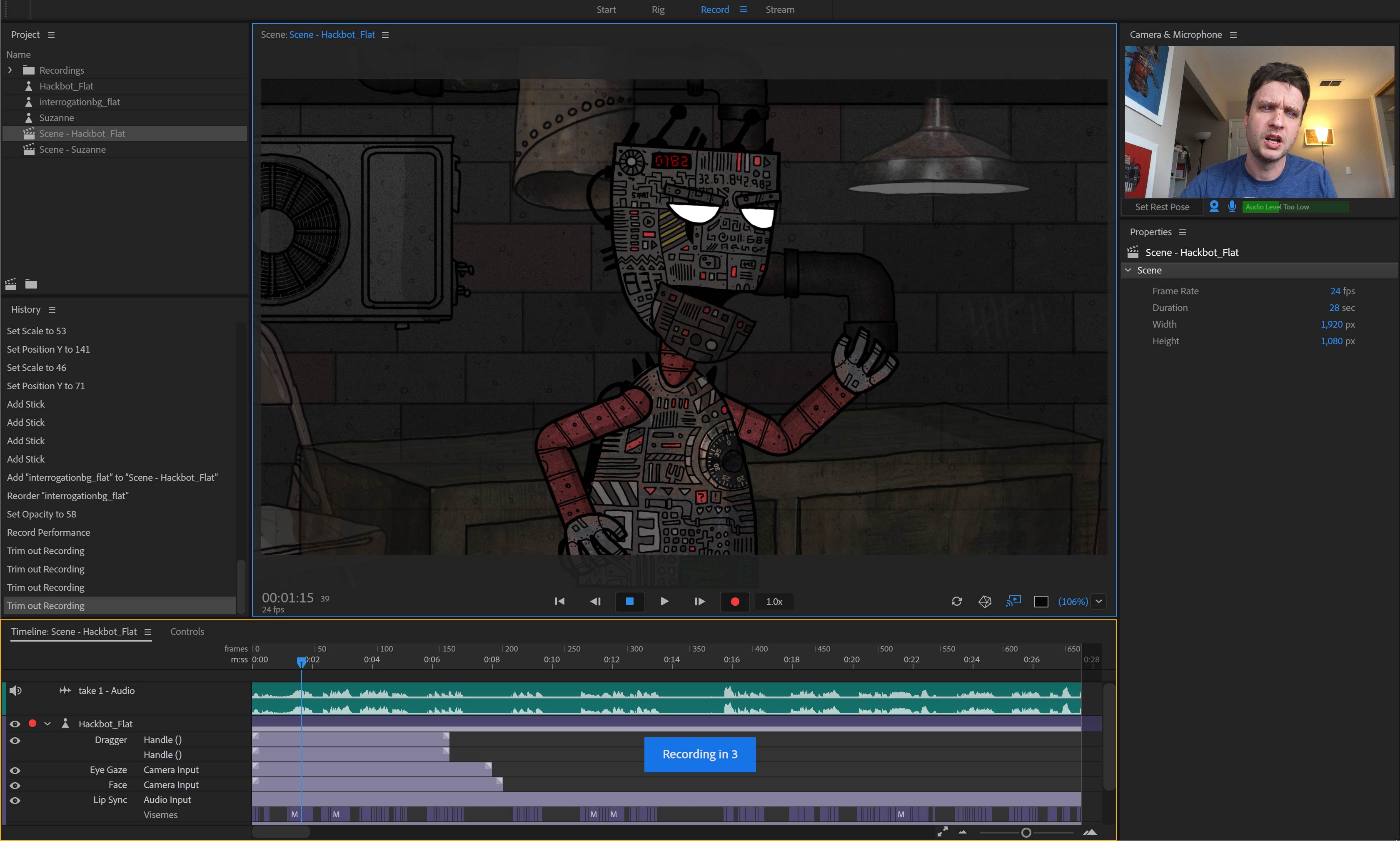 The recorded take is saved to a Recordings folder on disk (in the Ch Media subfolder of the current project folder). The take is also imported into the Project panel in the Recordings folder and added into the scene. If microphone input was recorded, the WAV file for it appears as an audio track item.

The puppet’s track is collapsed by default. A lighter-colored take summary bar indicating the presence of recorded takes appears along the bottom of the puppet track item’s bar.

macOS only- to automatically switch to changes in the OS audio device settings, choose System Default in the Audio Hardware preferences. This can be configured separately for input and output devices.

To select a camera, choose it from the panel menu in the Camera & Microphone panel. The available camera sources are listed by name.

If the Camera Input button gets disabled due to an issue, clicking (enabling) it will attempt to reacquire video from the selected camera.

When a puppet track is selected in the timeline, each behavior in the Properties panel includes a menu button with the following commands:

Each puppet track has its own Arm for Record button that can be controlled separately from the puppet track being selected.

Arm for record a puppet track

Clicking puppet track items or track headers still switches arming to that puppet. Deselecting a puppet track by clicking away from it (for example, by editing a take or viseme bar on a different puppet track) does not disarm the previously armed puppet tracks.
You can arm multiple puppet tracks by Shift-clicking or Command/Ctrl-clicking the Arm for Record buttons for those tracks. To ensure that puppet tracks do not get disarmed, select only the takes or  on puppet tracks or audio tracks.

To capture the finer movements, you can record and perform at a speed slower than the frame rate of the scene.

To change the recording speed for a scene, do the following:

These scene settings will be used for the next scene created.

The Playback Speed setting allows you to review finer movements or changes in a performance by playing back the scene at a slower speed. You can use this control with the controllable recording speed.

To change the playback speed for a scene, open the scene in the Scene panel, and change the Playback Speed setting from the Playback and Recording Speed control. This option is present at the bottom of the panel.

When playback and recording speeds are different, both values are indicated, with recording speed in red. When they’re the same, only that value is shown.

Unlike other scene properties but like recording speed, new scenes always default to normal (1.0x) playback speed, instead of the last-used playback speed.

Play back a recorded performance

After recording takes, play back the recordings to check your work.

To start at a specific time in the scene

Click or drag along the time ruler (at the top of the Timeline panel). Dragging also scrubs audio in the scene.

To control playback speed for a scene

Open the scene in the Scene panel, then change the Playback Speed setting in the Playback and Recording Speed control at the bottom of the panel.

The playhead snaps to frame boundaries by default, and when zoomed in time in the Timeline panel you can see the duration of a frame shaded in a light blue (similar to the shading seen in After Effects and Photoshop).

The Scene panel shows the middle time within this frame duration, but audio can still play across the frame duration. Track and take operations, such as recording, split, and snapping, still happen at the red line (left edge).

To unsnap the playhead from frame boundaries for finer positioning or audio scrubbing, hold down Command (mac) or Ctrl (Windows) as you drag the playhead.

To scroll through time in a scene, you can use the following keyboard shortcuts.

In order to keep the  visible, the Timeline Panel’s content scrolls during playback or recording.

To prevent scrolling in time during playback and recording, follow this step:

Each audio track in a scene’s timeline has its own Volume setting. Fore more information, see Audio track volume control.

Step record to capture one- or two-frame takes

You can capture the current pose of a character, specifically the behavior parameters armed for record, as one- or two-frame takes to animate “on ones” or “on twos.” For example, if you have the Dragger behavior’s After Move parameter set to Hold in Place, you can pose a character’s arms, record a one-frame take, change the pose, record another one-frame take, and so on. Like any recorded take, you can extend its duration afterwards to, for example, hold a pose longer.

If you want to extend the pose of a character’s recorded performance (takes) at the current time, create hold takes. Hold takes the values of the selected takes at the , allowing you to extend them to the required duration and optionally blend them with the earlier recorded takes. To create hold takes, follow these steps:

Each selected take has a new, one-second hold take above it. You can lengthen and move hold takes as needed, and even blend them into the takes below them for smoother transitions. The tick marks along the bottom edge of each hold take indicate that the value is constant, extending both earlier and later in time.

Hold takes for Lip Sync or Trigger takes can be lengthened from either end, but the start of the viseme or trigger bar doesn’t extend automatically. You can still drag it manually as needed.

Replays let you trigger the recorded takes for a puppet, either live or for rerecording. Use it for making and replay easier and more efficient. For information about replays, see Replays: Reusable and triggerable recordings.