Think of a camera raw file as your photo negative. You can reprocess the file at any time, achieving the results that you want by making adjustments for white balance, tonal range, contrast, color saturation, and sharpening. When you adjust a camera raw image, the original camera raw data is preserved. Adjustments are stored as metadata in an accompanying sidecar file, in a database, or in the file itself (in the case of DNG format).

When you shoot JPEG files with your camera, the camera automatically processes the JPEG file to enhance and compress the image. You generally have little control over how this processing occurs. Shooting camera raw images with your camera gives you greater control than shooting JPEG images, because camera raw does not lock you into processing done by your camera. You can still edit JPEG and TIFF images in Camera Raw, but you will be editing pixels that were already processed by the camera. Camera raw files always contain the original, unprocessed pixels from the camera.

To shoot camera raw images, you must set your camera to save files in its own camera raw file format.

Digital cameras capture and store camera raw data with a linear tone response curve (gamma 1.0). Both film and the human eye have a nonlinear, logarithmic response to light (gamma greater than 2). An unprocessed camera raw image viewed as a grayscale image would seem very dark, because what appears twice as bright to the photosensor and computer seems less than twice as bright to the human eye.

For a list of supported cameras and for more information about Camera Raw, see Digital camera raw file support.

To see a list of cameras and which version of Camera Raw each camera requires, see Cameras supported by Camera Raw.

Camera Raw software is included as a plug-in with Adobe After Effects® and Adobe Photoshop, and also adds functionality to Adobe Bridge. Camera Raw gives each of these applications the ability to import and work with camera raw files. You can also use Camera Raw to work with JPEG and TIFF files.

Camera Raw supports images up to 65,000 pixels long or wide and up to 512 megapixels. Camera Raw converts CMYK images to RGB upon opening. For a list of supported cameras, see Digital camera raw file support.

Using Adobe Bridge, you can apply, copy, and clear image settings, and you can see previews and metadata for camera raw files without opening them in the Camera Raw dialog box. The preview in Adobe Bridge is a JPEG image generated using the current image settings; the preview is not the raw camera data itself, which would appear as a very dark grayscale image.

appears in the thumbnails and preview image in the Camera Raw dialog box while the preview is generated from the camera raw image.

After you process and edit a camera raw file using the Camera Raw plug-in, an icon

appears in the image thumbnail in Adobe Bridge.

As new versions of Camera Raw become available, you can update this software by installing a new version of the plug-in. You can check for updates to Adobe software by choosing Help > Updates.

If you have trouble opening Camera Raw files, see Why doesn't my version of Photoshop or Lightroom support my camera?

About the Digital Negative (DNG) format

The Digital Negative (DNG) format is a non-proprietary, publicly documented, and widely supported format for storing raw camera data. Hardware and software developers use DNG because it results in a flexible workflow for processing and archiving camera raw data. You may also use DNG as an intermediate format for storing images that were originally captured using a proprietary camera raw format.

Because DNG metadata is publicly documented, software readers such as Camera Raw do not need camera-specific knowledge to decode and process files created by a camera that supports DNG. If support for a proprietary format is discontinued, users may not be able to access images stored in that format, and the images may be lost forever. Because DNG is publicly documented, it is far more likely that raw images stored as DNG files will be readable by software in the distant future, making DNG a safer choice for archival storage.

Metadata for adjustments made to images stored as DNG files can be embedded in the DNG file itself instead of in a sidecar XMP file or in the Camera Raw database.

Copy camera raw files to your hard disk, organize them, and (optionally) convert them to DNG.

Before you do any work on the images that your camera raw files represent, transfer them from the camera’s memory card, organize them, give them useful names, and otherwise prepare them for use. Use the Get Photos From Camera command in Adobe Bridge to accomplish these tasks automatically.

Color adjustments include white balance, tone, and saturation. You can make most adjustments on the Basic tab, and then use controls on the other tabs to fine-tune the results. If you want Camera Raw to analyze your image and apply approximate tonal adjustments, click Auto on the Basic tab.

To apply the settings used for the previous image, or to apply the default settings for the camera model, camera, or ISO settings, choose the appropriate command from the Camera Raw Settings menu

Make other adjustments and image corrections.

Use other tools and controls in the Camera Raw dialog box to perform such tasks as sharpening the image, reducing noise, correcting for lens defects, and retouching.

Set options to specify how images are saved from Camera Raw and how Photoshop should open them. You can access the Workflow Options settings by clicking the link beneath the image preview in the Camera Raw dialog box.

Save the image, or open it in Photoshop or After Effects. 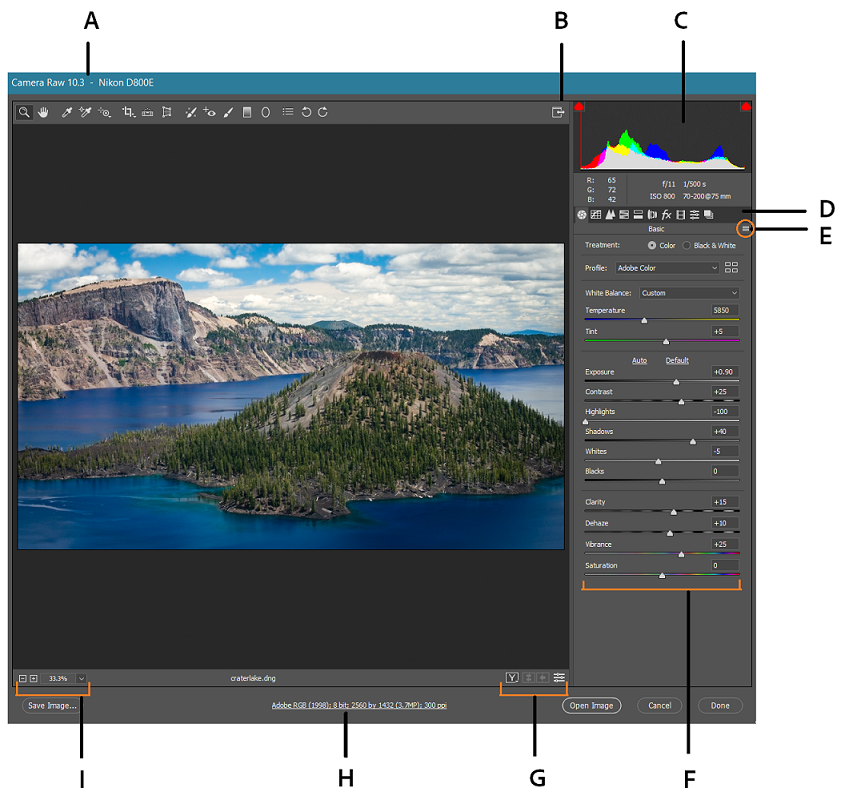 The Camera Raw zoom controls are:

Beginning with version 8.4 for Photoshop CC, Camera Raw provides advanced Preview controls that let you quickly compare the Before/After states of an image:

Shows the red, green, and blue values of the pixel under the pointer in the preview image.

Fine-tune tonality using a Parametric curve and a Point curve.

Compensate for chromatic aberration, geometric distortions, and vignetting caused by the camera lens.

Apply camera profiles to raw images to correct color casts and adjust non-neutral colors to compensate for the behavior of a camera’s image sensor.

Save and apply sets of image adjustments as presets.

Create versions of a photo that record its state at any point during the editing process.

Video tutorial: Compare Camera Raw adjustments before and after

Work with the Camera Raw cache in Adobe Bridge

Because caches can become very large, you may want to purge the Camera Raw cache or limit its size. You can also purge and regenerate the cache if you suspect that it is corrupted or old.

Work with Camera Raw and Lightroom

Camera Raw and Lightroom share the same image-processing technology to ensure consistent and compatible results across applications. For Camera Raw to view image adjustments made in the Develop module of Lightroom, metadata changes must be saved to XMP in Lightroom.

Adjustments made in Camera Raw are also displayed in the Adobe Bridge Content and Preview panels.

To view Lightroom changes in Camera Raw, and to ensure that Camera Raw adjustments can be viewed in Lightroom and Adobe Bridge, do the following:

Camera Raw reads only the current settings for the primary image in the Lightroom catalog. Adjustments made to virtual copies are not displayed or available in Camera Raw.