How export to Flash works

You can export your Encore project either for local use (all files present locally) or to a webserver (video files present on streaming server).

In both cases, you specify the folder in which the output is stored. Encore creates the following files and a folder that contains the generated output:

The SWF file enables the browsers or Flash players to play the video content that you upload to a server. The flashdvd.swf file does not contain the actual video—it is, instead, a front end for the generated video output. The flashdvd.swf file reads the AuthoredContent.xml file and plays the Flash output accordingly and remains static even when your video has changed.

This XML file contains the information about the video output files such as filenames, association of videos with menus, and navigation. You update this XML file when your video files or the menu structure change. If you choose to upload your Flash output to a server, the URLs of the videos are updated in this file.

The HTML file that hosts the flashdvd.swf file. This file gathers the required information about the first play setting and menu structure from the AuthoredContent.xml file.

This folder contains the Flash videos and the menu images and icons. The Flash video files are either FLV or F4V format, based on your choice.

If you are publishing the video directly to the web server, Encore updates the AuthoredContent.xml file with the URLs for the assets received from the server. In this process, all video files (FLV and F4V) are uploaded to the server.

If you do not have access to a server, choose the Keep With Flash SWF option in Encore’s Build panel. The FlashDVD content is saved in the specified destination folder. Because your video now resides in the local or a shared network folder, the AuthoredContent.xml file contains the relative path to the Sources folder.

Typically, you host the video files on a Streaming server and host the other output files (Sources,AuthoredContent.xml,Theme.xml, index.html) on a web server.

You can choose one from the fifteen export quality presets that provide you five frame sizes, each with three quality presets: Low, Medium, and High quality. Of the five frame sizes, two are standard size and the remaining are widescreen formats. In Addition to system presets, now you can create custom presets of different frame sizes with different quality settings from Edit Quality Presets from Build panel. For a video tutorial on exporting your project to Flash, see http://tv.adobe.com/watch/adobe-evangelists-jason-levine/authoring-a-flash-based-dvd-for-the-web/.

Export your current project to Flash

Adobe recommends posting Flash output to a webserver. Security settings on some local machines can prevent playing the video in these machines.

Keep in mind the following tips as you plan your projects for interactive viewing on the web:

You can use a menu element to create a link from Flash output to an external URL on the web. When viewers click a button that goes to that menu element, instead of seeing a menu display, they see the web page of the specified URL.

Unless you set up privileges in Flash Player, the URL must be in the same domain as your Flash project.

Enables you to move among chapter points in the movie.

Enables you to have a quick preview of the video. With each click, the video skips 5 seconds, and resumes playback from the new location.

Toggle this button to play or pause the movie.

Lets you “seek” through the length of the video. You can drag the seek bar to move across the frames in the video. When a movie is searched, red bars appear in the progress bar corresponding to scenes containing the search terms.

Displays the duration for which the video has played, and the total time.

Helps you search the contents of the movie being played.

Displays the title of the movie.

Displays the menu that you visited previously.

Displays the menu of the movie. Clicking the button again stops the menu display. Creating pop-up menus for Flash DVD is the same as that for blu-ray discs.

Displays subtitles on the screen. Click Subtitles, and select from the languages available in the menu. Click Off to turn stop subtitle display.

Toggle this button to mute/unmute a phone.

Use this control to increase or decrease the volume of audio in the movie being played.

When you build an Encore project in Flash, a Theme.XML file is created at the location of the build. Configure the contents of the file to customize the appearance of playback controls in the Flash DVD display. The process for customizing the controls is available within the file itself. For example, you can customize the properties of the search bar using the SearchBar tag.

You can search for the following types of content when playing a movie in the Flash DVD player:

You can search subtitles in timelines, slideshows, playlists, and chapter playlists.

Note:  Only subtitles containing text are searched. FAB image subtitles do not generate a text output, and so, cannot be searched.

Search text in speech transcript metadata of clips in a Timeline.

Note:  Speech Transcript for a clip can be generated from Premiere Pro using its Speech- to- Text metadata feature.

Names of menu buttons as set in the property panel 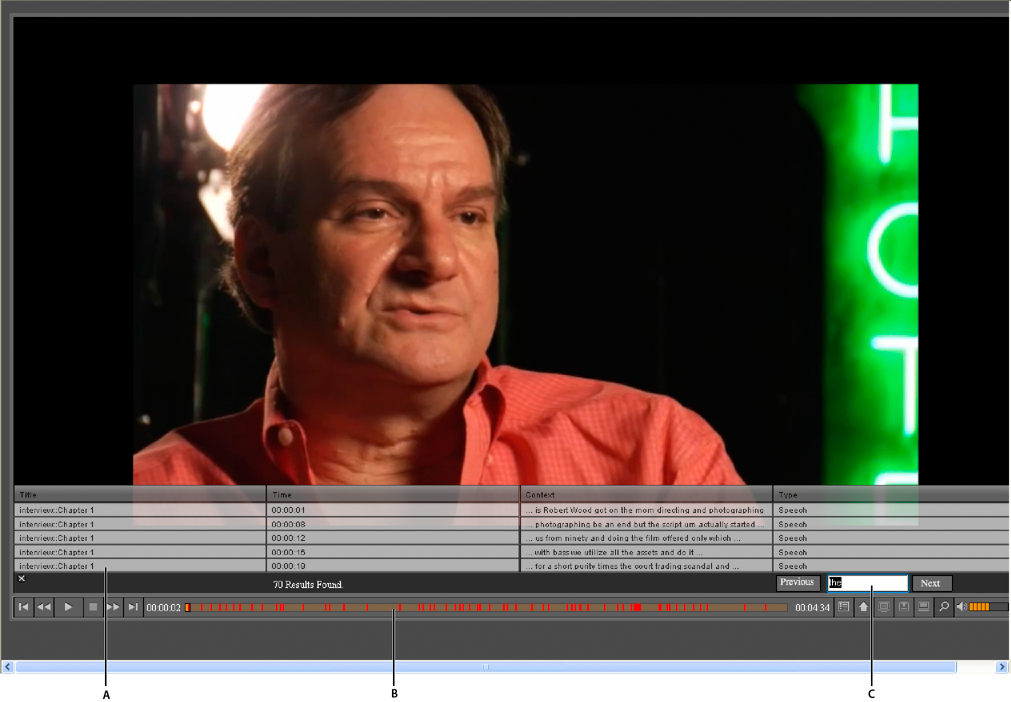 Search field in the Flash DVD player in the browser

Click the heading row of the column to sort the column.

When you build an Encore project in Flash format, the subtitles in the project are also exported. The Flash DVD player searches Subtitles that are in the text format. Image subtitles are not searched.

You can add backgrounds to Flash export using templates. For example, rather than playing against a standard black background, your project plays in a frame or against a background image that reflects the motif of menus or chapter icons. You can create HTML templates and then import them to your project.

You can create your own templates and import them into Encore. A template consists of a folder containing an index.html file as well as other content referenced by index.html. Your index.html can contain HTML tags in addition to tags supported by Encore. When you export your project to Flash format, these tags are replaced with SWF content, and the video is placed at the location of the tag in the HTML file. Encore looks for the following supported tags in the template index.html file and replaces them with the appropriate value or code:

<encoreswfobject> is the mandatory tag. Others are optional.

Set up a local FMS server