A Viewer Preset is a collection of settings that determine how users view rich-media assets on their computer screens and mobile devices. If you are an administrator, you can create Viewer Presets. Settings are available for an array of viewer configuration options. For example, you can change the viewer display size or zoom behavior.

For instructions on creating and customizing your own HTML5 viewer presets, see the Adobe Scene7 HTML5 Viewer SDK available as a download from Adobe Developer Connection.

This section describes how to create, edit, and manage viewer presets. You can apply a viewer preset to an asset anytime you preview it. See Applying Viewer Presets. 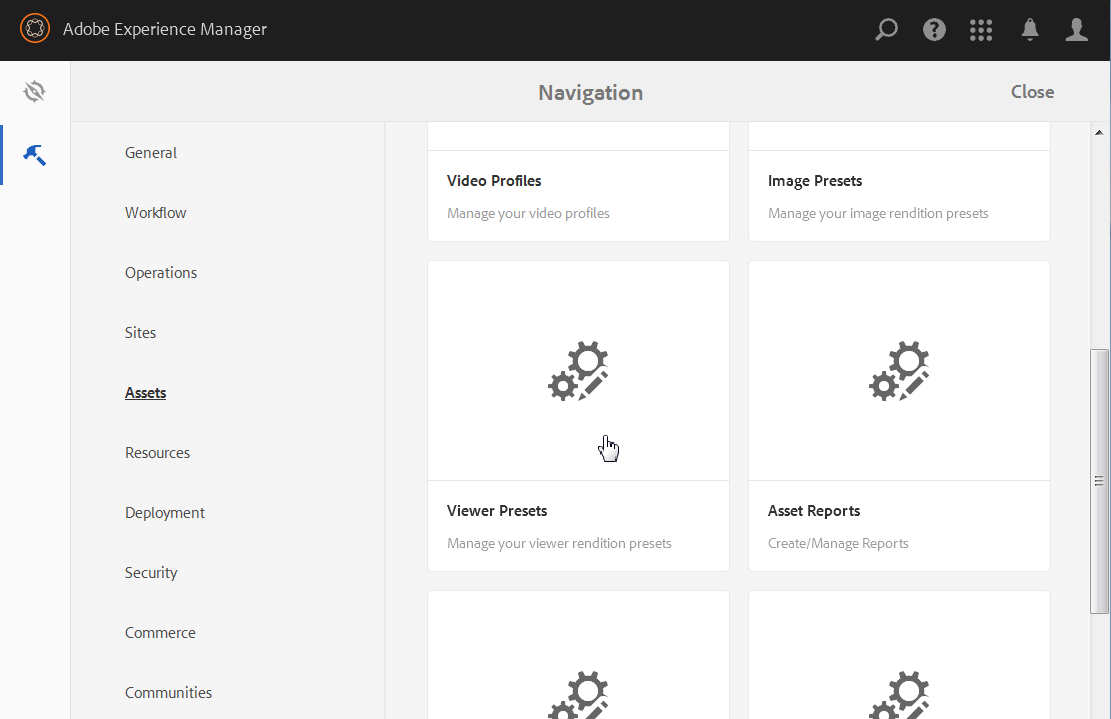 Different web pages have different needs. For example, sometimes you want a web page that provides a link that opens the HTML5 Viewer in a separate browser window. In other cases, it may be necessary to embed the HTML5 Viewer directly on the hosting page. In the latter case, the web page may have a static layout. Or, it may be "responsive" and display differently on different devices or for different browser window sizes. To accommodate these needs, all the pre-defined, out-of-the-box HTML5 Viewers that come with Dynamic Media support both static web pages and responsive designed web pages.

See Responsive Static Image library in the Scene7 Image Serving API Help for more information on how to embed responsive viewers onto your web pages.

Please note that you must publish all out-of-the-box viewers before you first use them.
See Publishing Viewer Presets.

All out-of-the-box Viewer Presets that come with Dynamic Media are fully compatible with the following systems:

For information about supported web browser and operating system versions for Viewers, you can review the Viewers Release Notes.

All out-of-the-box viewer presets in Dynamic Media come already activated (on), but you must publish them.
See Publishing Viewer Presets.

The following table identifies the mobile viewer gestures that are supported on iOS, Android 2.x, and Android 3.x devices.

Creating viewer presets lets you apply various settings to view and interact with assets. However, you do not need to create new viewer presets. If you prefer, you can use the default, out-of-the-box viewer presets that already come with AEM Assets.

If you choose to create a new viewer preset, after you save it, the viewer's state is automatically activated (set to On) in the Viewer Presets page. This state means that it is visible in the Dynamic Media component and the Interactive Media component and whenever you preview an image or video.

Some viewer presets have exclusive settings that can affect the use and overall behavior of the viewer. Depending on the viewer preset you are creating, you may want to be aware of these special considerations.

To create a new viewer preset:

About Display Modes for image thumbnails in the panel

When you create or edit an Interactive Video viewer preset, you have the choice of which Display Mode setting to use when you select InteractiveSwatches from the Selected Component pull-down menu under the Behavior tab. The display mode you choose affects how and when thumbnails appear while the video is playing. You can choose either a  segment display mode (default) or a continuous display mode.

About Auto Scrolling Behavior in the Interactive Video Viewer

The auto scroll behavior of thumbnails in the Interactive Video viewer functions independently of the display mode that you chose.

If you disable Auto Scroll (clear the check box) in the viewer preset, during video playback by the user, the panel only displays the first thumbnail image for the entire length of the video. However, a user can manually scroll through the thumbnails using the up and down arrow icons, if desired.

When you enable (select) Auto Scroll in the viewer preset, during video playback, thumbnail images assigned to a video segment scroll into view at the start of a segment. There are instances, however, where certain thumbnails within a segment display twice as long as other thumbnails before or after it. This behavior occurs because the number of thumbnails in a segment is greater than the number that are visible in the panel, and are not evenly divisible.

Video sub-segment 3 does not extend beyond the thumbnails that are assigned to it. Notice also that thumbnails 4, 6, and 7 are visible in the panel twice as long as the other thumbnails.

The logic that the viewer uses for how many thumbnails are displayed in the panel based on the number of available positions is as follows:

When creating Carousel Banner viewer presets, changing the style of hotspots can be accessed as follows:

The Viewer Presets that are available in the user interface depends on which one are active. By default, a viewer preset is "On" after you create it. You may want to deactivate viewer presets if the list becomes too crowded or you do not want a viewer preset made available to use.

All out-of-the-box viewer presets in Dynamic Media come already activated (on), but you must publish them. See Publishing Viewer Presets.

To activate or deactivate viewer presets:

However, to deliver an asset with a viewer preset, you must publish the viewer preset as well. All viewer presets must be activated and published to obtain URL or embed code for an asset

To publish viewer presets that you have added:

If you have already published both the asset and the selected viewer, the URL and Embed buttons appear after you select a viewer preset.

To apply a Viewer Preset to an asset:

To get the URLs for Viewer Presets, see Linking URLs to your Web application. See also Embedding the Video Viewer on a Web Page.

If you are using AEM as your WCM, you can add assets using the viewer presets directly on the page. See Adding Dynamic Media Assets to Pages.