Importing and interpreting video and audio

Interlacing is a technique developed for transmitting television signals using limited bandwidth. In an interlaced system, only half the number of horizontal lines for each frame of video are transmitted at a time. Because of the speed of transmission, the afterglow of displays, and the persistence of vision, the viewer perceives each frame in full resolution. All of the analog television standards use interlacing. Digital television standards include both interlaced and noninterlaced varieties. Typically, interlaced signals are generated from interlaced scanning, whereas noninterlaced signals are generated from progressive scanning.

Each interlaced video frame consists of two fields. Each field contains half the number of horizontal lines in the frame; the upper field (or Field 1) contains the odd-numbered lines, and the lower field (or Field 2) contains the even-numbered lines. An interlaced video monitor displays each frame by first drawing all of the lines in one field and then drawing all of the lines in the other field. Field order specifies which field is drawn first. In NTSC video, new fields are drawn to the screen approximately 60 times per second, corresponding to a frame rate of approximately 30 frames per second. 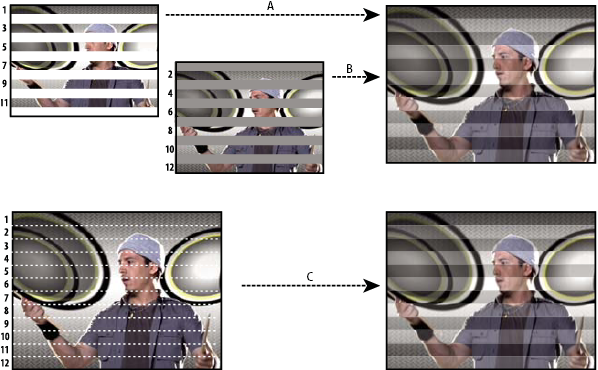 If you want to use interlaced or field-rendered footage (such as NTSC video) in an After Effects project, you get the best results if you separate the video fields when you import the footage. After Effects separates video fields by creating a full frame from each field, preserving all of the image data from the original footage.

After Effects creates field-separated footage from a single formerly interlaced frame by splitting it into two independent frames. Each new frame has only half the information of the original frame, so some frames may appear to have a lower resolution than others when viewed at Draft quality. When you render the final composition, After Effects reproduces high-quality interlaced frames for output. When you render a movie at Best quality, After Effects interpolates between the scan lines of a field to produce maximum image quality.

You can only remove pull-down after you have separated fields.

When you render a composition containing field-separated footage, set the Field Rendering option to the same field order as your video equipment. If you don’t field-render the composition, or if you field-render with the incorrect settings, the final movie may appear too soft, jerky, or distorted.

To quickly give video footage a more film-like appearance, import the footage twice, and interpret each footage item with a different field order. Then add them both to the same composition and blend them together. The misinterpreted layer adds some film-like blur.

The order in which the fields are displayed is important, especially when the fields contain motion. If you separate video fields using the wrong field order, motion does not appear smooth.

If a file does not contain a field order label, you can match the original field order of your footage. If you are not sure which field order was used to interlace a footage item, use this procedure to find out.

Chris Pirazzi provides technical details of fields and interlacing on his Lurker's Guide to Video website.

Remove 3:2 or 24Pa pulldown from video

When you transfer 24-fps film to 29.97-fps video, you use a process called 3:2 pulldown, in which the film frames are distributed across video fields in a repeating 3:2 pattern. The first frame of film is copied to fields 1 and 2 of the first frame of video, and also to field 1 of the second video frame. The second frame of film is then spread across the next two fields of video—field 2 of the second video frame and field 1 of the third frame of video. This 3:2 pattern is repeated until four frames of film are spread over five frames of video, and then the pattern is repeated.

Phase occurs as a result of two conversions that happen during 3:2 pulldown: 24-fps film is redistributed through 30-fps video, so each of four frames of 24-fps film is spread out over five frames of 30(29.97)-fps video. First, the film is slowed down 0.1% to match the speed difference between 29.97 fps and 30 fps. Next, each film frame is repeated in a special pattern and mated to fields of video. 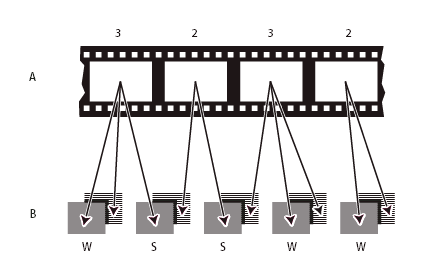 When you apply 3:2 pulldown to footage, one frame of the film (A) is separated into two or three interlaced video fields (B) which are grouped into video frames containing two fields each.

When importing interlaced video that was originally transferred from film, you can remove the 3:2 pulldown that was applied during the transfer from film to video as you separate fields so that effects you apply in After Effects don’t appear distorted.

Before you remove 3:2 pulldown, separate the fields as either upper-field first or lower-field first. Once the fields are separated, After Effects can analyze the footage and determine the correct 3:2 pulldown phase and field order. If you already know the phase and field order, choose them from the Separate Fields and the Remove menus in the Interpret Footage dialog box.

A P2 card is a solid-state memory device that plugs into the PCMCIA slot of a Panasonic P2 video camera. The digital video and audio data from the video camera is recorded onto the card in a structured, codec-independent format known as MXF (Media eXchange Format). Specifically, Adobe Premiere Pro and After Effects support the Panasonic Op-Atom variant of MXF, with video in AVC-Intra 50, AVC-Intra 100, DV, DVCPRO, DVCPRO50, and DVCPRO HD formats. A clip is said to be in the P2 format if its audio and video are contained in Panasonic Op-Atom MXF files, and these files are located in a specific folder structure.

The root of the P2 folder structure is a CONTENTS folder. Each essence item (an item of video or audio) is contained in a separate MXF wrapper file; the video MXF files are in the VIDEO subfolder, and the audio MXF files are in the AUDIO subfolder. The relationships between essence files and the metadata associated with them are tracked by XML files in the CLIP subfolder.

Adobe Premiere Pro and After Effects do not support proxies recorded by Panasonic P2 camcorders in P2 card PROXY folders.

The video and audio on a P2 card are already in a digital form, as if the P2 card were a hard disk, so no capture step is involved in importing media from a P2 card. The process of reading the data from the card and converting it to a format that can be used in a project is sometimes referred to as ingest.

For your computer to read P2 cards, you must install the appropriate driver, which you can download from the Panasonic website. Panasonic also provides the P2 Viewer application, with which you can browse and play media stored on a P2 card.

Because Panasonic P2 cards use the FAT32 file system, each file is limited to a size of 4 GB. When a shot is recorded that requires more than the 4 GB, a P2 camera creates another file and continues recording the shot to the new file without interruption. This is referred to as clip spanning, because the shot spans more than one file or clip. Similarly, a camera may span a shot across files on different P2 cards: if the camera has more than one P2 card loaded, it will record the shot until it runs out of room on the first P2 card, create a new file on the next P2 card with available space, and continue recording the shot to it. Although a single shot can be recorded to a group of multiple spanned clips, the multiple-file shot is designed to be treated as a single clip or footage item in a video editing application. For After Effects to automatically import a group of spanned clips simultaneously and assemble them into a single footage item, they must all have been recorded to the same P2 card and none of the files can be missing, including the associated XML metadata file.

The Date column in the Project panel shows when each source clip was acquired. After you import spanned clips, you can use the Date value to determine their correct chronological order within the shot.

For additional information on the Panasonic P2 format and workflows with Adobe digital video software, see the Adobe website: