About linking and navigation

Learn about linking and navigation in Dreamweaver and absolute, document-relative, and site root-relative paths.

After you’ve set up a Dreamweaver site to store your website documents and have created HTML pages, you’ll want to create connections from your documents to other documents.

Dreamweaver provides several ways to create links to documents, images, multimedia files, or downloadable software. You can establish links to any text or image anywhere within a document, including text or images in a heading, list, table, absolutely-positioned element (AP element), or frame.

There are several different ways of creating and managing links. Some web designers prefer to create links to nonexistent pages or files as they work, while others prefer to create all the files and pages first and then add the links. Another way to manage links is to create placeholder pages, in which you add and test links before completing all your site pages.

Each web page has a unique address, called a Uniform Resource Locator (URL). However, when you create a local link (a link from one document to another on the same site), you generally don’t specify the entire URL of the document you’re linking to; instead, you specify a relative path from the current document or from the site’s root folder.

There are three types of link paths:

It is best to use the type of linking you prefer and are most comfortable with—either site root- or document-relative. Browsing to links, as opposed to typing in the paths, ensures that you always enter the right path.

You must use an absolute path to link to a document or asset on another server. You can also use absolute paths for local links (to documents in the same site), but that approach is discouraged—if you move the site to another domain, all of your local absolute-path links will break. Using relative paths for local links also provides greater flexibility if you need to move files within your site.

When inserting images (not links), you can use an absolute path to an image on a remote server (that is, an image that is not available on the local hard drive).

Document-relative paths are usually best for local links in most websites. They’re particularly useful when the current document and the linked document or asset are in the same folder and are likely to remain together. You can also use a document-relative path to link to a document or asset in another folder by specifying the path through the folder hierarchy from the current document to the linked document.

The basic idea of document-relative paths is to omit the part of the absolute path that is the same for both the current document and the linked document or asset, providing only the portion of the path that differs.

For example, suppose you have a site with the following structure: 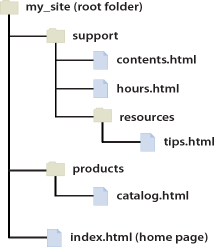 Site root–relative paths describe the path from the site’s root folder to a document. You may want to use these paths if you are working on a large website that uses several servers, or one server that hosts several sites. However, if you are not familiar with this type of path, you may want to stick to document-relative paths.

However, when you move or rename the documents targeted by site root–relative links, you must update those links, even if the documents’ paths relative to each other haven’t changed. For example, if you move a folder, you must update all site root–relative links to files in that folder. (If you move or rename files using the Files panel, Dreamweaver updates all relevant links automatically.)