In Photoshop, you use the Timeline panel to create animation frames. Each frame represents a configuration of layers. 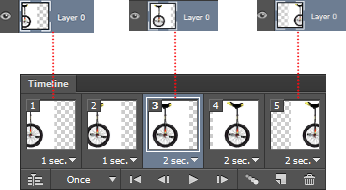 Illustration of an animation. The unicycle image is on its own layer; the position of the layer changes in each frame of the animation.

To create frame-based animations in Photoshop, use the following general workflow.

Add a layer or convert the background layer.

If your animation includes several objects that are animated independently, or if you want to change the color of an object or completely change the content in a frame, create the objects on separate layers.

Add a frame to the Timeline panel.

See Add frames to an animation.

Edit the layers for the selected frame.

Do any of the following:

The number of frames you can create is limited only by the amount of system memory available to Photoshop.

You can generate new frames with intermediate changes between two existing frames in the panel using the Tween command. This is a quick way to make an object move across the screen or to fade in or out. See Create frames using tweening.

There are different options for saving your frame animation:

Add frames to an animation

Adding frames is the first step in creating an animation. If you have an image open, the Timeline panel displays the image as the first frame in a new animation. Each frame you add starts as a duplicate of the preceding frame. You then make changes to the frame using the Layers panel.

You can also propagate frames by Shift-selecting any consecutive group of frames in the layer and changing an attribute in any of the selected frames.

The term tweening is derived from "in betweening," the traditional animation term used to describe this process. Tweening (also called interpolating) significantly reduces the time required to create animation effects such as fading in or fading out, or moving an element across a frame. You can edit tweened frames individually after you create them.

Add a new layer for each new frame

The Create New Layer For Each New Frame command automatically adds a new layer visible in the new frame but hidden in other frames. This option saves time when you are creating an animation that requires you to add a new visual element to each frame.

When you create a new layer, it is visible in all animation frames by default.

You can specify a delay—the time that a frame is displayed—for single frames or for multiple frames in an animation. Delay time is displayed in seconds. Fractions of a second are displayed as decimal values. For example, one-quarter of a second is specified as .25. If you set a delay on the current frame, every frame you create after that will remember and apply that delay value.

. (No icon appears when Disposal Method is set to Automatic.)

You select a looping option to specify how many times the animation sequence repeats when played.