Adding shapes and images to titles

You can use the drawing tools in the Monitor panel to create a variety of shapes, such as rectangles, ellipses, and lines. After you draw a shape, you can apply a style to it, and change the fill and stroke attributes. 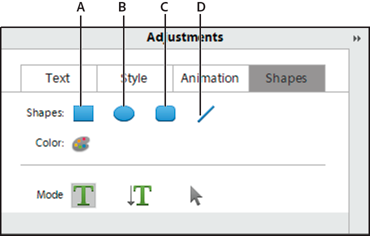 When adding an image to a title, you can add it as a graphic element or place it in a box to become part of the text. Premiere Elements accepts both bitmapped images and vector‑based artwork. Vector-based art is rasterized to a bitmapped version in the Monitor panel. By default, an inserted image appears at its original size. Once inserted into a title, you can modify the image’s properties (such as scale) as you would other objects.

note: Unlike text and graphic objects, images you add to titles aren’t embedded as part of the title. Instead, the image references the source image file in the same way that items listed in the Project Assets panel refer to source audio and video files.

When you place an image in a text box, the image flows with the text as though it were a text character. It can have the same attributes as other characters, such as strokes.