Sync Settings has been removed in InDesign CC 2015.2. The existing service in InDesign and CC 2014 will become unavailable in the near future. See the information below to migrate your presets/settings from an earlier version of InDesign to the latest one or from one computer to another.

Migrate settings from one major version to another

If you choose not to migrate your settings when you install InDesign, or if you're upgrading to InDesign from an older version of InDesign, you can select Edit > Migrate Previous Local Settings… to enable preset and preference migration at any point in time.

The main preference file is not migrated when you run the Migrate Presets menu command.

The information below is relevant only for InDesign CC versions earlier than 2015.1.

When you work on multiple computers, managing and syncing glyph sets, menu customizations, keyboard shortcuts, custom workspaces, and PDF presets among the computers could be a chore.

The new Sync Settings feature enables individual users to sync their settings using Creative Cloud. If you use two computers, for example, one at home and another at work, the Sync Settings feature makes it easy for you to keep those settings synchronized on these two computers. Also, if you have replaced your old computer with a new one and have reinstalled InDesign, you can get the application set up quickly with all your settings in place by just pressing a button.

Note: At any given time, you can activate InDesign on two computers only.

All sync operations are initiated by users. They cannot be scheduled or performed automatically (such as at launch or during shutdown).

Prerequisites for this feature to work:

After installation, when you launch the application and create a document or open an existing document for the first time, you will see a prompt asking whether you want to start the sync.

Prompt asking whether you want to start the sync

Use the sync settings feature

Do any one of the following:

When you launch InDesign with prior sync information available, and create a document or open an existing document for the first time, you will see a prompt asking whether you would like to sync the setting from the cloud. To initiate the sync, click Sync Settings Now.

The settings are downloaded to your local computers and are updated in the application. If you change glyph sets, keyboard shortcuts, custom workspaces, or PDF presets, you should initiate sync before you close the application. You can see the sync status in the left-bottom corner of the document status bar. Click the Sync Settings icon (

) in the status bar and then click Sync Settings Now. 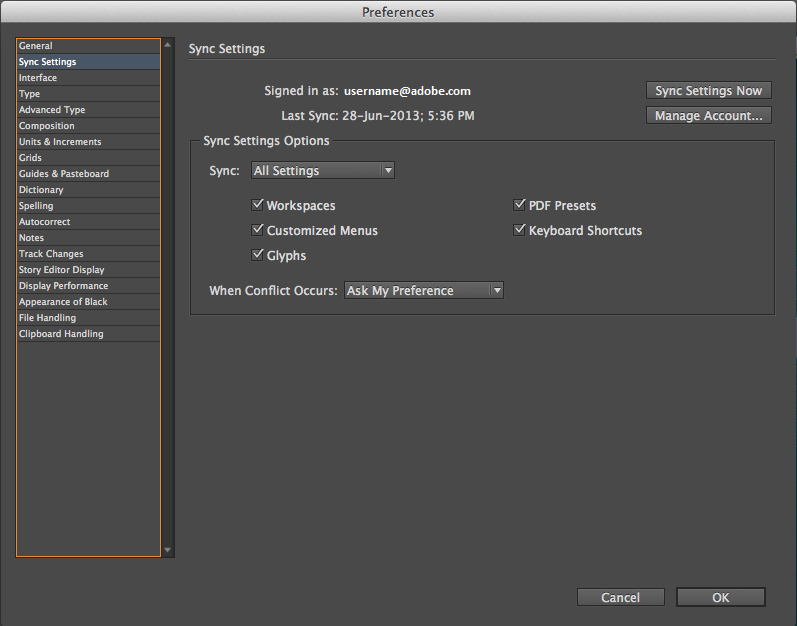 Select the settings you want to sync

Select the checkboxes for the settings that you want to sync. You can also choose what to do in case of conflict.

To sync your settings successfully, you must change the settings only from within the application. The sync settings feature does not sync any file that is manually placed in a folder location.

There are situations when the system could detect sync conflicts. Sync conflicts occur when the system is unable to determine whether you want a setting from Creative Cloud or from your local computer to be retained since both have been changed after the last sync operation.