Elements Organizer identifies and groups similar-looking faces. Learn how to add a name to easily access photos of that person in the People view.

Elements Organizer identifies and groups similar looking faces. Just add a name to easily access all photos of that person in the People view.

The advanced face recognition technology of Elements Organizer helps you name and organize the people in your photos. To name the people and to view the photos organized by the people tagged in them, switch to the People view. 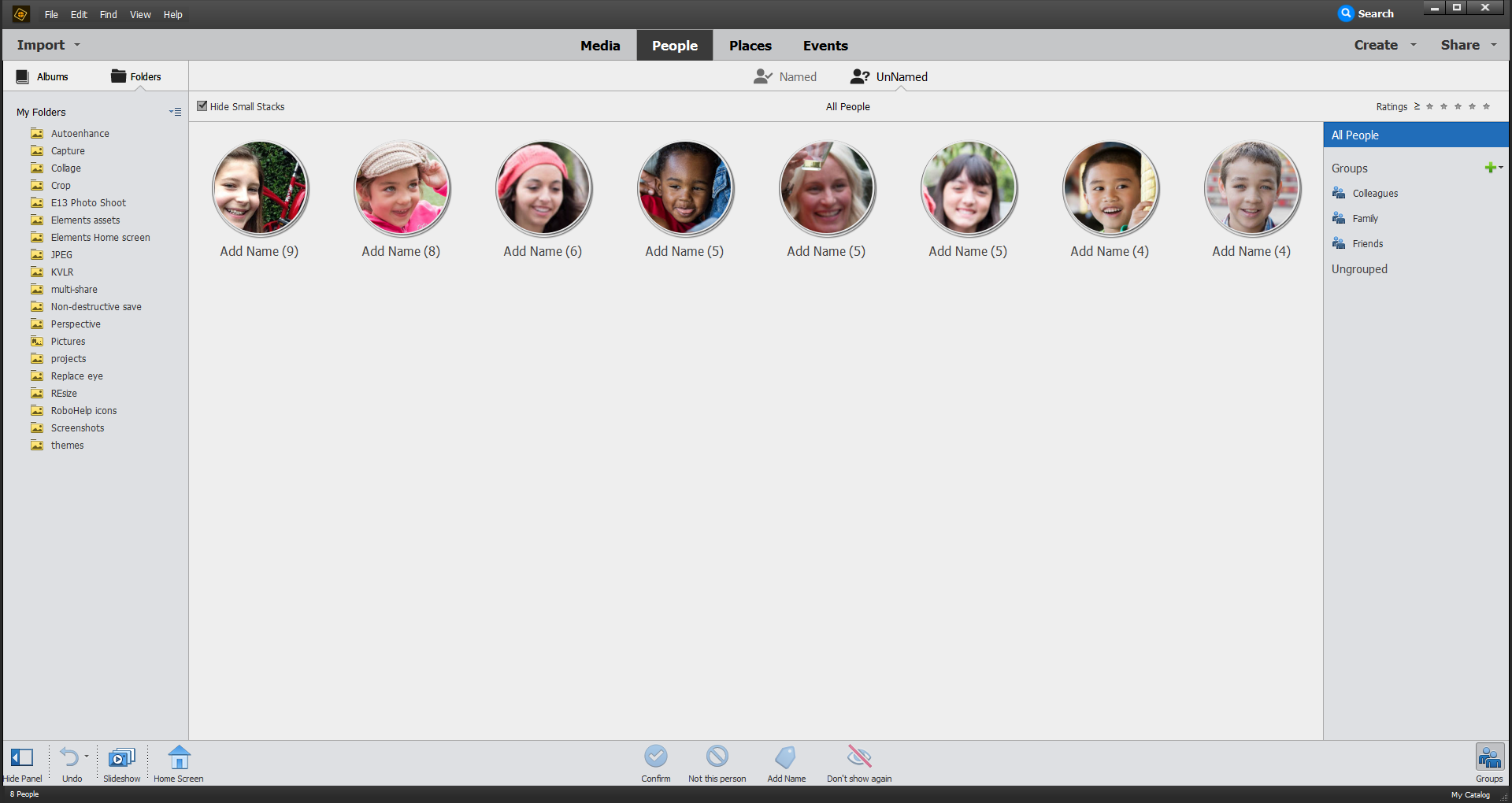 About marking faces in photos

You can name the faces that appear in photos to help organize and identify photos based on the people that appear in those photos. For example, if your friend Dave appears in some of your photos, you can name Dave and then sort/view the photos featuring Dave.

In the People view, the different faces are organized by people stacks. People stack refers to a set that has all the photos of the person named in Elements Organizer. For example, if a person appears a total of thirty times in all your media files, the thirty photos are displayed together as a set. The following figure shows sample stacks for John and Sharon.

The face image displayed at the top of the stack is called the profile picture.

Marking faces in the UnNamed tab

As you import your media files, Elements Organizer analyzes the photos in your catalog and groups similar faces together. The time taken to analyze can vary depending on the file type and the catalog type. For example, analyzing a RAW file would take a bit longer than analyzing a JPEG file.

The UnNamed tab displays the profiles of all the people who have not yet been named. You can name these people right here in the UnNamed tab. You can also exclude faces from a stack, specify that a face should not be displayed in Elements Organizer, or merge stacks.

Once you name faces, the faces, along with the photographs in which they appear, are displayed in the Named tab. You can at any time come back to the UnNamed tab and name additional faces that you have not yet named.

A single click on a stack displays the faces in that stack.

You can view photographs instead of faces by clicking Photos.

To switch back to viewing faces, click the Faces button.

Click a face to display the photo associated with the face. 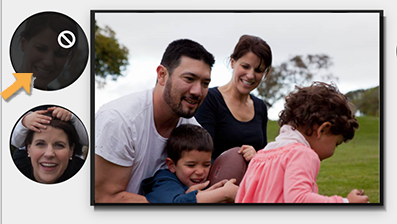 By default, Elements Organizer does not display stacks that contain only a small number of media files or in which all faces are unclear. To also view such stacks, clear the Hide Small Stacks checkbox. 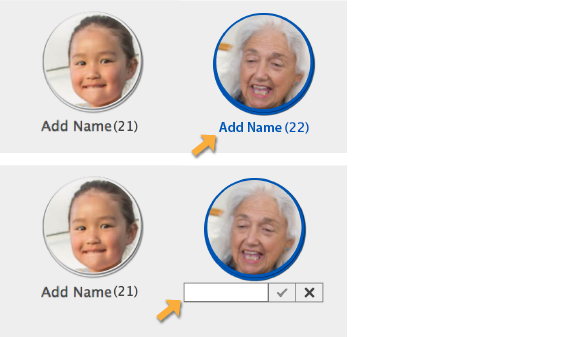 You can select multiple faces by keeping the Command (Mac OS) or Control (Windows) button, or the Shift button pressed while clicking these faces.

If the face belongs to some other person instead, click Not this person. The face is removed from the stack and is displayed as part of another stack in the UnNamed tab. You can then name the face as that of another person. 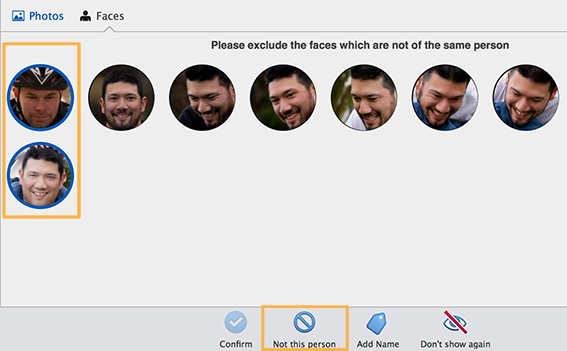 You can also hover over a face and click the white icon that appears. The face will be removed from the stack. 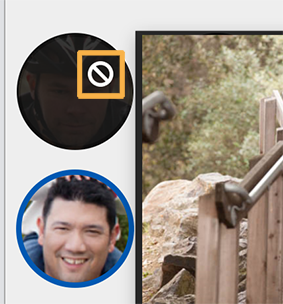 Use this option when you do not want to name this face at all.

Once you have prevented a face from being named using Don't show again, the only ways to name that face again are as follows: 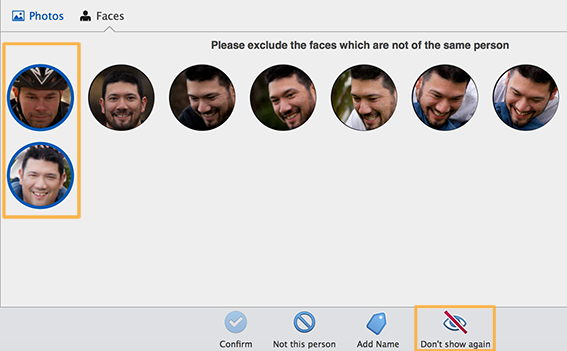 When you use Not this person, the face is removed from that stack but is still displayed in the UnNamed tab as part of another stack. You can assign the face to another person.

However, when you use Don't show again, the face is not displayed again in Elements Organizer.

Once you have removed the faces that do not belong to the person, click Add Names (located just below the stack).

All the faces in the stack are confirmed as belonging to the person you named, and are moved to the Named tab.

When you open a catalog created in a previous version, here is what happens:

Viewing and organizing People stacks in the Named tab

Once you have identified faces in the photos and labeled the people, switch to the Named tab to organize the photos further.

If more than one picture of the same person is found, Elements Organizer automatically identifies the best image to use for the profile pages.

You can also manually select the picture for the profile.

If there are more photos than can be displayed in the default view, click the > icon on the last photo or double-click on the face stack to go to the drill-down view where all the photographs in which these faces occur are displayed. You can then create a collage, a photo book, and so on from these photographs through the Create menu.

To view all faces or photographs associated with a person, single click on that person's stack in the Named tab.

By default, faces are displayed. To view photos instead of faces, click Photos. 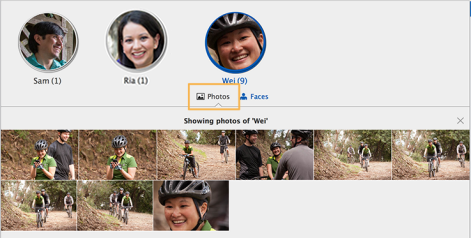 To confirm that the faces belongs to the person identified, select the faces and click Confirm. You can select multiple faces by keeping the Command (Mac OS) or the Control (Windows) button, or the Shift button pressed while clicking. 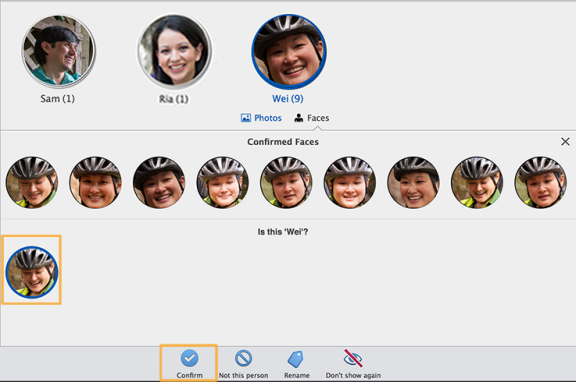 You can also select one or more faces individually and click the checkmark symbol to confirm. 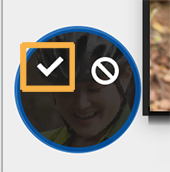 If a face does not belong to the person, you can remove it in one of the two ways:

The process for using these options is the same as described in the Adding Names sections earlier in the document.

If one or more faces belong to another person, you can rename the faces by clicking Rename.

The name you enter can be an existing name or a new name.

In some cases, you might want to merge two or more stacks (for example because they belong to the same person but have been identified as different). To merge stacks, do one of the following: 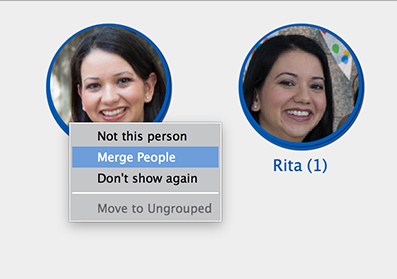 You can merge stacks in the UnNamed tab as well as in the Named tab.

There can be people in photos whose faces Elements Organizer was not able to identify in the initial workflows. For example, there may be some faces appearing in photos that were taken from a distance or had turned away faces, and so were not recognized as faces of people.

You can name such missing faces by marking them.

Automatic face recognition is supported only in photos. For videos and audio files, you need to label people manually using the Add a Person button. From the Context menu of the video or audio, click Add a Person and enter the name of the person. See the next section for details.

Adding one or more names to a photograph or video

In addition to naming faces in photos, you can also add one or more names to a photo or a video. Use one of the following ways for this:

The reason a generic face icon is displayed is that one photograph or video can be associated with several faces when you add names in this way. Therefore, the tag is applied on the media file as a whole and not on a particular face.

You can further improve identifying faces in photos by organizing them by groups. A group displays photo stacks of people tagged for that group.
For example, you can create a group named Work and tag photos of people from your professional contacts.

You can add faces to a group in any of the following ways:

Switching off or resetting face analysis