Understand the installation workflow, the architecture, the data flow, about the telephony adaptors, and about the Edge servers before you install Adobe Connect.

The Adobe Connect Central Application Server is built as a J2EE web application running on the Tomcat servlet engine. Called the application server, it manages users, groups, on‑demand content, and client sessions. Some of the application server’s duties include access control, security, quotas, licensing, and auditing and management functions such as clustering, failover, and replication. It also transcodes media, including converting Microsoft PowerPoint and audio. The application server handles meeting requests and content transfer requests (slides, HTTP pages, SWF files, and files in the File Share pod) over an HTTP or HTTPS connection.

Adobe Connect requires a database for persistent storage of transactional and application metadata, including user, group, content, and reporting information. You can use the embedded database engine (SQL Server 2016 Express Edition) included in the Adobe Connect installer, or you can purchase and install a supported Microsoft SQL Server Enterprise Edition. See, Adobe Connect technical specifications for information on supported databases.

Adobe Connect supports several telephony adaptors to enable audio conferencing. You can choose to install one or more adaptors during the installation process.

The following diagram illustrates how data flows between a client application and Adobe Connect. 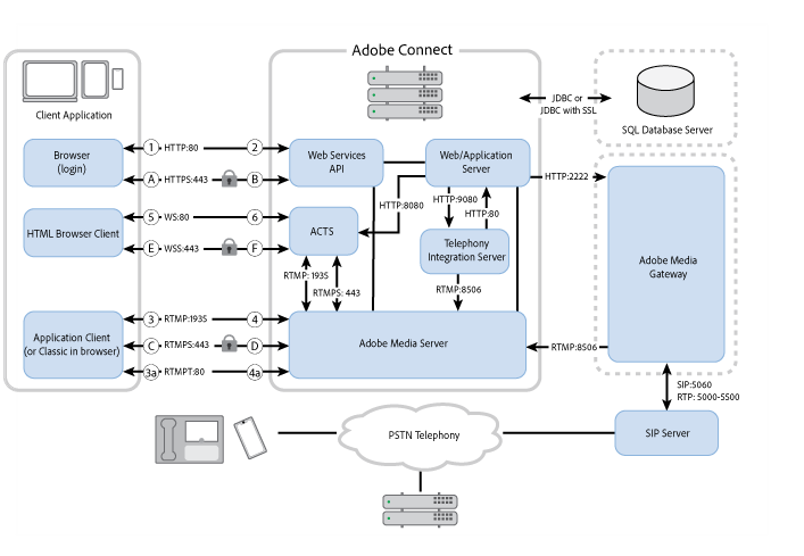 The following diagram illustrates how data flows between telephony services and Adobe Connect. 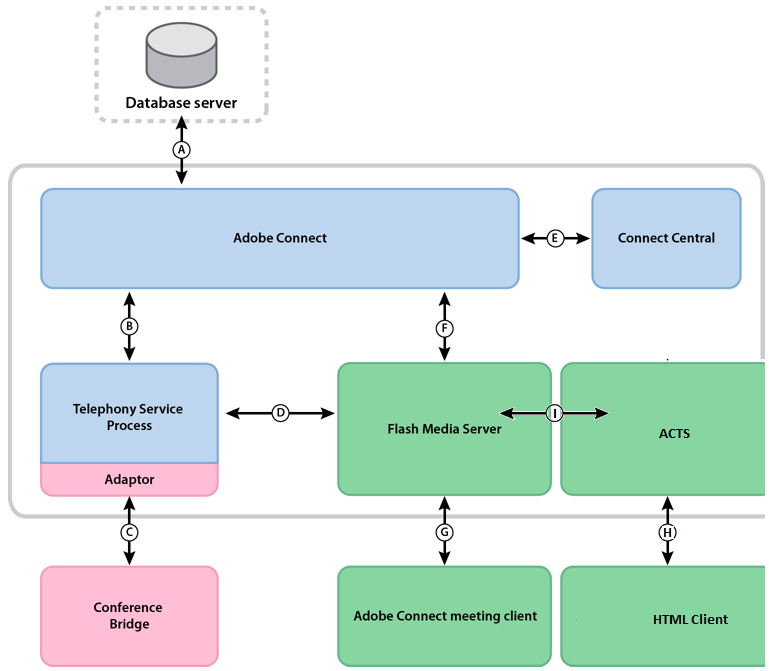 The following steps describe how to design, install, and configure an Adobe Connect system. Some steps require a decision, and other steps require you to complete a task. Each step refers you to background information about the decision or task.

Choose which database to use.

If you chose SQL Server in step 1, install it.

Note: Skip this step, if you are installing the embedded database.

Verify that Adobe Connect and the selected components are installed correctly.

There are many possibilities for integrating Adobe Connect into your organization’s existing infrastructure. It’s a good idea to verify that Adobe Connect is functional after configuring each of these features.

Integrate with a SIP provider

Integrate with an LDAP Directory

(Optional) Choose whether to install Adobe Connect in a cluster.

For more information, see Choosing to deploy Adobe Connect in a cluster.

Choosing to deploy Adobe Connect in a cluster

You can install all Adobe Connect components, including the database, on a single server, but this system design is best used for testing, not production.

When you install Adobe Connect in a cluster, use a supported SQL server and install it on a separate computer.

In the Application Management Console, you can configure shared storage so that content is stored on external devices and cached on the Adobe Connect server. For a fresh installation, you can also configure NAS.

Reliable networked systems are designed with redundant components; if one component fails, another identical (redundant) component can take over the same job. When a component fails and its counterpart takes over, failover has occurred.

Ideally, every component in a system should be redundant, not just Adobe Connect. For example, you could use multiple hardware load balancing devices (such as BIG‑IP by F5 Networks), a cluster of servers hosting Adobe Connect, and SQL Server databases on multiple external computers. Build your system with as many redundancies as possible and add to your system over time. 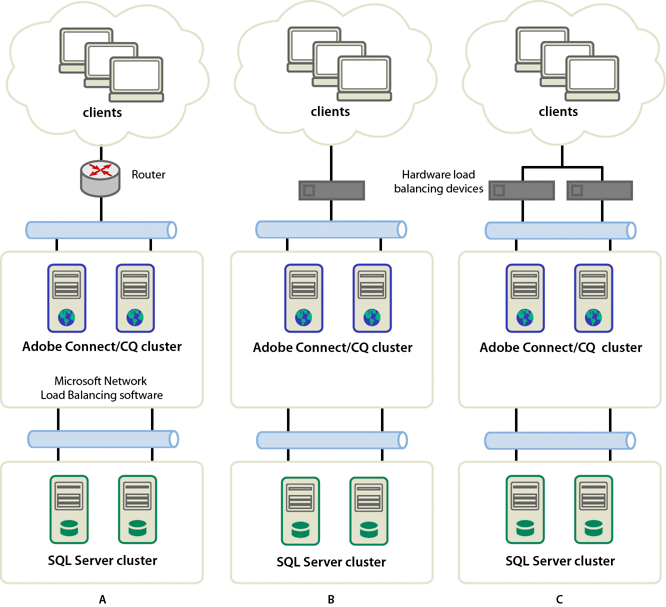 Adobe Connect uses a database to store information about users, content, courses, meetings, and reports. You can use the embedded database engine (included with the installer), or you can install a supported SQL server (which must be purchased separately).

The embedded database engine is recommended for testing and development. It uses the same data structures as SQL Server 2012 Enterprise Edition, but it isn’t as robust.

The embedded database engine has the following limitations:

Install SQL Server in mixed login mode so that you can use SQL authentication. Set the database to not case sensitive.

Use SQL Server in the following deployment scenarios:

During the Adobe Connect installation process, you can install one or more telephony adaptors.

Edge servers are an extra layer between the client Internet connection and the origin.

If your license permits it, you can install and configure a cluster of edge servers. Deploying edge servers in a cluster has the following benefits:

When an edge server fails, clients are routed to another edge server.

If you require more than 100 simultaneous meetings, a single edge server can run out of memory. Edge servers can be clustered behind a load balancer.

Edge servers authenticate users and authorize their requests for web services such as Adobe Connect Meeting rather than forwarding every request to the origin server and consuming its resources for these tasks. If the requested data is found in the edge server’s cache, it returns the data to the requesting client without calling Adobe Connect. 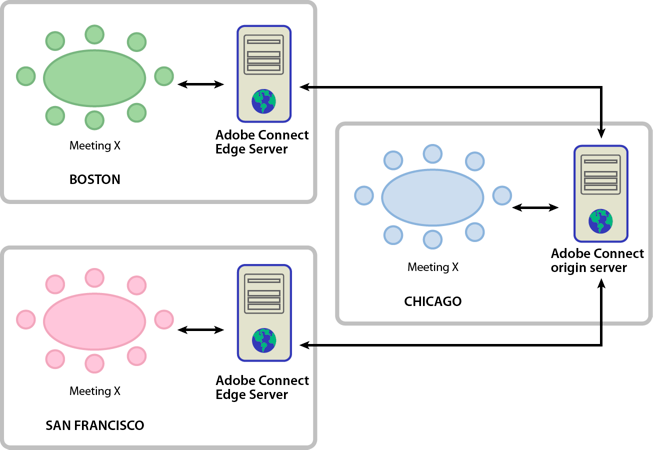 Building and optimizing a VMWare environment

Installing Adobe Connect on VMWare is no different from installing it on a physical computer. For information about hardware, software, and configuration requirements, see the white paper about running Adobe Connect in a virtual environment.

Universal Voice enables Adobe Connect to send and receive audio from any audio conferencing provider. You can record the audio along with your web conference and stream the audio to VoIP-only attendees.

You can also use the Adobe Connect Telephony Java API to develop an integrated telephony adaptor for any audio conferencing provider.

The following table describes the features of both solutions: