A curriculum can include courses, presentations, and meetings. You can define prerequisites for a curriculum, and you can design your program so that users can test out of certain curriculum items.

As users complete items in the curriculum, you can track their progress and generate reports to ensure that the curriculum meets the learning objectives.

The key features of curriculums let you do the following:

A wizard guides you through the main steps of creating a curriculum, such as entering curriculum information and selecting courses for the curriculum. After you create a curriculum, you can complete additional tasks, such as adding enrollee and sending reminders.

In creating a curriculum, your workflow involves the following tasks:

Browse to a curriculum location

You can create or browse to a folder in the Training library in which you want to publish the curriculum (you must have permission to access the folder). When you determine a location, you click New Curriculum to open the New Curriculum wizard and create your curriculum in the selected location.

Note: Depending on your license and your permissions, all the tabs displayed in the top row in Adobe Connect Central may not be visible.

Note: If you want to save your curriculum in your User Training folder, you can bypass this procedure by simply clicking the New Curriculum link on the Adobe Connect Central home page and following the steps to enter curriculum information.

A. Determine a location B. Create another folder or add a new curriculum

The first page of the New Curriculum wizard lets you enter details, such as descriptive summary information and start and end dates, about the curriculum. (You must enter the curriculum name, but all other fields are optional.) The information that you enter in the wizard appears later on the Curriculum Information page, as well as on the page that enrollee access from their My Training link.

The Custom URL box displays the first part of the URL that users click to access the curriculum. You can leave the box blank to have Adobe Connect generate a system URL or enter a custom URL in the box. For example, you can enter a word that describes the curriculum. 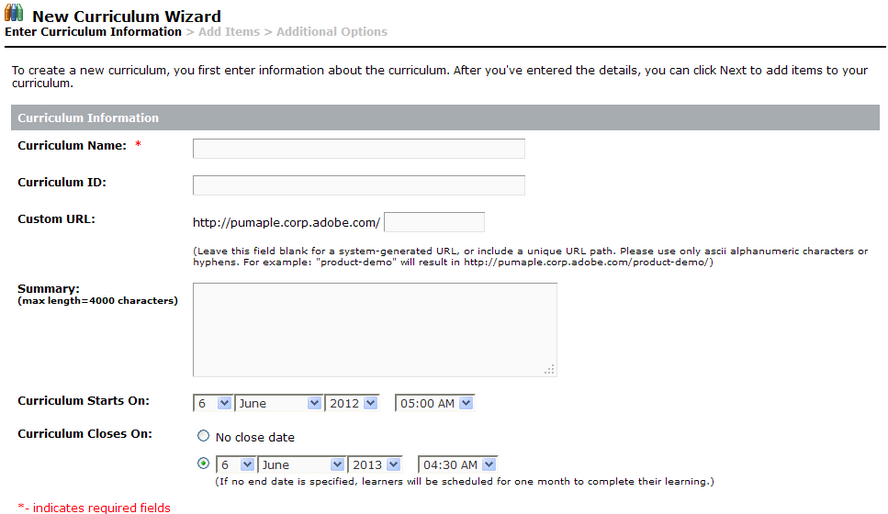 Use the Curriculum Information page to add a name and details about a curriculum.

Add items to the curriculum

After you enter curriculum information in the New Curriculum wizard and click Next, a page appears that lets you add items to the curriculum. When you add an item to a curriculum, you are actually adding a link to the item, not copying the item in a new location within Adobe Connect.

After creating a curriculum, add courses to build the curriculum.

If you want to group items in folders, do not add the items using the New Curriculum wizard. Instead, exit from the wizard, open the curriculum information page for the curriculum, click Add Item, click New Folder, type in a folder name, click Save, select the new folder (you can also select the root folder or a different folder), click Add Item, and then add items to the folder. New items are always created at the root level and you can rearrange items by clicking the Move button. Folders cannot be nested in other folders.

Change the order or remove items, if necessary

After adding content and courses, you can change the order of items to alter the learning path. You also have the option to remove any items.

Although you can move items within a folder, you cannot move items in or out of folders.

The final step when creating a curriculum is to select any options you require from the Additional Options page, such as adding enrollee, setting prerequisites, and sending notification.

After you create a curriculum, you can view and modify curriculum details on the Curriculum Information page.

Add and delete items from a curriculum

Here are a few tips:

Add folders and items to a curriculum

After creating a curriculum, you can add folders or items to the curriculum at any time.

Adding or removing items from a curriculum can affect learner transcripts. As a best practice, do not change curriculums once you have enrolled learners. If you do add or remove items, tell learners about the changes to the curriculum and ask them to log in to the curriculum to update their status.

After you create a curriculum, you can group items in folders to organize your items. For example, you can group a set of items in a Beginner Topics folder and another set in an Intermediate Topics folder. New folders are always added at the root level. Folders cannot be nested in other folders.

You add items to a curriculum folder rather than move items already in your curriculum into a folder.

Any courses available in your Training library are available for you to include in a curriculum.

A curriculum is not limited to Adobe Connect items. You can include external training. For example, you can add a classroom lecture that enrollee should attend. Since a lecture is a live event, you can create an external event to represent the lecture. By using the status override feature, you can then mark the enrollee that attend as “Complete.”

You can edit information in a curriculum, such as changing the order of items or removing items. You can also delete any entire curriculum

Note: Adding items to or removing them from a curriculum can affect learner transcripts. As a best practice, do not change curriculums once you have enrolled learners. If you do add or remove items, tell learners about the changes to the curriculum and ask them to log in to the curriculum to update their status.

To edit external content information, you must have already added it to the curriculum.

If you no longer want to include an item in a curriculum, you can remove it without affecting the original item that exists in its respective library.

The reminders feature, similar to the notification feature, lets you send email messages to enrollee. The primary difference between notifications and reminders, however, is that the Reminders page lets you send the messages at specified intervals. The message can go to all enrollee, or to a subset of enrollee.

Note: For users who must adhere to compliance standards, reminders can be set to annually. For more information, see Working with compliance and control settings.

Before you delete a curriculum, be aware of the following effects of this action:

Deleting a curriculum from the Training library does not affect the library items that constitute the curriculum.

After creating a curriculum, you can make many changes such as assigning prerequisites, assigning test-outs, and editing completion requirements. Adobe recommends using either test-outs or prerequisites, but not both, to create learning paths. Using both is possible, but it can be time-consuming and complicated to test all of the possible workflows learners may encounter.

Assigning prerequisites enforces learner access to items in a specific sequence. A folder cannot be set as a prerequisite. Also, do not set external training items as Required, as Adobe Connect cannot automatically track external items.

Avoid creating redundant prerequisites; they are confusing for learners and may cause performance issues on your Adobe Connect server.

You can design the curriculum so that enrollee are not required to take an item if they pass a related test-out item. Folders cannot be configured as test-out items or linked as selected items. Always use a specific course or meeting, not a folder, as a test-out or selected item for any other learning object.

Here are tips for creating test-outs:

You can designate an item as required, which specifies that an enrollee must successfully complete the item to complete the curriculum. By default, all items are required, but you can set individual items as optional or required without impacting other items.

Adobe Connect Central allows you to view and add enrollee to a curriculum, as well as set access permissions for enrollee.

After adding enrollee, send notification to the enrollee that the curriculum is available.

Duplicate entries in the CSV or TXT file are successfully imported at the first instance. The duplicate instances are ignored and reported after the import.

After you’ve added enrollee to a curriculum, you can determine permissions for enrolled users and groups.

You can remove an individual curriculum enrollee or a group of enrollee at any time.