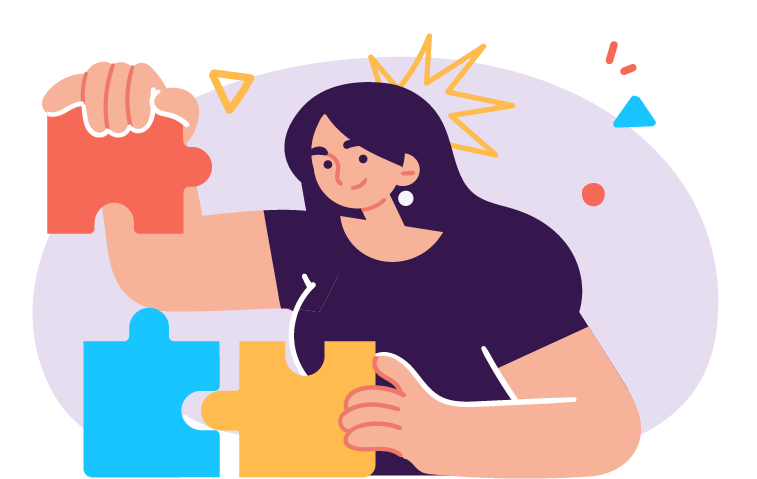 This behavior lets different parts of a puppet or different puppets connect to each other as they get close. Use it for picking up and dropping objects, like a cup of coffee that you want your character to grab.

Controls how connected objects are oriented with each other ‐ Weld retains the original orientation at the time the attachment was made, whereas Hinge allows the attached object to pivot. If you are using multiple Magnets behaviors (for example, you're connecting between puppets), and they use different attach styles, the connection to be used is Hinge.

Controls how strong the connection is between attached objects, with lower values allowing the objects to move more freely than at higher values. A strength of 0 will not attract other Magnet-tagged handles, and also breaks any current connections.

Controls the maximum distance (in pixels) that nearby Magnet-tagged handles need to be from each other to form a connection.

controls if Collide-tagged groups containing Magnet-tagged handles can overlap but still collide with other groups that are not magnetized (checked), or always collide (unchecked). When unchecked, the groups will collide when their outlines meet. The Range value might need to be increased because the handles will not overlap before making a connection.

Watch this tutorial to know when, how, and why use this behavior.

Motion Lines: Draw lines behind a fast-moving object to accentuate its movement

This behavior draws lines along the motion path of and behind an object to convey fast movement. Also known as speed lines, they can accentuate how parts of a puppet move over time and can add flourish to an animation. You can define any number of motion lines, with each optionally having a pair of secondary lines.

As the puppet moves, handles tagged with Motion Lines will have lines drawn from them based on their speed. The behavior has the following parameters:

Particles behavior creates multiple instances of a puppet and treats them as particles within a simulation (for example, spewing as if fired from a cannon, or falling like snowflakes). This behavior isn't applied by default to puppets. Add it first to see its effect on a puppet. You can also apply it to a group of puppets to have the group emitted as particles from the parent puppet.

Particles applied to a group render above all groups of a puppet. See Snowflakes.psd in the Character Animator Examples download for a working example that you can modify.

For the Snow mode, you might want to set Emitter Opacity to 0% or position the puppet off the edge of the scene (via the Transform behavior) so all you see are the falling particles.

In Point and Shoot mode, the pointer must be above the Scene panel for particles to fire.

Note: Unless you want particles to move along an arc, set Direction (of emitted particles) and Gravity Direction in asimilar orientation.

The Particles behavior can emit particles that are collidable  with other particles or other layers tagged
Collide.

Remove all existing particles in a scene

Select the puppet with particles and have it armed for record. Then Press D.

You can apply Physics at multiple group levels for finer control of stiffness, wind, and gravity settings.

Note: The Physics tag is ignored if you apply it to a puppet's origin handle, either manually in the Puppet panel or if the artwork had a layer with "dangle" in its name.

Note: Collisions occur only between independent groups of a single puppet, and between puppets that are in the same scene.

The existing Dangle settings for the Physics behavior has been enhanced with support for squash and stretch deformation, which preserves the overall volume (surface area) of a puppet as it deforms. For example, compressing the puppet's mesh causes the sides to bulge wider to retain the original surface area. Similarly, stretching the mesh vertically causes the middle to get narrower.

The Dangle tool in the Puppet panel can create Dangle-tagged handles without needing to modify the original artwork file.

Make sure that some parent puppets can be controlled by the Dragger, Face, or Transform behavior so that the dangling puppets can react to the motion.

Tip: Use Hinge attach style to allow the puppet to pivot smoothly around the attachment point.

Dangling still uses Dangle-tagged handles and the Dangle tool, but to operate collisions, tag the
layers as either Collide or Dynamic. These handle and layer tags are in the Tags > Physics section of the Properties panel.

Follow these steps to make an independent group dangle:

If the Collide or Dynamic tag is applied to a layer or non-independent group, it uses the mesh associated with the nearest parent-independent group in the puppet structure. Also, when setting up a hierarchy of groups for ragdoll movement, change the Attach Style for the groups to Hinge to make each group pivot as expected. When the Dynamic tag is assigned to a group that contains Dangle handles, the group will not move rigidly but can still dangle.

The Physics behavior has gravity controls that affect both dangling groups and colliding layers, and parameters specific to dangling and colliding actions. You can control them using the following parameters:

Gravity Strength: controls the amount of force or pull of gravity.

Gravity Direction : controls the orientation of gravity. For example, you can rotate gravity 180° to point upward, and either increase Gravity Strength or match Wind Direction to the same orientation to have dangled hair float upward.

Bounce Off Scene Sides controls if emitted particles bounce when hitting any side of the scene.

Bounciness controls how much particles bounce. If lowered to 0% and Bounce Off Scene Sides is checked, they'll slide along the edges.

Wind Strength controls the influence of the simulated wind on the Dangle handles.

Wind Variation controls the randomness of wind direction and strength. Increase this value to make the wind feel more alive.

The Dangle behavior supports squash and stretch deformation, which preserves the overall volume (surface area) of a puppet as it deforms. For example, compressing the puppet's mesh causes the sides to bulge wider to retain the original surface area. Similarly, stretching the mesh vertically causes the middle to get narrower.

Apply the Dangle tag to at least one handle in the mesh.