Use and create swatches

Swatches are named colors, tints, gradients, and patterns. The swatches associated with a document appear in the Swatches panel. Swatches can appear individually or in groups.

You can open libraries of swatches from other Illustrator documents and various color systems. Swatch libraries appear in separate panels and are not saved with the document.

The Swatches panel and swatch library panels can contain the following types of swatches:

A global color is automatically updated throughout your artwork when you edit it. All spot colors are global; however, process colors can be either global or local. You can identify global color swatches by the global color icon

A spot color is a premixed ink that is used instead of, or in addition to, CMYK process inks. You can identify spot-color swatches by the spot-color icon

A gradient is a graduated blend between two or more colors or tints of the same color or different colors. Gradient colors can be assigned as CMYK process colors, RGB colors, or a spot color. Transparency applied to a gradient stop, is preserved when the gradient is saved as a gradient swatch. The aspect-ratio and angle values of elliptical gradients (those created by adjusting the aspect ratio or angle of a radial gradient) are not saved.

The None swatch removes the stroke or fill from an object. You can’t edit or remove this swatch.

is a built‑in swatch that causes objects filled or stroked with it to print on every separation from a PostScript printer. For example, registration marks use the Registration color so that printing plates can be aligned precisely on a press. You can’t remove this swatch.

note: If you use the Registration color for type, and then you separate the file and print it, the type may not register properly and the black ink may appear muddy. To avoid this, use black ink for type.

Color groups can contain process, spot, and global process colors. They cannot contain pattern, gradient, none, or registration swatches. You create color groups based on harmonies by using either the Color Guide panel or the Edit Colors/Recolor Artwork dialog box. To put existing swatches into a color group, select the swatches and click the New Color Group icon

in the Swatches panel. You can identify a color group by the folder icon

You can also create tints in the Swatches panel. A tint is a global process color or spot color with a modified intensity. Tints of the same color are linked together, so that if you edit the color of a tint swatch, all associated tint swatches (and the objects painted with those swatches) change color, though the tint values remain unchanged. Tints are identified by a percentage (when the Swatches panel is in list view)

You use the Swatches panel (Window > Swatches) to control all document colors, gradients, and patterns. You can name and store any of these items for instant access. When a selected object’s fill or stroke contains a color, gradient, pattern, or tint applied from the Swatches panel, the applied swatch is highlighted in the Swatches panel. 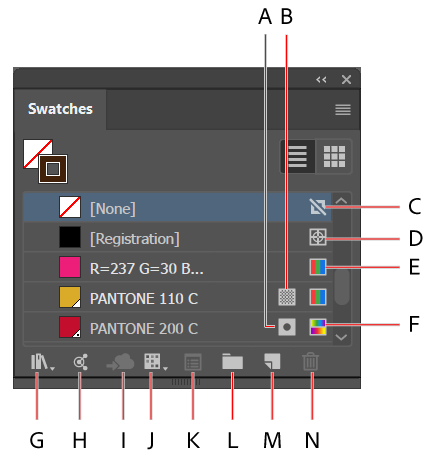 If you want to limit your Swatches panel to only the colors that are used in a document, you can select all unused swatches and then delete them.

To edit the selected color group, make sure no artwork is selected and click the Edit Color Group button

, or double-click the color group folder. To edit the selected color group and apply the edits to selected artwork, click the Edit Or Apply Colors button

You can reorder individual swatches as well as swatches inside a color group.

Do any of the following:

Add colors from artwork to the Swatches panel

When you automatically add colors to the Swatches panel, all colors in the document are included, except the following:

If you change a gradient fill, pattern fill, or symbol instance to a new global color, the color is added as a new swatch and the original color swatch is retained.

Import swatches from another document

You can import all swatches or individual swatches from another document.

You can share the solid swatches you create in Photoshop, Illustrator, and InDesign by saving a swatch library for exchange. The colors appear the same across apps as long as your color settings are synchronized.

You can manage the swatches in your Swatches panel by duplicating, grouping, replacing, merging, or deleting them. You can also specify swatch options such as swatch name, color type, color mode, or preview.

Specifies the name of the swatch in the Swatches panel.

Specifies if the swatch is a process color or spot color.

Specifies the color mode of the swatch.

After you select the color mode you want, you can use the color sliders to adjust the color. If you select a color that is not web-safe, an alert cube

appears. Click the cube to shift to the closest web-safe color (which is displayed to the right of the cube). If you select an out-of-gamut color, an alert triangle

appears. Click the triangle to shift to the closest CMYK equivalent (which is displayed to the right of the triangle).

Displays color adjustments on any objects to which the swatch is applied.