Working with Adobe Premiere Pro and After Effects

Adobe Animate is a tool for incorporating video footage into presentations for the web and mobile devices. Adobe Animate offers technological and creative benefits that let you fuse video with data, graphics, sound, and interactive control. The FLV formats let you put video on a web page in a format that almost anyone can view.

If you export video files in other standard formats, Adobe Animate can encode your videos within rich media applications. Adobe Animate uses the latest compression technologies to deliver the greatest quality possible at small file sizes.

Working with Animate and After Effects

Importing and publishing video in Animate

When you import an FLV file into Animate, you can use various techniques, such as scripting or Animate components, to control the visual interface that surrounds your video. For example, you may include playback controls or other graphics. You can also add graphic layers on top of the FLV file for composite results.

Animate and After Effects each include many capabilities that allow you to perform complex compositing of video and graphics. Which application you choose to use will depend on your personal preferences and the type of final output you want to create.

Animate is the more web-oriented of the two applications, with its small final file size. Animate also allows for runtime control of animation. After Effects is oriented toward video and film production, provides a wide range of visual effects, and is used to create video files as final output.

Both applications can be used to create original graphics and animation. Both use a timeline and offer scripting capabilities for controlling animation programmatically. After Effects includes a larger set of effects, while the Animate ActionScript® language is the more robust of the two scripting environments.

Both applications allow you to place graphics on separate layers for compositing. These layers can be turned on and off as needed. Both also allow you to apply effects to the contents of individual layers.

In Animate, composites do not affect the video content directly; they affect only the appearance of the video during playback in Flash Player. In contrast, when you composite with imported video in After Effects, the video file you export actually incorporates the composited graphics and effects.

Because all drawing and painting in After Effects is done on layers separate from any imported video, it is always non-destructive. Animate has both destructive and nondestructive drawing modes.

Importing SWF files into After Effects

Animate has a unique set of vector art tools that make it useful for a variety of drawing tasks not possible in After Effects or Adobe® Illustrator®. You can import SWF files into After Effects to composite them with other video or render them as video with additional creative effects. Interactive content and scripted animation are not retained. Animation defined by keyframes is retained.

Each SWF file imported into After Effects is flattened into a single continuously rasterized layer, with its alpha channel preserved. Continuous rasterization means that graphics stay sharp as they are scaled up. This import method allows you to use the root layer or object of your SWF files as a smoothly rendered element in After Effects, allowing the best capabilities of each tool to work together.

While specifying publish settings for .swf files, you have an option to generate a compatible SWF that can take camera effects, layer depth and parenting to After Effects. Select the Optimize for After Effects option in Publish Settings dialog. Also, this option is enabled by default when FLA is dragged drop into After Effects to preserve the advanced layers feature as it is in After Effects. 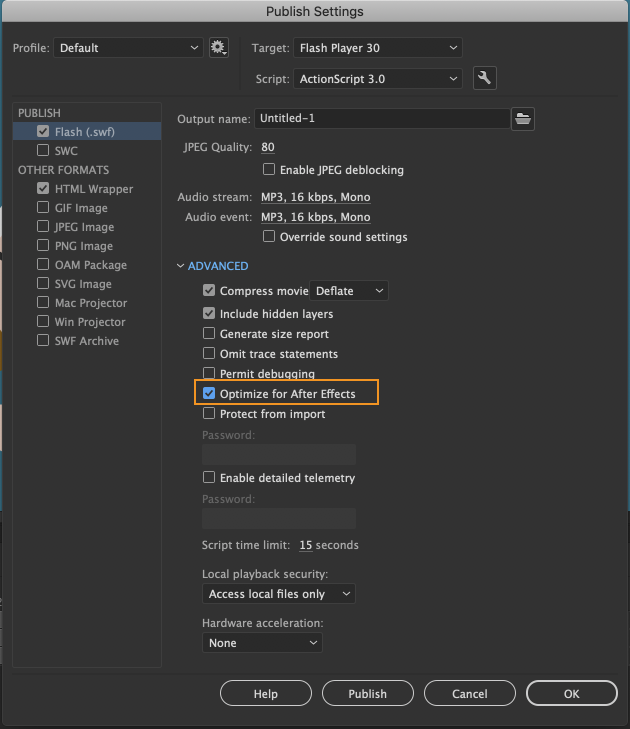 Now, you can import Animate FLA files into After Effects to composite them with a video or render them as video with additional creative effects. After Effects can interact with Animate using the plug-in.

Animate and After Effects workflow