When a project is created in Premiere Pro, you set the frame and pixel aspect. Once these ratios are set, you cannot change them for that project. However, you can change the aspect ratio of a sequence. You can also use assets created with different aspect ratios in the project.

It is the standard aspect ratio commonly shared by online videos, documentaries, and films. It captures a large amount of data with details.

It is the video recorded on your phone.

It is the aspect ratio that was used on television before widescreen was used. It focused on a particular element at a time.

It is a perfect square ratio that is commonly used on Instagram.

It is a wide widescreen often used in movies. It is similar to 16:9 but the top and bottom are cropped. This effect gives it a cinematic feel.

To set the aspect ratio of a sequence:

The aspect ratio for the sequence has been set.

In Premiere Pro, you can implement the letterboxing or the pan and scan technique by using Motion effect properties such as Position and Scale.

When you import clips shot in one frame aspect ratio into a project that uses another frame aspect ratio, you decide how to reconcile the different values. This placement leaves black bands above and below the movie frame, called letterboxing.

For example, two common techniques are used for showing a 16:9 movie on a 4:3 standard television. You can fit the entire width of the 16:9 movie frame within the 4:3 television frame.

Pan and scan is an alternative method to use a project with another frame aspect ratio. Only a part of the frame is retained, while the rest is lost. 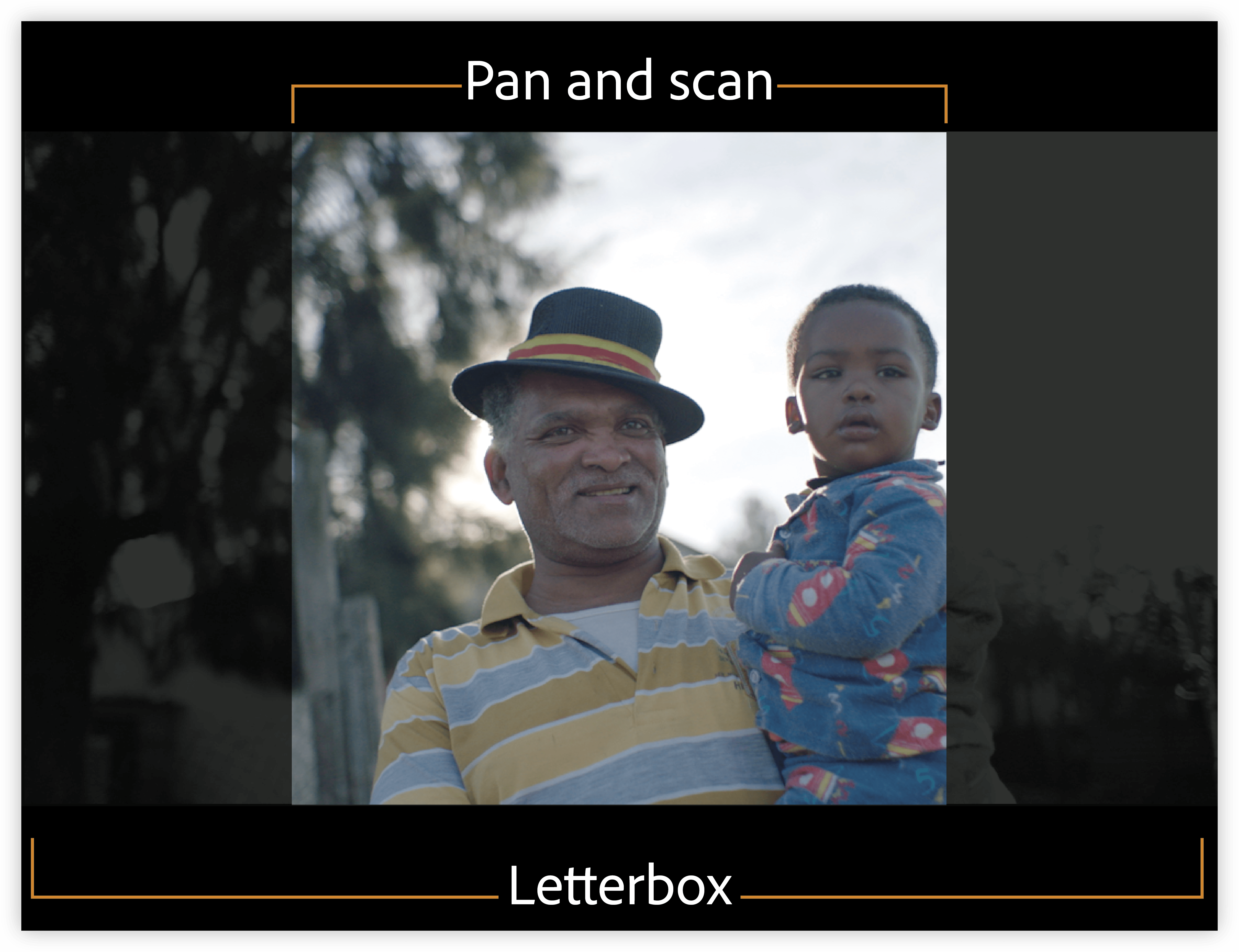 Letterboxing and pan and scan

If you display rectangular pixels on a square-pixel monitor without alteration, images appear distorted. For example, circles distort into ovals. However, when displayed on a broadcast monitor, the images appear correctly proportioned because broadcast monitors use rectangular pixels. Premiere Pro can display and output clips of various pixel aspect ratios without distortion. Premiere Pro attempts to automatically reconcile them with the pixel aspect ratio of your project.

Use assets with various aspect ratios

When an asset is imported, Premiere Pro attempts to preserve the frame aspect ratio, pixel aspect ratio, and frame dimensions so the asset does not appear cropped or distorted.

For assets that contain metadata, these calculations are automatic and precise. For example:

It is always important to interpreted files correctly. You can read asset frame dimensions and pixel aspect ratio near the preview thumbnail and in the Video Info column of the Project panel. You can also find this data in the asset Properties dialog box, the Interpret Footage dialog box, and the Info panel.

For example, if a square-pixel asset generated by a graphic looks distorted in Premiere Pro, you can correct its pixel aspect ratio to make it look right. By ensuring that all files are interpreted correctly, you can combine footage with different ratios in the same project. Then you can generate output that doesn’t distort the resulting images.

To correct individual aspect ratio interpretation, do the following:

Premiere Pro automatically assigns pixel aspect ratios to files according to a file of rules. If a specific type of image is consistently misinterpreted (distorted) when you import it, you can change the relevant rule.