About trimming and retrieving clips 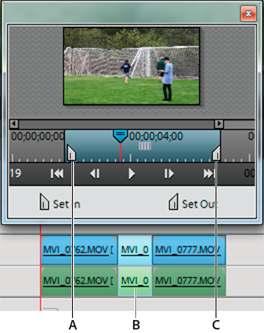 In and Out points serve as a window over a clip

A. In point  B. Trimmed frames C. Out point

You can create a refined good-quality video file by removing unwanted sections. Adobe Premiere Elements enables you to efficiently handle blurred, shaky, and unwanted low-quality sections of your video file. You can easily and quickly edit and fine-tune the video files.

Smart trimming enables you to trim the low-quality sections of a video file. Smart trim can be done manually and automatically. You can trim clips from the Quick view timeline or the Expert view timeline.

Trim a clip from the Quick view timeline

You can directly trim clips in the Quick view timeline.

Trim in the Expert view timeline

You can remove or regain trimmed frames from either end of a clip by dragging the clip’s edge in the Expert view timeline. To help you locate the desired frame, the Monitor panel displays it at the changing In or Out point of the clip as you drag. If another clip is adjacent to the edge you’re trimming, the Monitor panel displays the frames of both clips side by side.

The frame on the left (the Out point) is earlier in time, and the frame on the right (the In point) is later in time. Subsequent clips, as well as blocks of empty space, in the Expert view timeline shift as you drag the clip’s edge.

A tool tip displays the number of frames you are trimming as you trim them. This window displays a negative value if you drag the clip’s edge toward the beginning of the movie.

It displays a positive number if you drag toward the end of the movie. You can tell whether you have trimmed a clip by looking for a small gray triangle in the top corner at either end of the clip in the Expert view timeline. The triangle indicates you have not trimmed that edge.

For linked clips (video that includes a soundtrack), dragging the edge of one clip changes the In or Out points of both clips. Sometimes you want to trim linked clips independently to create split edits (also known as L‑cuts and J‑cuts). Pressing Alt when you trim allows you to set the In and Out points of the video and audio separately.

You can retain content at the beginning and end of a clip for your movie and remove content from its middle. Split the clip before the unwanted section begins, and then trim the unwanted material from the beginning of the second clip resulting from the split.

The audio can begin before the video or extend it after the video into the next clip (or vice versa). Trimming linked audio and video separately is called a split edit. Usually, when you create a split edit in one clip, you must create one in the adjacent clip so they don’t overlap each other.

You can create two kinds of split edits:

Trim in the Preview window 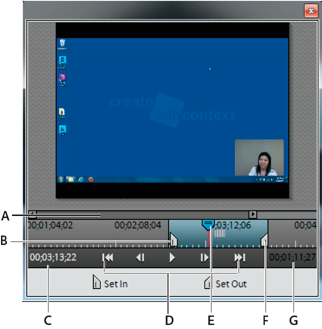 Once a clip is in a movie, you can reopen it in the Preview window to change its In and Out points for subsequent instances. You can either regain frames previously trimmed or trim additional frames.

Subsequent clip instances you drag to the Expert view timeline assume the In and Out points of the trimmed clip.