Type in Adobe Photoshop consists of vector-based type outlines—mathematically defined shapes that describe the letters, numbers, and symbols of a typeface. Many typefaces are available in more than one format, the most common formats being Type 1 (also called PostScript fonts), TrueType, OpenType, New CID, and CID nonprotected (Japanese only).

Photoshop preserves vector-based type outlines and uses them when you scale or resize type, save a PDF or EPS file, or print the image to a PostScript printer. As a result, it’s possible to produce type with crisp, resolution-independent edges.

If you import bitmap type layers created in older versions of Photoshop or Photoshop Elements, choose Type > Update All Text Layers to convert to vector type.

Type layers aren’t created for images in Multichannel, Bitmap, or Indexed Color mode, because these modes don’t support layers. In these modes, type appears on the background as rasterized text.

When you create type, a new type layer is added to the Layers panel. After you create a type layer, you can edit the type and apply layer commands to it.

Once you make a change to a type layer that requires it to be rasterized, however, Photoshop converts the vector-based type outlines to pixels. Rasterized type no longer has vector outlines and is uneditable as type. See Rasterize type layers.

You can make the following changes to a type layer and still edit the type:

There are three ways to create type: at a point, inside a paragraph, and along a path. 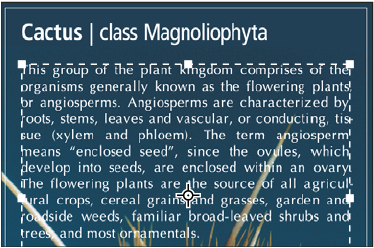 and the Cancel button

, the type tool is in edit mode.

When you enter point type, each line of type is independent—the line expands or shrinks as you edit it, but it doesn’t wrap to the next line. The type you enter appears in a new type layer.

When you enter paragraph type, the lines of type wrap to fit the dimensions of the bounding box. You can enter multiple paragraphs and select a paragraph justification option.

The type you enter appears in a new type layer.