Third-party effects in this category included with After Effects:

The 3D Channel effects work on 2D layers—specifically, 2D layers with 3D information in auxiliary channels. The sources of these 2D layers are image sequences that represent 3D scenes that have been rendered out of a 3D application.

3D Channel effects read and manipulate the additional channels of information, including z-depth, surface normals, object ID, texture coordinates, background color, unclamped RGB, and material ID. You can layer 3D elements along the z-axis, insert other elements in a 3D scene, blur areas in a 3D scene, isolate 3D elements, apply a foggy effect with depth, and extract 3D channel information for use as parameters in other effects.

If you convert a layer with a 3D Channel effect to 3D and view the layer from anywhere but the front and center, it doesn’t appear as expected.

To display depth and other channel values for a pixel in the Info panel, apply a 3D Channel effect, and then—with the effect selected—click the pixel in the Composition panel or Layer panel using the Selection tool.

Lutz Albrecht provides a two-part document on the Adobe website about integrating 3D applications with After Effects. These articles cover the creation of UV maps, mattes, and channels from various 3D applications, including Maxon Cinema 4D, NewTek Lightwave, and Luxology modo. The articles then show you how to use RE:Vision Effects RE:Map and fnord ProEXR plug-ins to use that data in After Effects.

3D Channel effects can use the channels in OpenEXR files—such as a depth channel—if the channels have been tagged. Unlike some other formats, like RPF, in which a specific set of channels is defined to always represent specific properties of a scene, the OpenEXR format is an arbitrary collection of channels with no inherent meaning. The R, G, B, and A channels are reserved to represent red, green, blue, and alpha values, but other channels can be used for any other characteristics. To map channel names to the values of a specific type for use by other effects, you can use a file with the name OpenEXR_channel_map.txt. If this file is in the same folder as the OpenEXR format plug-in, the OpenEXR plug-in will use the information in this file to tag channels when it imports an OpenEXR file.

The ProEXR package from the fnord software website also includes the ProEXR Comp Creator plug-in. This plug-in can create a layer from each of the channels of an OpenEXR file. For example, the layers can represent the output from a set of render passes from a 3D application.

The EXtractoR and IDentifier plug-ins from fnord software are included with After Effects to provide access to multiple layers and channels of OpenEXR files.

Documentation for fnord ProEXR plug-ins is available in a PDF document on the fnord software website, which includes links to a sample multi-channel EXR file and an After Effects project that uses it. The instructions in the fnord document regarding the removal of the OpenEXR plug-ins don’t apply to After Effects CS5.

The 3D Channel Extract effect makes auxiliary channels visible as either grayscale or multichannel color images. You can then use the resulting layer as a control layer for other effects. For example, extract the depth information in a 3D channel image file and then use it as an influence map in the Particle Playground effect, or extract values from the unclamped RGB channel to produce a matte that generates glowing highlights.

To display 3D channel values for a pixel in the Info panel, apply the 3D Channel Extract effect, choose the channel from the 3D Channel menu in the Effect Controls panel, and then click the pixel in the Composition panel or Layer panel using the Selection tool.

This effect works with 8-bpc and 32-bpc color.

The value that is mapped to white or black.

The channel to extract from the 3D image:

Represents the distance of a given shaded pixel from the camera. White represents the greatest distance; black pixels are closest to the camera. Effects such as the Lens Blur effect can use this information to generate depth-of-field effects. When you apply the channel directly as a luma matte, you get fog.

For best results, match the White Point and Black Point settings of the effect with the near and far settings of your camera in the 3D application that generated the 3D image.

The Anti-alias parameter allows you to choose whether the output of the effect is anti-aliased or not. Anti-aliased depth passes are useful to smooth the edges of mattes used for depth compositing or color correction.

Disable this option when you use Depth of Field or other effects where it is important that objects and their edges are considered to be at the same distance. Anti-aliased edges affect the gray values of the edge pixels, which can affect the apparent depth of the edge and cause artifacts in the effect using the matte.

Clamp Output Available in 32-bpc color mode only, clamps the grayscale output of the effect to values between 0 and 1.0. On by default.

Invert Depth Map inverts the grayscale output of the effect.

Each object can be assigned a separate ID value in the 3D application. You can use a map generated using this channel to selectively apply effects to certain objects in a 3D scene—for example, to apply selective color adjustments. This channel is not anti-aliased.

This channel contains the mapping coordinates of the textures of your object, mapped to the red and green channels. This channel is not anti-aliased.

This channel can be used to check your UV maps or as input for the Displacement Map effect.

This channel maps the direction vector of each point on the surface of an object to the RGB channels. The vectors are relative to the camera. Third-party plug-ins can use this channel as the basis for dynamic relighting and relief rendering. This channel is anti-aliased.

The behavior for this channel varies for various 3D applications. It is used to mark areas near the edges and contours of objects to provide information about their anti-aliasing and overlap behavior.

This channel contains all RGB pixel values of the background without any foreground objects. It is mostly used to store dynamic environmental effects unique to 3D programs such as skies or backgrounds generated from procedural textures. This channel is anti-aliased.

Each material can be assigned a separate ID value in the 3D application. You can use a map generated using this channel to selectively apply effects to certain materials in a 3D scene. This channel is not anti-aliased.

The Depth Matte effect reads the depth information in a 3D image and slices the image anywhere along the z-axis. For example, you can remove a background in a 3D scene, or you can insert objects into a 3D scene. 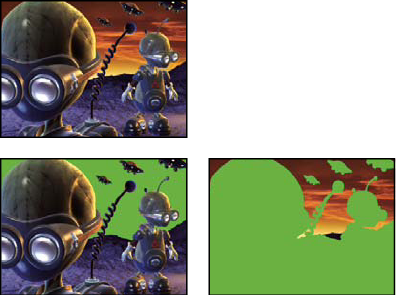 The z-axis value at which to slice the image. Everything with a depth value less than this Depth value is matted out.

To determine the depth of an object, click it in the Composition panel or Layer panel using the Selection tool while the effect is selected.

The amount of feather along the edges of the matte.

The Depth Of Field effect simulates a camera that’s focusing at one depth (focal plane) in a 3D scene, blurring objects at other depths. This effect uses the depth information from the auxiliary channel of an imported file representing a 3D scene. To use the depth information that After Effects calculates for a camera layer, see Create a camera layer and change camera settings. 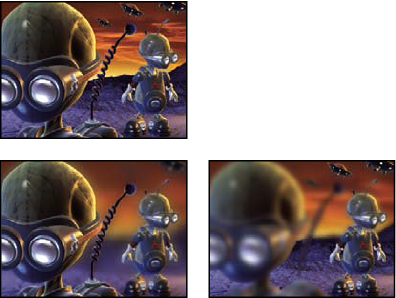 The distance along the z-axis of the focal plane from the camera.

To show the depth of an object in the Info panel, click the object in the Composition panel or Layer panel using the Selection tool while the effect is selected.

How much blur is applied to objects outside the focal plane.

Determines what depths are in focus on either side of the focal plane.

The higher the value, the more quickly elements drop out of focus with increasing distance from the focal plane.

Dave Scotland provides a video tutorial on the CG Swot website in which he shows how to use the Depth Of Field effect, even with a 3D file that has been rendered without optimal depth settings.

The Fog 3D effect simulates fog by behaving as though a scattering medium is in the air that makes objects look more diffuse as they get more distant along the z-axis. 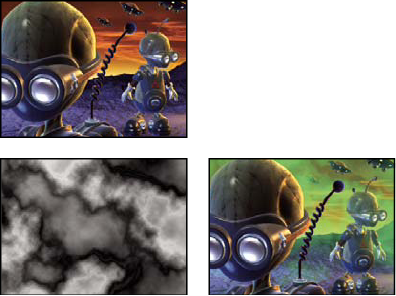 Where along the z-axis the diffuse scattering begins.

To determine the depth of an object, click it in the Composition panel or Layer panel using the Selection tool while the effect is selected.

Where along the z-axis the diffusion reaches its maximum.

Determines how quickly the scattering occurs. The higher the value, the more dense the fog appears from its starting point.

Creates a foggy background (default). Deselect to create transparency at the back of the 3D scene for compositing on top of another layer.

How much the gradient layer affects the fog density.

A depth pass is black and white information that correlates to distance. For example, if you have a scene that is filled with black fog and white objects, the objects that are farther away from the camera have a darker tone than the ones that are closer.

You can extract Z-depth by the 3D channel effects from a nested composition that contains 3D layers. You can use this to apply 3D depth effects to the composition layer, such as a depth of field blur, or to generate a matte for depth compositing or color correction.

Depth passes work with either the Classic 3D or CINEMA 4D composition renderers.

The following 3D channel effects can extract Z-depth from a nested 3D composition:

To extract a depth pass, from the Effects panel, apply the 3D Channel Extract effect to a nested composition layer.

You can use the EXtractoR effect to extract a depth pass from a nested composition, but anti-aliased edges against a transparent background can render with a fringe.

To view the edges, use the following steps:

Many 3D programs tag each element in a scene with a unique Object ID. The ID Matte effect uses this information to create a matte that excludes everything in the scene except the element you want. 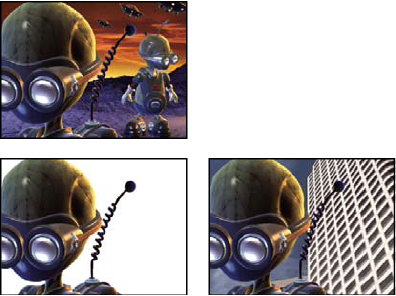 Original (upper-left), with ID Matte applied using the near alien as the ID Selection (lower-left), and composited over a new background (lower-right)

Isolate elements based on Object ID or Material ID.

The ID value for an object.

To determine the ID of an object, select the ID type from the Aux. Channel menu in the Effect Controls panel, and click the object in the Composition panel or Layer panel using the Selection tool while the effect is selected. If Object ID is selected for Aux. Channel, ID Selection automatically updates to the Object ID for the object you click.

The amount of feather along the edges of the matte.

Creates a cleaner matte by removing the colors stored behind the object from the pixels along the edge of the matte. This option works only if the 3D image contains a coverage channel that stores information about the colors behind objects.