You use the Levels adjustment to correct the tonal range and color balance of an image by adjusting intensity levels of image shadows, midtones, and highlights. The Levels histogram is a visual guide for adjusting the image key tones. For more information on how to read a histogram, see About histograms. 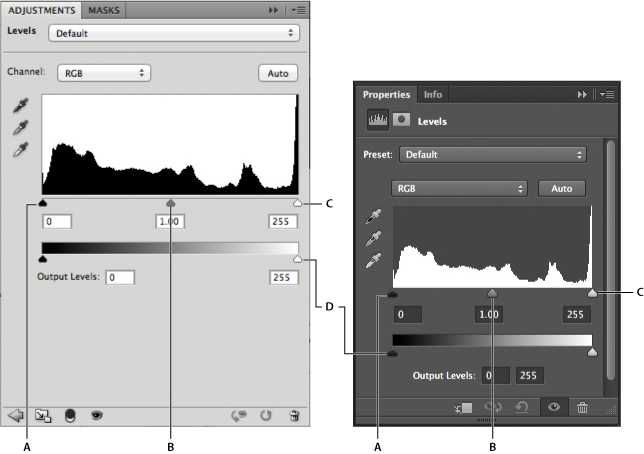 The outer two Input Levels sliders map the black point and white point to the settings of the Output sliders. By default, the Output sliders are at level 0, where the pixels are black, and level 255, where the pixels are white. With the Output sliders in the default positions, moving the black input slider maps the pixel value to level 0 and moving the white point slider maps the pixel value to level 255. The remaining levels are redistributed between levels 0 and 255. This redistribution increases the tonal range of the image, in effect increasing the overall contrast of the image.

The middle Input slider adjusts the gamma in the image. It moves the midtone (level 128) and changes the intensity values of the middle range of gray tones without dramatically altering the highlights and shadows.

Add contrast to a photo with Levels

If the image needs overall contrast because it doesn’t use the full tonal range, click the Levels icon

in the Adjustments panel. Then drag the Shadow and Highlight input sliders inward until they touch the ends of the histogram. 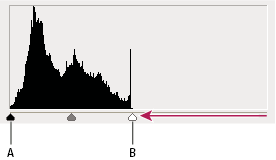 Image layer doesn’t extend to the ends of the graph, indicating that the image is not using the full tonal range.