The Paths panel (Window > Paths) lists the name and a thumbnail image of each saved path, the current work path, and the current vector mask. Turning thumbnails off can improve performance. To view a path, you must first select it in the Paths panel. 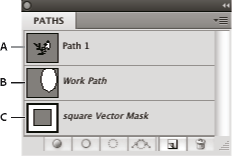 Choose Panel Options from the Paths panel menu, and select a size, or select None to turn off the display of thumbnails.

Create a new path in the Paths panel

You can define the color and thickness of path lines to suit your taste and for easier visibility. While creating a path—using the Pen tool, for example—click the gear icon (

) in the Options bar. Now specify the color and thickness of path lines. Also, specify whether you want to preview path segments as you move the pointer between clicks (Rubber Band effect).

When you use a pen or shape tool to create a work path, the new path appears as the work path in the Paths panel. The work path is temporary; you must save it to avoid losing its contents. If you deselect the work path without saving it and start drawing again, a new path will replace the existing one.

Paths in formats other than those listed here generally don’t survive a transition from Mac OS to Windows and back to Mac OS.