To reproduce color and continuous-tone images, printers usually separate artwork into four plates (called process colors)—one plate for each of the cyan, magenta, yellow, and black portions of the image. You can also include custom inks (called spot colors). In this case, a separate plate is created for each spot color. When inked with the appropriate color and printed in register with one another, these colors combine to reproduce the original artwork.

The process of dividing the image into two or more colors is called color separating, and the film from which the plates are created are called the separations. 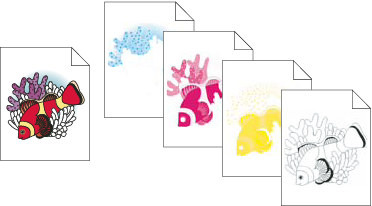 Composite image printed on a color laser printer compared to four-color separations printed on an imagesetter.

To produce high-quality separations, you should work closely with the print shop that will produce your separations, consulting its experts before beginning each job and during the process.

Before you print color separations from Illustrator, it’s a good idea to perform the following prepress tasks:

Use the Live Color dialog box to globally convert and reduce colors. For example, if you want to convert a process color document to a 2‑color spot document use the Assign portion of Live Color, and specify which colors you want and how they are assigned to existing colors.

You can preview color separations and using the Separations Preview panel.

Previewing separations on your monitor lets you preview spot color objects in your document, and check the following:

You can preview how blending, transparency, and overprinting will appear in color-separated output. You can also see overprinting effects when you output to a composite printing device.

While previewing separations on your monitor can help you detect problems without the expense of printing separations, it does not let you preview trapping, emulsion options, printer’s marks, and halftone screens and resolution. Work with your commercial printer to verify these settings using integral or overlay proofs. Setting inks to be visible or hidden on screen in the Separations Preview panel does not affect the actual separations process—it only affects how they appear on your screen during the preview.

Objects on hidden layers are not included in an on‑screen preview.

Illustrator supports two common PostScript workflows, or modes, for creating color separations. The main difference between the two is where separations are created—at the host computer (the system using Illustrator and the printer driver), or at the output device’s RIP (raster image processor).

In the traditional host-based, preseparated workflow, Illustrator creates PostScript data for each of the separations required for the document, and sends that information to the output device.

In the newer RIP‑based workflow, a new generation of PostScript RIPs perform color separations, trapping, and even color management at the RIP, leaving the host computer free to perform other tasks. This approach takes less time for Illustrator to generate the file, and minimizes the amount of data transmitted for any given print job. For example, instead of sending PostScript information for four or more pages to print host-based color separations, Illustrator sends the PostScript information for a single composite PostScript file for processing in the RIP.

Image exposure refers to whether artwork prints as a positive or negative image. Typically, print shops require negative film in the United States and positive film in Europe and Japan. If you are unsure about which image type to use, consult your print shop.

Print an object on all plates

If you want to print an object on all plates in the printing process, including spot-color plates, you can convert it to a registration color. Registration marks, trim marks, and page information are automatically assigned registration colors.