The Composition panel can show one, two, or four views at a time. By default, viewer options (such as grids and rulers) affect only the currently active view.

To activate a view without affecting the selection of layers in a composition, use the middle mouse button to click within the view’s pane in the Composition panel.

You can view your 3D layers from several angles, using orthographic views, custom views that employ perspective, or camera views.

You can adjust the point of view and direction of view for the custom views with the Camera tools, or you can look at selected layers or all layers. (See Adjust a 3D view or move a camera, light, or point of interest.)

Show or hide layer controls in the Composition panel

You can assign different options to each view in the Composition panel, so that you can see any combination of camera and light wireframes, layer handles, mask and shape paths, effect control points, and motion path controls.

Zoom an image for preview

For information on scaling a layer, not just zooming in or out of the preview image, see Scale or flip a layer.

After Effects renders vector objects before zooming (scaling for preview), so some vector objects may appear jagged when you zoom in on them. This apparent pixelation for zooms does not affect scaling of layers or rendering to final output.

To pan around in the Composition, Layer, or Footage panel while zoomed in, drag with the Hand tool, which you can activate by holding down the spacebar, the H key, or the middle mouse button. Hold Shift, too, to pan faster.

For additional ways to zoom and scroll using the mouse scroll wheel, see Scroll or zoom with the mouse wheel.

In the context of printing and other media with fixed linear dimensions, resolution refers to linear pixel density: the number of pixels or dots in a certain span, expressed in such terms as ppi (pixels per inch) and dpi (dots per inch).

Each composition has its own Resolution setting, which affects the image quality of the composition when it’s rendered for previews and final output. Rendering time and memory for each frame are roughly proportional to the number of pixels being rendered.

The Auto setting is ignored for compositions for which the Advanced composition setting Preserve Resolution When Nested is selected.

Renders each pixel in a composition. This setting gives the best image quality, but takes the longest to render.

Renders one-quarter of the pixels contained in the full-resolution image—half the columns and half the rows.

Renders one-ninth of the pixels contained in the full-resolution image.

Renders one-sixteenth of the pixels contained in the full-resolution image.

Renders the image at the horizontal and vertical resolutions that you specify.

The resolution (down-sample factor) of a Layer viewer is tied to the resolution of the Composition viewer for the composition in which the layer is contained.

You can view red, green, blue, and alpha channels—together or separately—in a Footage, Layer, or Composition panel by clicking the Show Channel button

at the bottom of the panel and choosing from the menu. When you view a single color channel, the image appears as a grayscale image, with the color value of each pixel mapped to a scale from black (0 value for the color) to white (maximum value for the color).

To see color values displayed in the channel’s own color instead of white, choose Colorize from the Show Channel menu.

When you preview the alpha channel, the image appears as a grayscale image, with the transparency value of each pixel mapped to a scale from black (completely transparent) to white (completely opaque).

When you choose RGB Straight, which shows straight RGB values before they are matted (premultiplied) with the alpha channel, pixels with complete transparency are undefined and therefore may contain unexpected colors.

You can view other channel values, such as saturation and hue, by applying the Channel Combiner effect and choosing Lightness from the To menu.

To switch between showing the alpha channel and showing all RGB channels, Alt-click (Windows) or Option-click (Mac OS) the Show Channel button.

Alpha Boundary and Alpha Overlay view modes are only available in the Layer panel, and they are intended for use with the Roto Brush effect. For information on these modes, see Layer panel view options.

You can adjust the exposure (in f-stop units) for previews with the Adjust Exposure control, which is located to the right of the Reset Exposure button

at the bottom of a Composition, Layer, or Footage panel. Each viewer can have its own Adjust Exposure setting.

When the Adjust Exposure control is set to a value other than zero, the Reset Exposure button is blue.

The Adjust Exposure control doesn’t affect final output, only how video appears during previews. To make tonal adjustments to a layer that appear in the final output, use the Exposure effect.

The Adjust Exposure control is useful for finding the black point or white point in an image. For example, drag the value control to the right (positive values) until the entire image is white except for one area; that area is the darkest area in the image.

To check the quality of a composite, drag the Adjust Exposure control far to the left and far to the right and look for places where the composited elements differ too much in color or luminance. This technique—sometimes called gamma slamming—is useful for ensuring that a composite will look good and be convincing in contexts other than the one in which you’re working. For example, a composite that is adequate in a dark scene may be less convincing when the scene is color-corrected to brighten the scene.

In the Footage, Layer, and Composition panels, you can display safe zone margins, grids, rulers, and guidelines to align and arrange visual elements. After Effects preserves guides when importing Photoshop files saved with guides.

Safe-zone margins, grids, and guides are not rendered, either for the preview options or for final output. 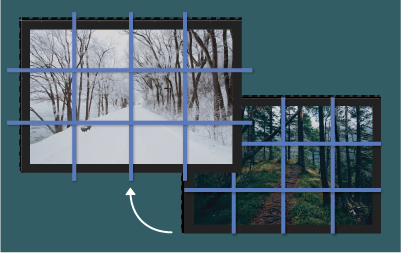 Export guides to other compositions and layers

After Effects enables you to save guide lines and import them into other ae comps, projects, and layers. You can also export these guides to Premiere Pro, where the editors can use them to maintain consistency in projects.

When you export guides, it creates a template file (.guides) that you can share or import into a different project, or a different composition, layer, or footage view in the same project. A guides template file contains JSON data that records the guide attributes. After Effects exports all guides in the current view. Importing guides adds the guides to the current view. It retains any existing guides in the view.

For more information, see Use rulers and guides in the Program Monitor.

Television sets enlarge a video image and allow some portion of its outer edges to be cut off by the edge of the screen. This kind of cropping is known as overscan. The amount of overscan is not consistent between television sets, so you should keep important parts of a video image within certain margins, in areas known as safe zones. Safe-zone margins represent the percentage of image dimensions not included in the safe zone. You should always design from one edge of the frame to the other, because computer monitors and some television sets may show the entire frame.

The conventional action-safe zone is 90% of the width and height of the frame, which corresponds to a margin of 5% on each side. Keep important visual elements within this zone.

The conventional title-safe zone is 80% of the width and height of the frame, which corresponds to a margin of 10% on each side. Keep text that you intend for the audience to read within this zone.

Compositions with a frame aspect ratio equal to or near 16:9 have two additional center-cut safe-zone indicators. The center-cut indicators show which parts of a 16:9 composition may be cut off when the image is shown on a 4:3 display. Such cropping is a concern when creating images for high-definition displays that may also be shown on standard-definition television sets. By default, the center-cut action-safe margin is 32.5% (16.25% on each side), and the center-cut title-safe margin is 40% (20% on each side).

The center-cut safe-zone margins are only shown if the frame aspect ratio for the composition is equal to or near 16:9. 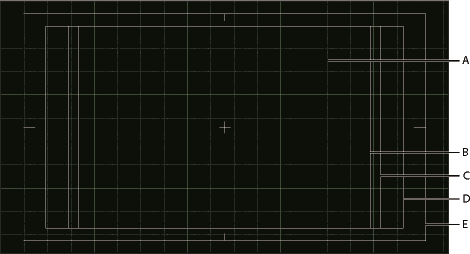 Safe zones and grids in the Composition panel

Aharon Rabinowitz provides a video tutorial in the Multimedia 101 series on the Creative COW website that explains safe zones.

Additional resources for viewing and previewing

When you want to view certain crucial frames in a composition—such as when showing them to a client for interim approval—you may want to create a contact sheet. Jeff Almasol provides a script that creates a contact sheet that consists of a grid of specific individual frames from a composition. You specify which frames to show by setting layer markers. For more information, go to Jeff Almasol's redefinery website.