When a background is not of a consistent and distinctive color, you can’t remove the background with keying effects. Under these conditions, you may need to use rotoscoping—the manual drawing or painting on individual frames to isolate a foreground object from its background. (See Rotoscoping introduction and resources.)

Keying makes it easy to replace a background, which is especially useful when you work with objects too complex to mask easily. When you place a keyed layer over another layer, the result forms a composite, in which the background is visible wherever the keyed layer is transparent.

You often see composites made with keying techniques in movies, for example, when an actor appears to dangle from a helicopter or float in outer space. To create this effect, the actor is filmed in an appropriate position against a solid-color background screen. The background color is then keyed out and the scene with the actor is composited over a new background.

The technique of keying out a background of a consistent color is often called bluescreening or greenscreening, although you don’t have to use a blue or green screen; you can use any solid color for a background. Red screens are often used for shooting non-human objects, such as miniature models of cars and space ships. Magenta screens have been used for keying work in some feature films renowned for their visual effects. Other common terms for this kind of keying are color keying and chroma keying.

For information on the Keylight effect, see its documentation in the folder in which the Keylight plug-in is installed, or on the Foundry website.

Though the color keying effects built into After Effects can be useful for some purposes, you should try keying with Keylight before attempting to use these built-in keying effects. Some keying effects—such as the Color Key effect and the Luma Key effect—have been superseded by more modern effects like Keylight.

The Key Cleaner and Advanced Spill Suppressor effects are most effective when applied together, in that order, after a keying effect like Keylight.

Mark Christiansen provides tips and techniques for using Keylight in an excerpt from his book After Effects Studio Techniques: Visual Effects and Compositing on the Peachpit Press website. In an excerpt from the “Color Keying in After Effects” chapter of After Effects Studio Techniques, Mark Christiansen provides detailed tips and techniques for color keying, including advice on which keying effects to avoid and how to overcome common keying challenges.

For a step-by-step tutorial demonstrating the use of the Color Difference Key effect, the Matte Choker effect, the Spill Suppressor effect, and garbage masks, see the “Keying in After Effects” chapter of the After Effects Classroom in a Book on the Peachpit Press website.

Rich Young collects more tips and resources for keying on his After Effects Portal website.

Keep in mind that generating a high-quality key can require the application of multiple keying effects in sequence and careful modification of their properties, especially if the footage was shot without considering the requirements of the compositor.

For tips on shooting footage so that color keying is easier and more successful, see Jonas Hummelstrand’s General Specialist website.

Robbie Carman and Richard Harrington provide an excerpt on the Peachpit website from their book Video Made On A Mac that demonstrates how to plan, shoot, key, and composite a greenscreen shot.

Use a garbage matte

A garbage matte (or junk matte) removes unneeded portions of the scene, resulting in a rough area that contains only the subject that you want to keep. When you are working with a poorly lit or uneven color screen (for example, a bluescreen or greenscreen), sketching a garbage matte around the subject can greatly reduce the amount of work that you have to do in keying out the background. However, if you spend a lot of time making a perfect garbage matte that exactly outlines the subject—essentially rotoscoping—you lose the time-saving advantage of keying.

Aharon Rabinowitz provides a video tutorial on the Creative COW website that shows how to create a super-tight garbage matte using Auto-trace.

Use a hold-out matte

Use a hold-out matte (also known as a hold-back matte) to patch a scene to which a keying effect has been applied. 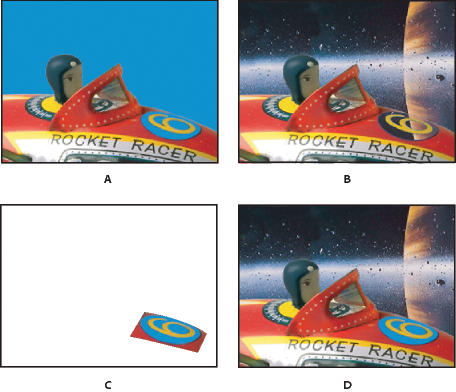 Example of using a hold-out matte