You animate mask paths and shape paths in much the same way that you animate other properties: set keyframes for the Mask Path or Path property, set paths at each keyframe, and After Effects will interpolate between these specified values.

Rotoscoping (or just roto in casual usage) is the drawing or painting on frames of a movie, using visual elements in the movie as a reference. A common kind of rotoscoping is tracing a path around an object in a movie and using that path as a mask to separate the object from its background. This allows you to work with the object and the background separately, so you can do things like apply different effects to the object than to its background or replace the background.

This video from the After Effects CS5: Learn By Video series shows how to combine motion tracking and rotoscoping to isolate and selectively color-correct an actor's face.

Scott Squires provides a pair of movies on his Effects Corner website that show how to rotoscope, both painting and masking:

Mathias Möhl provides the KeyTweak script on his website, with which you can modify many keyframes on a property simultaneously. With KeyTweak, you can modify a few keyframes manually, and the script modifies the remaining keyframes in between accordingly. KeyTweak is especially useful for Mask Path keyframes in a rotoscoping workflow.

Rich Young provides several resources for rotoscoping on his After Effects Portal website.

You can select shape layers and their components at any of four levels of selection, referred to as selection modes:

Multiple vertices on one or more Bezier paths are selected. A free-transform bounding box is shown around the vertices in the Composition panel. By operating on this box, you can move multiple vertices with a single transformation. Transformations apply to the vertices themselves, which are contained within the Path property in the Timeline panel.

Only vertices are selected. In this mode, you can perform path-editing operations, such as adding vertices to a path and moving individual vertices. 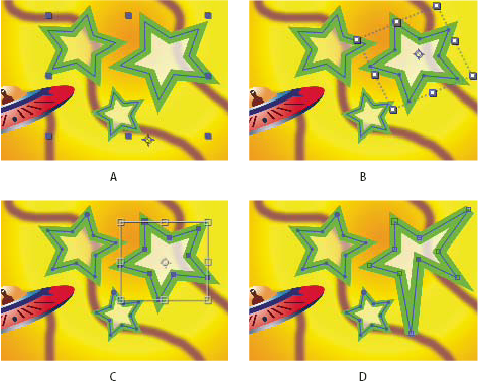 To use the Selection tool when the Pen tool is selected, hold down Ctrl (Windows) or Command (Mac OS).

You can select only whole masks in the Timeline panel. To select individual vertices on a mask, use the Composition or Layer panel.

Locking a mask prevents you from selecting it in the Timeline, Composition, and Layer panels or setting it as a target in the Layer panel. Use this feature to avoid unwanted changes to the mask.

To unlock multiple masks at one time, select one or more layers and choose Layer > Mask > Unlock All Masks.

When you animate rotation using Free Transform Points, the vertices of the mask are interpolated in a straight line from keyframe to keyframe. For this reason, the results may be different from what you expect.

Convert a path between manual Bezier and RotoBezier

You can convert any manual Bezier mask path or manual Bezier shape path to a RotoBezier path. If the manual Bezier path has direction handles that have been adjusted, this conversion changes the shape of the path, because After Effects calculates the curvature of RotoBezier segments automatically.

The conversion of a RotoBezier path to a manual Bezier path does not change the shape of the path.

When modifying a path, make sure that you click only existing vertices or segments; otherwise, you may create a new path instead.

Designate the first vertex for a Bezier path

Some shape path operations, such as Trim Paths, also use the first vertex as input to determine how to modify the path.

Move a mask or pan a layer behind a mask 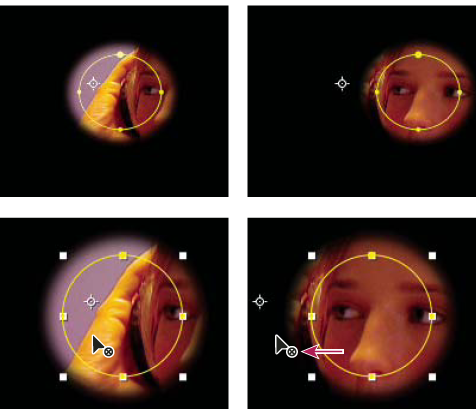 You can use the mask tracker to transform a mask so that it follows the motion of an object (or objects) in a movie. For more information, see Mask Tracking.

You can also use the mask tracker to accurately detect and track human faces. For more information, see Face Tracking.

You can use expressions to read and write the x and y coordinates of path points, or vertices for:

You can access the expression methods using the following steps:

Listed below are example expression methods of the following path objects:

Tips to work with these expression methods:

The panel creates nulls for each path point on a mask path or Bezier shape path. You can use the following buttons in the panel to direct how the nulls perform: