Work with frames and objects

Adobe InDesign objects include any item you can add or create in the document window, including open paths, closed paths, compound shapes and paths, type, rasterized artwork, 3D objects, and any placed file, such as an image.

If a graphic exists inside a frame (as all imported graphics do), you can modify it by changing its relationship to its frame, as in the following examples:

Paste an object into a frame

Background image pasted into a frame

An imported image cannot exist without a frame. If you cut an imported image from its frame and paste it elsewhere within a document, a new frame is created for it automatically.

If the frame and its content are different sizes, you can use the Fitting commands to achieve a perfect fit.

Frame alignment options apply to frames that contain either a graphic or another text frame (text frames nested within another frame), but they do not affect paragraphs inside a text frame—you control alignment and positioning of text itself using the Text Frame Options command and the Paragraph, Paragraph Styles, and Story panels.

You can select the Auto-Fit option in the Control bar and in the Frame Fitting Options dialog box.

You can associate a fitting option to a placeholder frame so that whenever new content is placed in that frame, the fitting command is applied.

The fitting action is applied only when content is placed into a frame. If you resize the frame, the fitting option is automatically reapplied only if Auto-Fit is selected.

The following techniques include ways to move a frame or its content independent of each other. These techniques are useful for adjusting a graphic when cropped or masked in its frame.

If a selection tool doesn’t work the way you expect it to, try deselecting everything first. Do this by pressing Ctrl+Shift+A (Windows) or Command+Shift+A (Mac OS).

Create a border or background

A graphics frame is ideally suited for use as a border or background for its content, because you can change the frame’s stroke and fill independent of the content.

A. Photo in graphics frame B. Frame with stroke applied C. Frame enlarged with both stroke and fill applied

You can quickly enlarge a frame equally around all sides by using the Transform or Control panel. Select the frame with the Direct Selection tool

to the center point, and enter new values for the width and height.

Cropping and masking are both terms that describe hiding part of an object. In general, the difference is that cropping uses a rectangle to trim the edges of an image, and masking uses an arbitrary shape to make an object’s background transparent. A common example of a mask is a clipping path, which is a mask made for a specific image.

Use graphics frames to crop or mask objects. Because an imported graphic is automatically contained within a frame, you can crop or mask it immediately without having to create a frame for it. If you haven’t created a frame for an imported graphic manually, the frame is automatically created at the same size as the graphic, so it is not obvious that the frame is there.

For efficient printing, only the data for the visible parts of cropped or masked images is sent when you output the document. However, you still save disk space and RAM if you crop or mask images to their desired shapes and sizes before importing them into your document.

With an imported graphic, you can also create a mask by using the drawing tools to change the shape of the graphic’s existing frame.

Object export options can be used to specify export parameters required when you export to different formats, such as EPUB, HTML, or accessible PDFs.

If an object is hyperlinked, it would be supported on export.

You can leave the Object Export Options dialog box while you select other objects on the layout to apply the settings.

Alternative text (Alt text) is a brief text-based description of an image or graphic. This text is used in situations where the image is not rendered or to help screen-readers.

Select the source to assign the Alt text for the selected frames or groups.

If text string is stored in some other XMP field, enter the complete namespace and property name in <ns>:<property> format. For example, the Adobe Bridge user interface supports IPTC Core, which contains a field titled “IPTC Subject Code”. If this field was used to store the text string, then the Property value would be “Iptc4xmpCore:SubjectCode[1].”

Select the source to assign the PDF Tag for the selected frames or groups.

Use text as specified in the structure.

Use for graphic elements that have no important meaning when they are read aloud by a screen reader.

Automatically determines the content of the frame and applies “Story” or “Figure” tag.

PDF also supports actual text, in addition to Alt text. Actual text can be applied to graphic elements that visually look like text. For example, a scanned TIFF image. Actual text is used to represent words that were converted to artwork. Actual text is only applicable for tagged PDFs.

If text string is stored in some other XMP field, enter the complete namespace and property name in <ns>:<property> format. For example, the Bridge user interface supports IPTC Core, which contains a field titled “IPTC Subject Code”. If this field was where the text string is stored, then the Property value would be “Iptc4xmpCore:SubjectCode[1].” 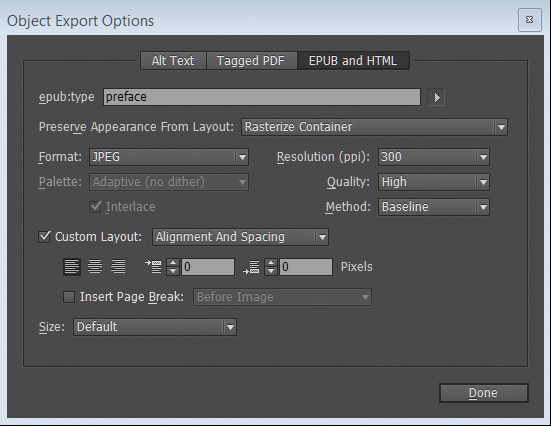 Click the arrow icon to choose the order in which the reader can read the document.

Use Existing Image for Graphic Objects

Convert the object into an image. For example, a text frame gets converted to an image.

The appearance is preserved via CSS.

Lets you choose whether the optimized images in your document are converted to GIF, JPEG, or PNG.

Specify the resolution of the images in pixels per inch (ppi). While operating systems have standardized on either 72 ppi or 96 ppi, mobile devices range from 132 ppi (iPad), to 172 ppi (Sony Reader), to over 300 ppi (iPhone 4). You can specify a ppi value for each object selected. Values include 72, 96, 150 (average for all eBook devices today), and 300.

Select Interlace to display a slowly loaded image gradually by filling in missing lines. If this option is not select, an image looks fuzzy and gradually becomes clear as the image reaches full resolution.

Determines the trade-off between compression (for smaller file sizes) and image quality for each JPEG image created. Low produces the smallest file and lowest image quality.

Determines how quickly JPEG graphics display when the file containing the image is opened on the web. Choose Progressive to make the JPEG images display gradually and in increasing detail as they are downloaded. (Files created with this option are slightly larger and require more RAM for viewing.) Choose Baseline to make each JPEG file display only after it has been downloaded; a placeholder appears in its place until the file displays.

Select this option to insert page breaks with images. Page breaks can be inserted Before Image, After Image, or Before and After Image.

Choose the custom CSS width and height from the following options: