Create Microcontent from the core pieces of your content, then use that Microcontent to promote the larger content.

Microcontent is a small, bite-sized snippet of self-contained information delivered through Chatbots, Microhelp, and FAQs.

In addition to topic-based authoring, RoboHelp gives you the ability to create a new microcontent or repurpose your existing content, such as a specific portion of a topic, for use as microcontent, that can be easily digested by Artificial Intelligence (AI) applications.

In RoboHelp, it begins with the creation of Microcontent group, collection of intent, and corresponding response, such as question and answer. In short, Microcontent means small content authored for a specific entity, "Intent." User will define an intent; for example, What is Browse Sequence?, and define its response as a rich text content. The response text can be either authored or can be created using an existing topic content. The intent/response combination can help to spark the curiosity of the user.

You can consider several types of content to be used as Microcontent, which is engaging, eye-catching and quick to take in. Having created Microcontent in RoboHelp, you can deploy it in a number of different ways for use within Chatbot,Search Snippet, FAQ, or Microhelp, and each one of them can be used in their own way to direct traffic to engage the audience.

Chatbot Create response that can be integrated with any chatbot engine. For more details, see Configure output preset for Chatbot.

Search Snippet Retrieve a concise response to the search query in all outputs on the homepage and topic page. For more details, see Add FAQ page to a Frameless output.

Microhelp Create small file (HTML, JSON, XML, Text) that developers can access in an app, with or without links to the main help. This is very small in size and sit standalone on a server. This output does not require any phrase or keyword. For more details, see Configure output preset for Microhelp. 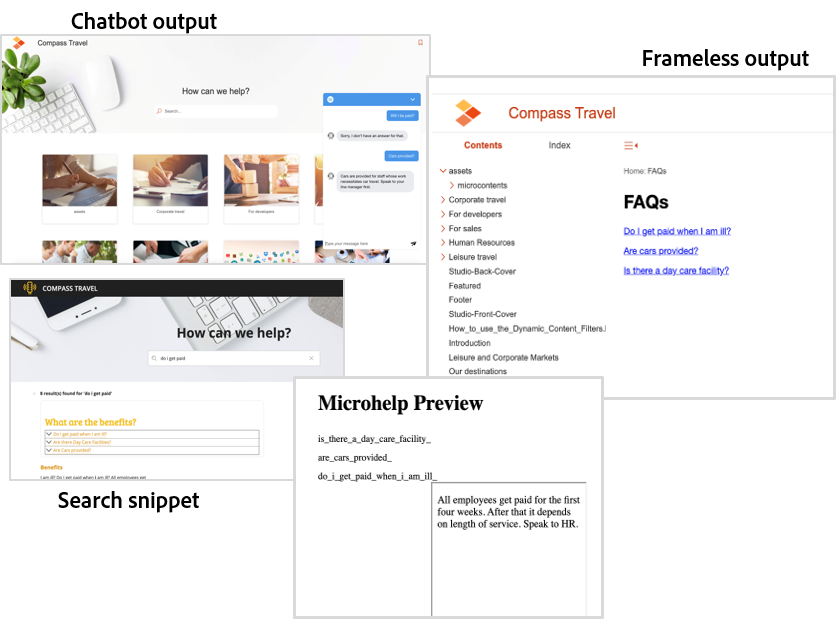 Let us understand this with an example:

basically, all the possible ways in which the question "how to make cappuccino" can be asked by the user.

Now, the intent described above can be used in the chatbot, can be enlisted as a FAQ, or as a search snippet in all outputs.

You can create multiple Microcontent groups to help organize your intents into different groups. To create a Microcontent Group, follow these steps:

Create intent and response in the Microcontent panel

The Microcontent file opens in the authoring area, as a single row table, where you can add intent and response. Each intent that you create should become associated with a response.

The left column "Intent" lets you create a new intent in a text form.
For example: "What are the Employee benefits?"

The Intent properties are shown on the right in the properties panel and represent the defining characteristics of an intent.

Name Displays the name of the intent added in the left column.

Phrases Add new alternative phrases for each intent that would have the same answer. Alternative phrases are very useful as it is impossible to predict the phrasing a user will use. Adding an alternate phrase improves the chance that the matching response is displayed for the end user, even though the main intent is not used.
For example: "What are the Employee benefits" or "What are the advantages for employees" or "Employee welfare."

Keywords Add tags and keywords associated with your content so that the user can use them in his search. Adding keywords is again very useful as the user might enter a word or two where the same information would be relevant.

ID You can enter IDs for use with the Microhelp output.

Condition Tags You can apply condition tags so that a particular intent within a group is not included when the output has the selected tag(s) applied.

You can create response to your intent by using an existing topic or snippet. To do so, follow the steps below:

To create an output preset in RoboHelp, follow these steps:

You can use the following settings to configure the various settings of the Microcontent output preset for Chatbot:

Title Specify the title for the generated output.

You can use variables in the title. To do so, type Ctrl+1 and select a variable from the drop-down list, and then press Enter. Note that if you have provided a variable set in the Content tab > Variable Set field, the value of the selected variable is picked from the variable set during output generation.

Language You can create chatbots in a number of languages to reach to a much broader audience. Specify this setting to create chatbot in one of the languages listed in the drop-down.

Use the following options to specify output settings, such as Client-info JSON and Embed Code.

The following settings contain a set of predefined messages for use with the sample agent only.  You can either accept or amend the default strings, like Welcome text, Default text, Error messages, etc. and then generate the chatbot output.

Welcome Message Use this as the first response that bot sends to the user who initiates a live chat. For example: "How can I help you?"

Default Response It's a fallback response for your messenger chatbot when a user sends a message and your chatbot is not set up to have an answer for.

Retry Message It refers to the process retrying to deliver the response that failed to be delivered. If the delivery of a response fails, the retry message is displayed.  For example: "Allow me a minute to help you."

Input Box Placeholder Text It specifies a prefedined text visible in the Chatbot UI. The text is displayed in the input field before the user enters a text of the expected format.

Error Message It is shown when the bot fails to fetch any response from the dialogflow server.  For example: "Please contact the administrator."

Embed Code Copy-paste this code in the HTML Head section in which you want to render the chatbot.

You can use the following settings to configure the various settings of the Microcontent output preset for Microhelp:

Use the following options to specify basic output settings, such as output path, format, language, and post generation script.

Format Specify the desired format for your Microcontent.

Language Specify this setting for adding language attribute in the content.

on the toolbar, select the desired output preset, and click Generate.

You can then view a progress bar in the Quick Generate dialog box. After the output generation is complete, click

To publish all files, select Republish All and click

. To view the publish log, in the Output Presets panel, against the appropriate output preset, choose

You can author a group of Microcontents and then combine them to create FAQs. To add FAQ page in Frameless output, follow these steps:

Quickly insert a Microcontent in the TOC by dragging it from the Contents panel and dropping it in the Table of Contents.