Before you build your final project, it is important to preview and test your project. Previewing allows you to verify your navigation, menus, and buttons. Adobe Encore® can also check your project for broken links, orphaned menus, bit rate problems, and other issues. When you are satisfied with your project, you can build it for different types of DVD or Blu‑ray output, including burning directly to a disc. From the Build panel, you can also export your final project to Flash format for viewing on the web.

Once you have assembled your project and set your links, you should preview and check your project before you do the final build. Previewing provides a way to evaluate the performance of your project from an audience perspective, and the Check Project feature identifies broken links, orphaned menus, bit rate problems, and a host of other disc-related issues. Once you are satisfied with your project’s performance, you build it into a file that’s ready to be burned to a disc.

You can preview the project on your computer monitor, and also preview audio or display menus on a DV device attached with an IEEE 1394 (FireWire) connection. Previewing your project as you create it, and before building it, is a necessary part of the authoring process. Previewing lets you step through the navigation and view the quality of transcoded assets. For example, a link destination may not make sense after you’ve viewed it in context with other links, or you may discover that there are problems with the quality of video or audio you have transcoded.

In addition to the actual preview, the Project Preview window displays controls for navigation and transport, zoom, audio and subtitle tracks, and the other preview functions. The navigation (menu-related) and transport (timeline-related) controls duplicate the appearance and functionality of the standard controls found on remote controls and consoles for television DVD or Blu‑ray players, as well as those found in the playback windows of computer-based players. The behavior of the transport controls, such as Play, Pause, and Skip Forward, are standard among most DVD players, but the button routing reflects the settings you specified during the authoring process.

If your authoring environment includes end-to-end video capture, editing, and playback by using additional hardware, you can preview your project on external monitors without having a FireWire connection. In such cases, you can set the player to any of the supported third-party players that lets you play back the output or preview your project in an external monitor. This setting doesn’t affect any other project settings including transcoding. See Adobe Premiere Pro Help for information about supported third-party cards.

You can choose a third-party player for playback in your project settings in Encore. You can change this setting later in the Video Playback options of the Project Settings dialog box. You customize the player settings using the utilities provided by the third-party tool. If you open this project on another computer that doesn’t have the selected player or hardware, Encore uses the default Adobe Player. In such cases, you can view your project on an external monitor through a FireWire connection.

Set the Audio/Video Out preferences (Windows)

By default, video plays on the computer monitor, and audio plays from the computer’s speakers. You can use a DV device attached with an IEEE 1394 (FireWire) connection to preview audio or menus displayed in the Menu Viewer. To do so, set the Audio/Video Out preferences as follows:

Use the following controls to preview and test your project:

Previews the current motion menu with motion instead of with a static frame. By default, Encore shows motion menus as static until they’re rendered. If you change settings for an already rendered motion menu, the preview of that menu defaults to static until you rerender the menu. The Transcode Status icon displays the current state of the menu.

Specifies the magnification of the preview.

The menu displays the available audio tracks and their language code, highlighting the currently selected track.

Toggle Subtitle Display On Or Off

Toggles the subtitle on and off. The menu displays the available subtitle tracks and their language code, highlighting the currently selected one.

indicates that the asset is transcoded; a red Transcode Status icon

indicates that the asset is untranscoded.

Previous Chapter And Next Chapter buttons

Move to the previous or next chapter. These buttons only appear when you preview movie timelines. Menus do not have chapter points, so these buttons are not available when previewing menus.

Lets you execute the end action without having to play the entire timeline.

Lets you navigate quickly to a specific chapter, rather than using the Previous Chapter/Next Chapter buttons.

Closes the preview and returns to the displayed timeline or menu.

Closes the preview and returns to the project.

By default, the Project Preview window uses a 16:9 frame aspect ratio. You can change the default ratio in order to preview widescreen projects. Preview preferences also specify the target language and region codes. These settings are used to mimic the behavior of your DVD or Blu‑ray Disc player. The Project Preview window will show you how the disc will play on devices with the matching setup.

The Check Project feature lets you check for broken links, orphaned menus and timelines, and other common problems. Use this feature to identify and correct any problems before building your DVD or Blu‑ray disc, or exporting your final project to Flash format. 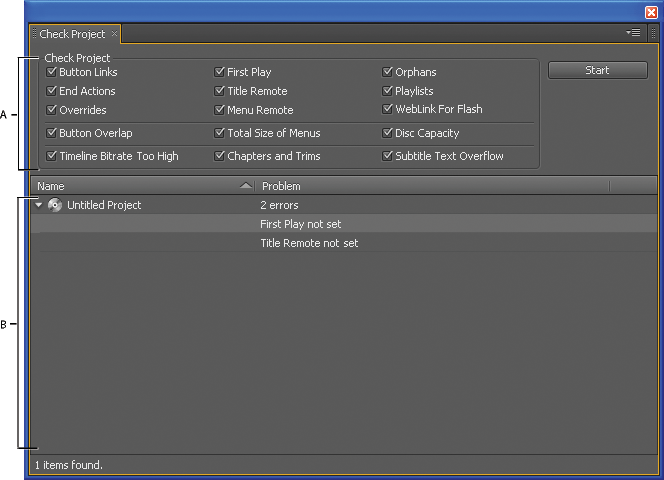 A. Check the problems you want to identify B. Double-click to open and fix a problem item

Checks that a first play action is present and valid.

Checks that the title remote property is set and valid.

Checks that all timeline menu remote properties are set and valid.

Checks all buttons that have weblinks enabled and verifies whether URLs are entered. Weblinks are applicable only if the export format is specified as Flash.

Searches for menus or timelines not used in the project.

Checks that all playlists are populated and valid.

Identifies buttons that overlap, which make it difficult for viewers to make a selection.

Checks that the total size of each menu class doesn’t exceed the DVD limit of 1 GB per class. Each aspect ratio used in an asset or different audio formats represent a distinct class.

Verifies whether the project fits on the chosen disc size.

Identifies timelines in which the combined video, audio, and subtitle bit rates exceeds the DVD or Blu‑ray limit. To reduce the bit rate, either lower the data rate by editing the transcoding preset of the timeline, or remove tracks or clips from the timeline.

Identifies chapter points and trims in timelines that were adjusted during transcoding.

Identifies subtitle text that is truncated in the subtitle box and does not appear on the screen. You can edit the specified text to fit it all in the box or increase the size of the box.