Differences between features in iOS and Android

In this article, you learn some of the differences that are between the Android and the iOS platforms and which can be seen as well in DPS. The sample files in this article contain an HTML implementation of the workarounds and which can be made so that the scenarios become similar on both platforms. The templates use APIs that allow you to duplicate functionalities found in the default library and customize it to fit your project.

If the authentication calls are made directly from the custom storefront, using Javascript code and the available authentication APIs, there is a difference between the way the Viewer reacts on iOS versus Android. On iOS, the updateLibrary function is called automatically after the user is logged in. However, on Android, this function is called in the JavaScript code, so that the library is refreshed, after the user is logged in.

NOTE: The example below is using the Entitlement Server V2.

This option can be set for every account from the Account Administration tool of the Digital Publishing Suite. 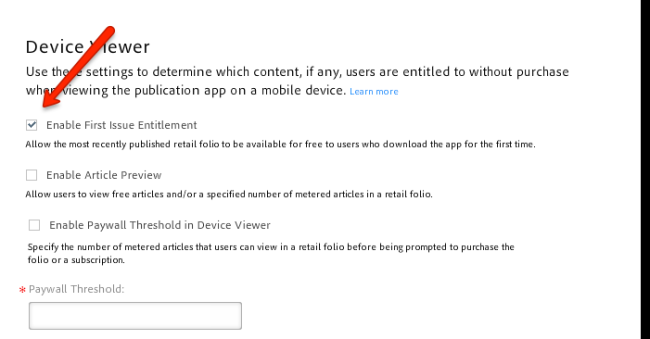 Feature not supported on Android

Being enabled, this feature entitles the most recently published retail folio to first-time users of an app. That way, when users download the app from the App Store, the most current issue can start downloading, providing a better initial experience for some publications. However at this stage, the First Folio Free is not a supported feature on Android. While the Android AppBuilder allows the First Folio Free to be selected, you should leave this option disabled. This is because of the fact that on Android platform, every time you install or un-install an application the sessionId changes. It is known that's one of the most important differences between iOS and Android platforms.

The call that shows that this option was selected or not is the one presented below. This is a POST method to subscriber.adobepublish.com which response contains the entitled productId corresponding to the folio. 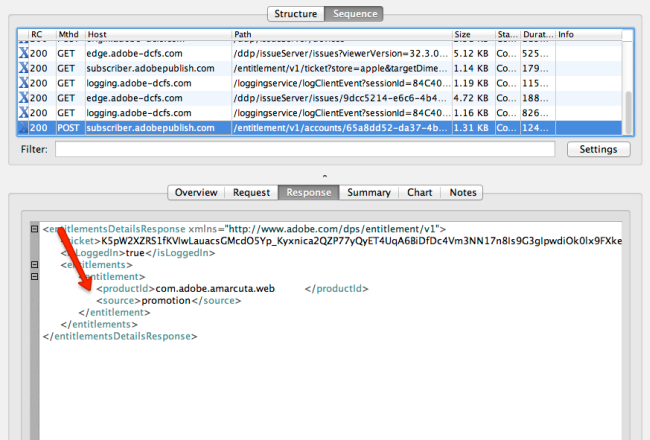 Here are some screenshots of the calls that are captured in Charles during the login process:

The viewer logs in to Third-Party Entitlement Server making the SignInWithCredentials call to get the auth token and sends it to Adobe entitlement service. In this example, the entitlement server URL is https://dps.tukker.org.

The call that sends it to Adobe server is the second one in the iOS screenshot and the third one on Android. It accesses the address https://subscriber.adobepublish.com and the URL contains the integratorId and the accountId. Its response should create a unique ticket which is used further. Now, the device is marked as logged in.

The call to the http://edge.adobe-dcfs.com extracts the list of the productId that are created in the database for that specific account. It contains the accountId, sessionId, viewerVersion, and other details.

The last call from the Figure 1. is the one that differs on iOS than Android. That call is the one that update the library for the new logged in user. The response of this call contains the list of productIds that the user is entitled to. This is the call that needs to be done manually on Android and that is included in the sample code attached.

During development, Adobe recommends that you first build and test your content on the desktop using Safari. This will allow you to adjust the user interface (UI) without having to generate a new viewer to see each change. When testing on your desktop, the API file is not available, so the viewer loads the data from the Adobe fulfillment XML feed.

While testing on the desktop, ensure that you remove the include for AdobeLibraryAPI.js in the index.html file — otherwise you can't view the files in the desktop browser. When testing on the desktop, if nothing displays, open the debugger to check whether there are file paths that cannot be resolved. For more details on how to use the debugger, have a look on these two articles: Debugging a custom iOS storefront or library and Remote Debugging on Android with Chrome

The following list contains descriptions of the key files in the template:

Modifying the sample for your Digital Publishing Suite projects

To use of this template, simply upload the .zip file to your Android App Builder and make sure that you have already correctly setup your Entitlement Server including your own integratorId that is added to the Adobe database. 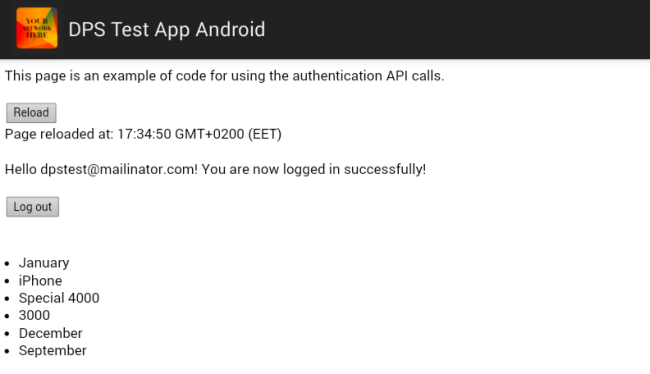 Here is what the custom code does:

Here are the API calls used in this example:

Where to go from here

In this article, you learned how to modify and add a custom library/store that contains the all the authentication calls. Also, you know how to use them so that you customize your own custom store. If you would like more information on the JavaScript libraries used, check out the documentation for Backbone, jQuery, and Underscore. See additional articles and videos available for Digital Publishing Suite on the Adobe Developer Connection.

There are also the following articles that can be ver useful: