Interpolation is the process of filling in the unknown data between two known values. In digital video and film, this usually means generating new values between two keyframes. For example, if you want a graphic element (such as a title) to move fifty pixels across the screen to the left, and you want it to do so in 15 frames, you’d set the position of the graphic in the first and 15th frames, and mark them both as keyframes. Then the software would complete the work of interpolating the frames in between to make the movement appear smooth. Because interpolation generates all the frames between the two keyframes, interpolation is sometimes called tweening. Interpolation between keyframes can be used to animate movement, effects, audio levels, image adjustments, transparency, color changes, and many other visual and auditory elements.

applies the selected interpolation method to changes in motion. You can use Temporal Interpolation, for example, to determine whether an object moves evenly or accelerates across a motion path. You can apply temporal interpolation of keyframes to only a few effects in Premiere Pro.

applies the selected interpolation method to changes in shape. You can use Spatial Interpolation, for example, to determine whether corners should be rounded or angular. You can apply spatial interpolation to the keyframes of many effects in Premiere Pro.

Creates an evenly-paced change from one keyframe to another, with each in-between frame given an equal share of the changed value. Changes created with linear interpolation start and stop abruptly and develop at a constant rate between each pair of keyframes.

Allows the rate of change to accelerate or decelerate based on the shape of a Bezier curve, such as gently picking up speed at the first keyframe and then slowly decelerating into the second.

By changing and adjusting keyframe interpolation, you gain precise control over the rate of changes in your animations. You can choose either an interpolation type from a context menu or you can directly change one keyframe type to another by manually adjusting the keyframe or the handles.

You can also use the Ease In and Ease Out commands to quickly adjust keyframe interpolation.

Changing keyframe interpolation for the Position property of the Motion effect

Bezier handles are two-directional controls that change the curve of the line segment between the handle and the next point on either side. The farther you pull a handle from its keyframe (center point), the more the line bends or curves. The curve that you create by dragging the Bezier handle determines how smoothly the effect changes occur as the animation property approaches and leaves a keyframe. These handles offer you more control over animation changes than simply choosing a keyframe interpolation method. You can manipulate Bezier handles in either a Timeline panel, the Effect Controls panel, or the Program Monitor.

Fine-tune the speed of an effect

In the Effect Controls panel, you can use the Velocity graph to adjust motion or the rate of change for a value just before and just after a keyframe. Such adjustments can simulate real-world motion. For example, you can change the motion of a clip so that it slows down just before a keyframe and then speeds up just after the keyframe. You can control the values approaching and leaving a keyframe together, or you can control each value separately. 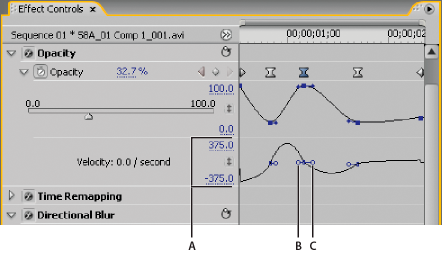