Adobe Audition lets you use advanced post-production techniques to create and edit audio. If you have installed Adobe Audition, you can apply the Edit In Adobe Audition command to an audio clip or a sequence.

When you apply the Edit In Audition command to an audio clip, the clip is rendered and replaced into a new Wave file which is directly opened in Audition. The original audio material is retained if you choose to edit the audio file in Audition but only the copied audio is changed.

If an In/Out range was marked in Premiere Pro, these markers become visible in Audition. When the clip is edited and saved in Audition, the changes made to the clip is directly reflected in the Premiere Pro Timeline panel. Effects or markers applied to the original sequence clip are preserved in the edited clip.

The Edit In Audition command is not available for Adobe Dynamic Link clips.

When applying the Edit Sequence in Audition command, Premiere Pro sends the currently selected sequence with rendered audio for further compositing to Audition. The sequence opens in Audition as a Multitrack Session.

To send a Premiere Pro project to Audition, follow these steps:

The Edit In Adobe Audition dialog lets you configure certain properties for the generated Project that is sent to Audition. 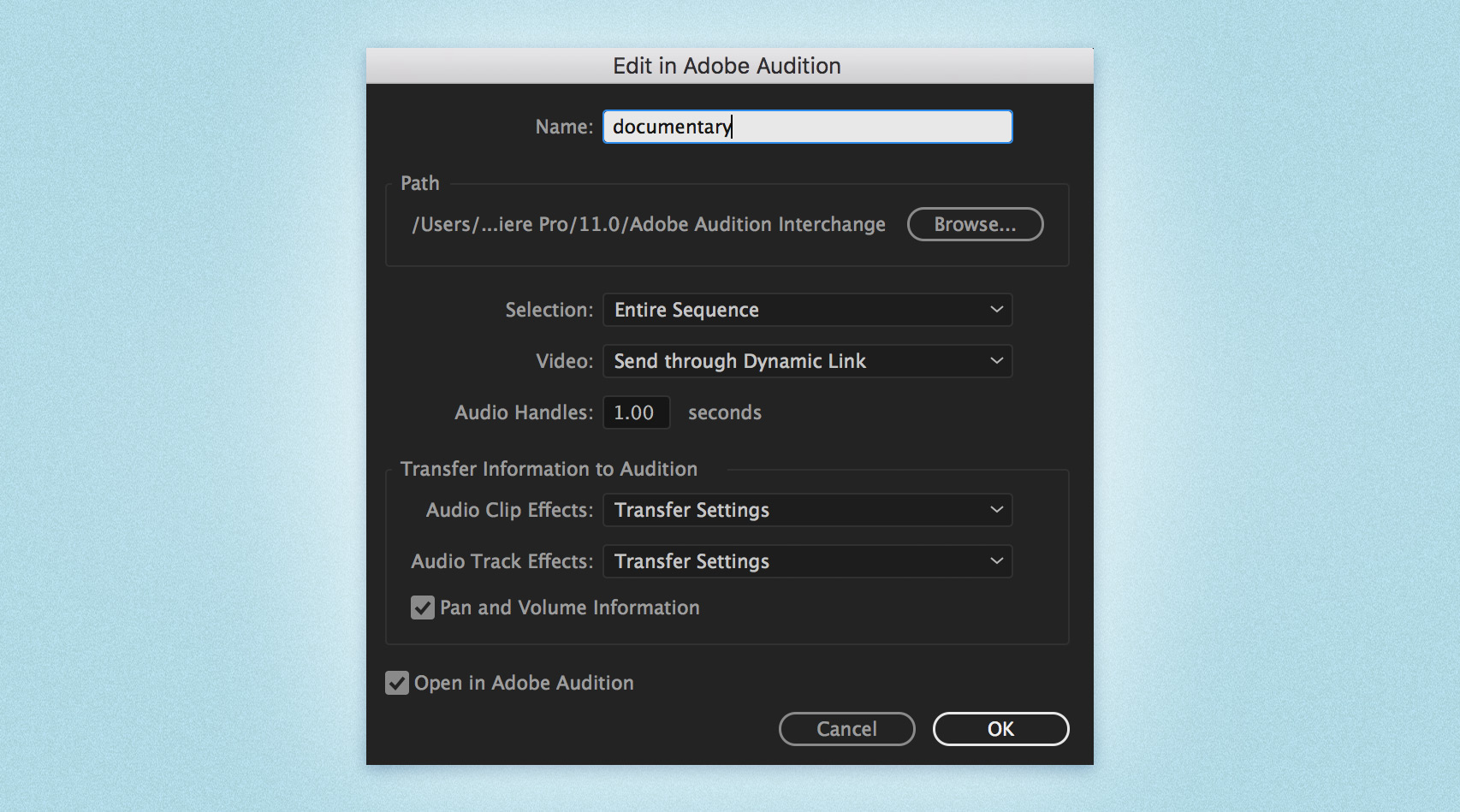 Name and Path of the Project generated (defaults to the sequence name which will be send to Audition).

Selection can be either the whole sequence or the In/Out (selection) points of the Sequence.

Audio Handles refer to the content of the clip beyond the clip boundaries. If the clip in the sequence has a length of 10 -seconds and Audio Handles is set to 1 -second, the rendered Audio File has the duration of 12 -seconds with 1 -second more material at the front and end.

Adobe Audition and Adobe Premiere Pro share many audio effects, letting you to transfer information of the audio effects. Audio effects can be instantiated again in Audition without rendering the audio clip.

If the particular effect is not available in Audition, it is added as Offline Effect to the Clip effects rack.

If the particular effect is not available in Audition, it is  added as offline effect to the Clip effects rack.

If checked, launches Audition and directly open the generated project.

This option is only enabled if Audition is installed