About character sets and alternate glyphs

Typefaces include many characters in addition to the ones you see on your keyboard. Depending on the font, these characters can include ligatures, fractions, swashes, ornaments, ordinals, titling and stylistic alternates, superior and inferior characters, old‑style figures, and lining figures. A glyph is a specific form of a character. For example, in certain fonts, the capital letter A is available in several forms, such as swash and small cap.

There are three ways to insert alternate glyphs:

When you're working on a type object, you can select a character to quickly view alternate glyphs right next to it in the in-context menu. Simply click the alternate glyph to replace the character with it.

icon to the right of the displayed alternate glyphs. Click the

icon to open the Glyphs panel and view more alternatives.

You use the Glyphs panel (Window > Type > Glyphs) to view the glyphs in a font and insert specific glyphs in your document.

By default, the Glyphs panel displays all the glyphs for the currently selected font. You can change the font by selecting a different font family and style at the bottom of the panel. If any characters are currently selected in your document, you can display alternate characters by selecting Alternates For Current Selection from the Show menu at the top of the panel.

When you select an OpenType font in the Glyphs panel, you can restrict the panel to display certain kinds of glyphs by selecting a category from the Show menu. You can also display a pop‑up menu of alternate glyphs by clicking the triangle in the lower right corner of the glyph box where applicable.

Insert or replace a character using the Glyphs panel

You use the OpenType panel (Window > Type > OpenType) to specify how you want to apply alternate characters in OpenType fonts. For example, you can specify that you want to use standard ligatures in new or existing text.

Keep in mind that OpenType fonts vary greatly in the kinds of features they offer; not all options in the OpenType panel are available in every font. You can view the characters in a font using the Glyphs panel. 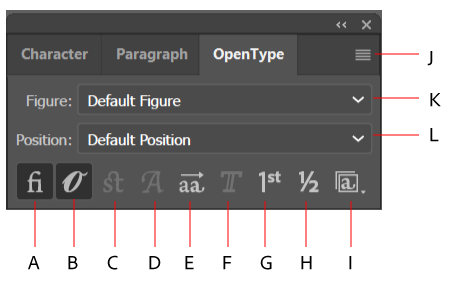 Additional features may be available for Asian OpenType fonts.

You can access additional commands and options in the OpenType panel menu in the upper right corner of the panel.

Highlight alternate glyphs in the text

Use ligatures and contextual alternates

Contextual alternates are alternate characters included in some script typefaces to provide better joining behavior. For example, when using Caflisch Script Pro with contextual alternates enabled, the letter pair “bl” in the word “bloom” is joined so that it looks more like handwriting.

You can remove the stylistic set that you’ve applied to a text range by deselecting it in the OpenType panel or the Glyphs panel.

You can insert a break character to start a new line without starting a new paragraph.

To make the characters visible as you format and edit type, choose Type > Show Hidden Characters. A check mark indicates that nonprinting characters are visible.