About imported files and footage items

You import source files into a project as the basis for footage items and use them as sources for layers. The same file can be the source for multiple footage items, each with its own interpretation settings. Each footage item can be used as the source for one or more layers. You work with collections of layers in a composition.

You primarily work with footage items in the Project panel. You can use the Footage panel to evaluate footage and perform simple editing tasks, such as trimming the duration of a footage item.

When you import files, After Effects does not copy the image data itself into your project but creates a reference link to the source of the footage item, which keeps project files relatively small.

If you delete, rename, or move an imported source file, you break the reference link to that file. When a link is broken, the name of the source file appears in italics in the Project panel, and the File Path column lists it as missing. If the footage item is available, you can reestablish the link—usually just by double-clicking the item and selecting the file again.

You can find footage items for which the source items are missing by typing missing in the search field in the Project panel. See Search and filter in the Timeline, Project, and Effects & Presets panels.

To save time and minimize the size and complexity of a project, import a source item as a single footage item and then use it multiple times in a composition. It is occasionally useful, however, to duplicate a footage item and interpret each differently. For example, you can use the same footage at two different frame rates.

If you use another application to modify a footage item that is used in a project, the changes appear in After Effects the next time that you open the project or select the footage item and choose File > Reload Footage.

To replace the source footage item for a layer with another footage item, without affecting changes made to the layer properties, select the layer and then Alt-drag (Windows) or Option-drag (Mac OS) the new footage item onto the layer in the Timeline panel.

When After Effects imports video and audio in some formats, it processes and caches versions of these items that it can readily access when generating previews. This caching greatly improves performance for previews, because the video and audio items do not need to be reprocessed for each preview.

For more information about importing assets, see this video tutorial on the Creative COW website by Andrew Devis.

After Effects can natively decode and encode QuickTime (.mov) files using the GoPro CineForm codecs on Mac OS and Windows. This means that you do not need to install additional codecs to use and create such files.

In MOV, After Effects has native import support for the following uncompressed formats:

Native export support is available for the following uncompressed formats:

Because After Effects can natively import and export many codecs (listed above), QuickTime is not required on Windows. For more details about compatibility issues, read the blog post QuickTime on Windows

Some filename extensions—such as MOV, AVI, MXF, FLV, and F4V—denote container file formats rather than denoting a specific audio, video, or image data format. Container files can contain data encoded using various compression and encoding schemes. After Effects can import these container files, but the ability to import the data that they contain is dependent on which codecs (specifically, decoders) are installed.

By installing additional codecs, you can extend the ability of After Effects to import additional file types. Many codecs must be installed into the operating system (Windows or Mac OS) and work as a component inside the QuickTime or Video for Windows formats. Contact the manufacturer of your hardware or software for more information about codecs that work with the files that your specific devices or applications create.

3D Channel effect plug-ins from fnord software are included with After Effects to provide access to multiple layers and channels of OpenEXR files. (See Using channels in OpenEXR files.)

You can import files of any still-image format as a sequence. See Preparing and importing still images.

You can also import Final Cut Pro projects into Premiere Pro and then bring that project's components into After Effects.

You can import media files into your project either by using the Import dialog box or by dragging. The imported footage items appear in the Project panel.

The interpretation settings tell After Effects the following about each footage item:

Generally, you don’t need to change interpretation settings. However, if a footage item isn’t of a common kind, After Effects may need additional information from you to interpret it correctly.

You can use the controls in the Color Management section of the Interpret Footage dialog box to tell After Effects how to interpret the color information in a footage item. This step is usually only necessary when the footage item does not contain an embedded color profile.

When you preview in the Footage panel, you see the results of the footage interpretation operations.

Jeff Almasol provides a script on his redefinery website that you can use to make guessing the 3:2 pulldown, 24Pa pulldown, or alpha channel interpretation more convenient.

Select Preview in the Interpret Footage dialog box to preview the results of the settings made in this dialog box before you accept the changes.

You can ensure that different footage items use the same settings by copying interpretation settings from one item and applying them to others.

Locations of the interpretation rules file in After Effects:

Locations of the interpretation rules file in previous versions of After Effects:

Image files with alpha channels store transparency information in one of two ways: straight or premultiplied. Although the alpha channels are the same, the color channels differ.

Setting the alpha channel interpretation correctly can prevent problems when you import a file, such as undesirable colors at the edge of an image or a loss of image quality at the edges of the alpha channel. For example, if channels are interpreted as straight when they are actually premultiplied, semitransparent areas retain some of the background color. If a color inaccuracy, such as a halo, appears along the semitransparent edges in a composition, try changing the interpretation method. 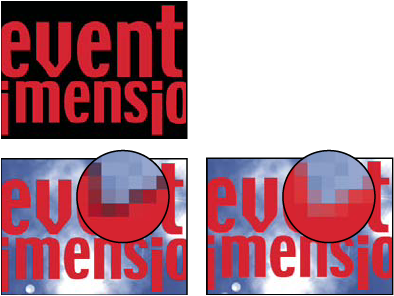 You can use the Remove Color Matting effect to remove the fringes from the semi-transparent areas of a layer by unmultiplying it.

After Effects contains a menu for drop-frame or non-drop-frame timecode in the Composition Settings dialog box. In previous releases, this option was a global setting per project.

Setting the composition frame rate to twice the rate of the output format causes After Effects to display each field of interlaced source footage as its own, separate frame in the Composition panel. This process lets you set keyframes on individual fields and gain precision when animating masks.

When you render a movie for final output, you can choose to use the composition frame rate or another frame rate. The ability to set the frame rate for each output module is useful when you are using the same composition to create output for multiple media.

You can set any frame rate field up to a maximum of 999 fps in the April 2017 release of After Effects. The update lets you use higher frame rates for rendering, unlike the earlier versions where the maximum frame rate you could set for a composition was 99 fps.

Conforming can change the synchronization of visual footage that has an audio track, because changing the frame rate changes the duration of the video but leaves the audio unchanged. If you want to stretch both audio and video, use the Time Stretch command. (See Time-stretch a layer.) Keyframes applied to the source footage remain at their original locations (which retains their synchronization within the composition but not the visual content of the layer). You may need to adjust keyframe locations after conforming a footage item.

When you import a sequence of still images, it assumes the frame rate specified by the Sequence Footage preference in the Import category. The default rate is 30 frames per second (fps). You can change the frame rate after importing by reinterpreting the footage item. (See Interpret footage items.)

Trish and Chris Meyer provide tips and tricks regarding conforming footage items to a specific frame rate in an article (PDF) on Artbeats website.

Jeff Almasol provides a script on is redefinery website to set the frame rate and duration of the current composition and all compositions nested within it.

If you display nonsquare pixels on a square-pixel monitor without alteration, images and motion appear distorted; for example, circles distort into ellipses. However, when displayed on a video monitor, the images are correct. When you import D1 NTSC or DV source footage into After Effects, the image looks slightly wider than it does on a D1 or DV system. (D1 PAL footage looks slightly narrower.) The opposite occurs when you import anamorphic footage using D1/DV NTSC Widescreen or D1/DV PAL Widescreen. Widescreen video formats have a frame aspect ratio of 16:9. 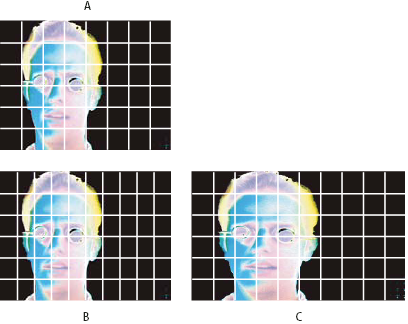 After Effects reads and writes pixel aspect ratios directly from QuickTime movies. For example, if you import a movie captured as widescreen (16:9 DV), After Effects automatically tags it correctly. Similarly, AVI and PSD files contain information that explicitly indicates the pixel aspect ratio of the images.

Trish and Chris Meyer provide tips and tricks regarding pixel aspect ratio in two PDF documents on the Artbeats website:

Todd Kopriva summarizes information about the corrected pixel aspect ratios in a post on the Adobe website.

The following table provides details about pixel aspect ratio values in After Effects:

New projects and compositions created in After Effects CS4 and later use the correct pixel aspect ratio values by default.

If you have a custom interpretation rules file, then you should update it with the correct pixel aspect ratio values.