Use Graphic Styles in Adobe Muse

Learn how to create and use graphic styles in Adobe Muse.

Adobe Muse provides an intuitive mechanism to save and reuse styles applied to objects on a web page. Creating and reusing styles is an easy way to achieve consistency in design and appearance across all pages of your web site. Styles also allow you to quickly update your website without having to redo coloring, fonts, text formatting, and so on.

Using the styles within Muse allows you to achieve the following things:

What are Graphic Styles?

A graphic style is a set of reusable appearance attributes. Graphic styles allow you to quickly change the look of an object; for example, you can change its fill and stroke color, alter its transparency, and apply effects in one step.

Styling graphics can include adding fill color to shapes, adding effects such as shadow and bevel to images, adding colors to shape outlines, and so on. Such styling can be preserved using the Graphic Styles panel within Adobe Muse. Once created, a graphic style can be reused throughout the website styling graphics and eventually the whole website at the click of a button. 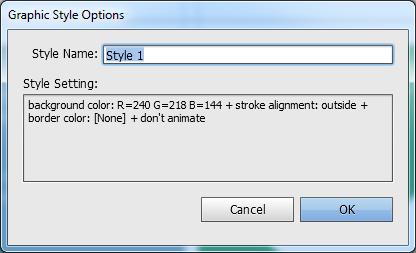 To apply a Graphic Style you created, do the following:

To unlink or dissociate a Graphic object from a Graphic Style, do the following:

Unlinking a graphic style simply dissociates the object from the said Graphic Style, but does not remove any styling attributes such as fill, stroke, or effects.

You can redefine a Graphic Style to instantly update its Style Settings. It is common design practice to change styling attributes, thereby creating Style Overrides. Adobe Muse indicates such overrides with a + sign.

Adobe Muse allows you to preserve or clear style overrides. You can preserve overrides by redefining a style.

To clear style overrides, do the following:

The Clear All Styling option allows you to remove all styling attributes applied to a graphic object, and reset to no fill, stroke, and effects.

Go To Style Use

You can now track and manage usage of styles across your site. The new Go to Style Use option lets you displays full list of pages in your website where a Graphic Style is used.