Use this topic to learn how to add or edit scripts

You can only copy scripts to a project for which you are the owner, co-author, or writer.

If you import a script, Adobe Story formats it and creates a scene outline.

You can change the element in a scene using the Element menu or keyboard shortcuts. You can also right-click the Scene element, and choose from the menu. The character, parenthetical, and the first line of the dialogue are always kept together. When there is insufficient space to accommodate the three elements at the end of a page, they are automatically moved to the next page with contd. mentioned.

The Action element is automatically converted to Scene Heading when you enter INT, EXT, I/E, or E/I in the beginning. However, auto-conversion doesn’t happen when you copy content to the Action element.

Adobe Story provides you with many options that help making the script writing process simpler and more efficient.

When you enable Auto-Complete, a list of options is displayed when you type the first few letters of a word that Adobe Story recognizes. Instead of typing the entire word, you can select an option from the menu.

For scene elements, a list of options is displayed when you insert the scene element. For example, if you are typing a scene heading with a location mentioned earlier, Adobe Story prompts with a list of locations matching the text. Click the location in the menu that appears. The location is added at the cursor location.

Following are the auto-complete options for inserting scene elements:

The formatting toolbar provides you with options to format text in a document.

The toolbar is displayed only if you have enabled the option.

If a dialog does not fit on a page, the whole dialog flows to the next page. This prevents a dialog from breaking across pages.

When the following sequence of elements does not fit a page, the whole sequence is wrapped to the next page:

This ensures that the relevant Character and Parenthetical elements stay with the dialog a page.

You can use sticky notes to add text annotations to your scripts. To insert sticky notes, select Insert > Sticky Notes. You can modify sticky notes in the following ways: Use the following steps to add additional info in your documents: 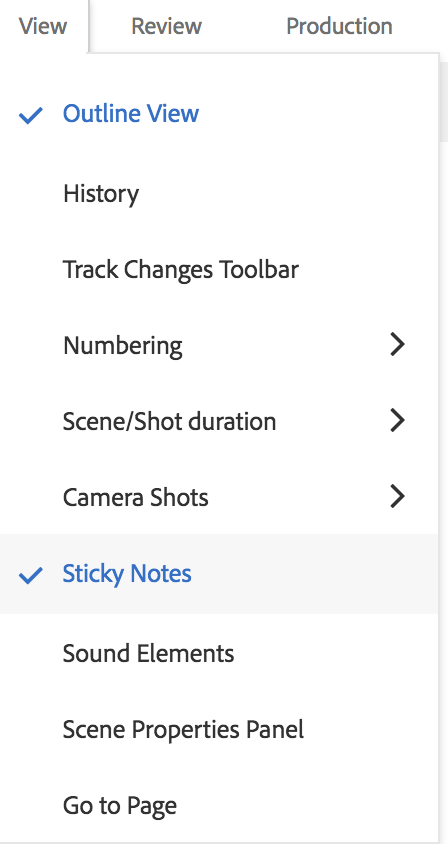 Overlays are anything you draw on your script pad, which is not text. For example, scene numbers, camera shots, and sound elements. You can hide or show the overlays in your document. To show the overlays, open the View menu and select the overlay type. Visible overlays display a tick mark next to them.

If you want to remove an overlay, open the View menu and unselect the particular overlay type. When you print the document, the hidden overlays are not visible.

You can save a script to disk as a file with a .stdoc extension.

Following are the elements of the panel:

You can also edit the non-speaking character list. To modify the list, click Edit, EDIT NON-SPEAKING CHARACTERS dialog is displayed. You can perform the following tasks in the dialog:

For more information on how to log in to the Flex version, see Scene properties panel.

Information about various versions of the script is displayed in the History panel. Information includes version number, author, and the time stamp. The content that you entered in the Description section when versioning a document is displayed when you move your mouse over the Comment icon. By default, the current version is selected and is editable. Older versions of your documents can only be viewed.

Versioning a document helps create a history for the document, and monitor changes to a document over time. Versions are created in two ways:

You can restore and delete different versions of your documents. In History panel, click the three dots icon next to the version you want to delete or restore. You get a list of actions you can perform. Select one of the following options: 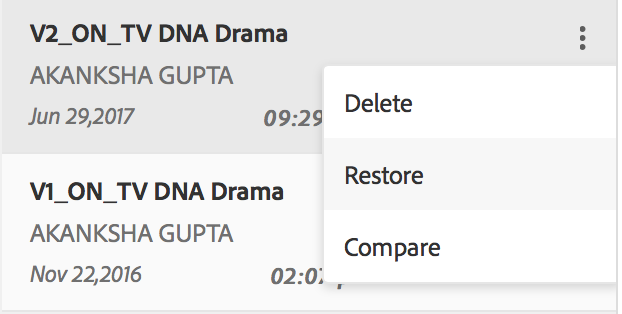 You can compare two versions of a document with the Compare option. In History panel, click the three dots icon next to the version you want to compare and select Compare from the list. You can:

You can keep two versions of your document next to each other and compare them. The top of the document shows the version number, name, and the date the document was last saved. You can edit the document as you compare and the changes are synced.

You can customize templates for different purposes within Adobe Story. For more information, see Customizing templates for scripts.

You can import following film and TV templates to your new script documents:

Use the following steps to import templates in to new script documents:

For TV and film scripts, you can switch to any template from the currently applied template available under that particular script format. To switch, use the following steps: